The cuneiform tablets and other artifacts were reportedly recovered from a private collection in Norway. 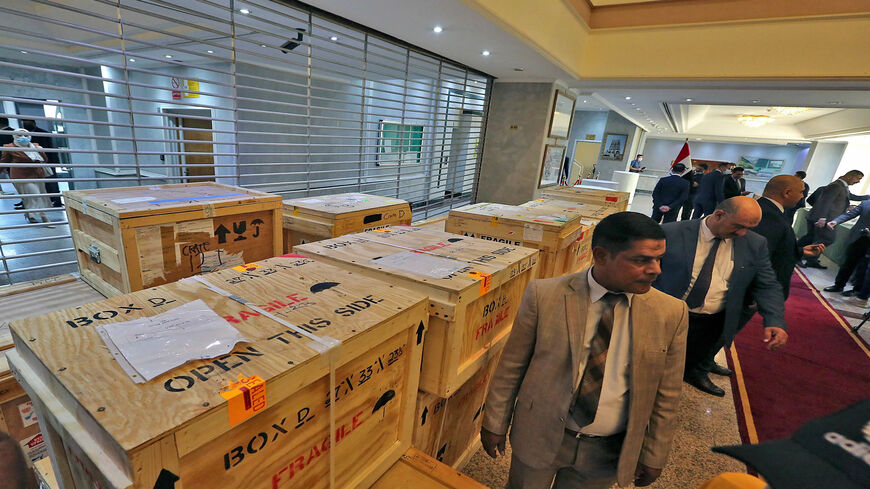 Staff members at the Ministry of Foreign Affairs work around crates of looted Iraqi antiquities returned by the United States, ahead of a handover ceremony at the ministry in Baghdad, Iraq, Aug. 3, 2021. - Sabah Arar/AFP via Getty Images

Norwegian police have seized a heap of Mesopotamian artifacts in southeast Norway, which the Iraqi government has requested be repatriated.

Authorities on Friday said the seizure consisted of what are presumed to be cuneiform tablets and other archaeological objects from ancient Mesopotamia. Experts are now examining the objects to determine their authenticity and possible origin. AFP reports the Iraqi government had submitted a restitution request to Norway’s Ministry of Culture.

“In total, almost 100 objects of significance to the global cultural heritage have been seized," the Norwegian National Authority for Investigation and Prosecution of Economic and Environmental Crime said in a statement.

The statement didn’t say whom the artifacts were seized from, or how they were smuggled into Norway. A police spokesperson told Reuters that the items were part of a private collection and that no criminal charges had been filed.

Thousands of antiquities were looted from Iraq’s museums amid the chaos of the American invasion, with as many as 15,000 disappearing when the National Museum of Iraq in Baghdad was ransacked in 2003.

In what Baghdad describes as its largest-ever repatriation of looted treasures, Iraqi officials said 17,000 artifacts were returned last month from the United States, many of which were in the possession of Hobby Lobby. As part of a 2017 settlement with the Justice Department, the arts-and-crafts chain agreed to forfeit its collection, which included the 3,500-year-old clay "Gilgamesh Dream Tablet.”

Last October, the British government said it would return nearly 5,000 artifacts to Iraq that were excavated by a team of British archaeologists in the early 20th century. Included in the repatriation was a 4,000-year-old Sumerian plaque that museum experts discovered for sale by an online auctioneer in May 2019.