Iraq eager to get back antiquities smuggled to US

Iraq is diligently working to recover relics from the United States that were looted from Iraqi archaeological sites. 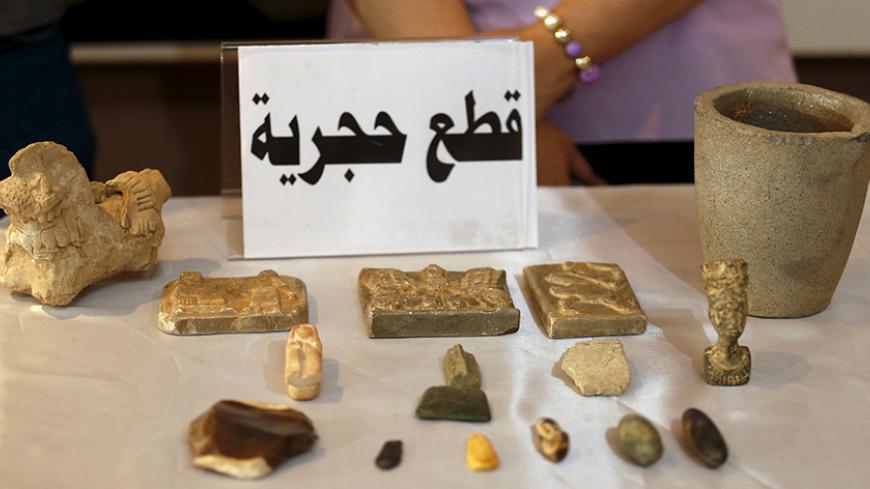 Recovered smuggled artifacts that have been handed back by the United States are seen at the National Museum of Iraq in Baghdad, Iraq, July 15, 2015. - REUTERS/Thaier Al-Sudani

“Iraqi and US officials are in constant contact, and the smuggled artifacts are in safe hands now with the US Homeland Security and the US judiciary, which will issue a final verdict on the case," Maysoon al-Damluji, a member of the Iraqi parliament's Committee of Culture and Information, told Al-Monitor. "Meanwhile, the Iraqi Embassy is communicating with the US State Department to retrieve the artifacts."

Hobby Lobby was fined $3 million in July for buying some 5,500 artifacts in 2010 that had been smuggled into the United States through a dealer based in the United Arab Emirates (UAE), according to the US Justice Department. The company paid $1.6 million for the items, which were sent to three different addresses of the company in Oklahoma City. The antiquities include clay cuneiform tablets, cylinder seals and ancient clay bullae that were used to place authenticating seals on documents.

Damluji said, “The course of things is in favor of Iraq to recover its archaeological pieces. It is only a matter of the time needed for administrative and legal procedures in the United States.”

She was confident when she told Al-Monitor, "There is an atmosphere of optimism regarding positive responses from the United States to this effect, given the existent law ... whereby the trade in Iraqi artifacts and antiquities is not allowed, unlike the Gulf countries, including the UAE. A UAE-based dealer was involved in the [latest] smuggling operation because the UAE is not among the list of countries acceding to the UNESCO convention on smuggling of antiquities.”

The Iraqi Embassy in London and a legal team will work with the US Justice Department, "which has the final decision on the issue of returning the stolen artifacts to their rightful owners,” Damluji said. Moreover, under a 2015 UN Security Council resolution, countries are required to return smuggled or looted antiquities to their countries of origin.

The Justice Department said the Hobby Lobby acquisition "was fraught with red flags" and Hobby Lobby even ignored the warning of an expert it had hired who said the items might have been looted from Iraq. The company never met with the dealer who claimed to own the artifacts. Rather, a different dealer had the company wire payment to the personal bank accounts of seven other people, the Justice Department said.

Iraq has a history of fighting to retrieve its stolen antiquities and has recovered 4,300 artifacts smuggled out of the country since 2014 after Islamic State (IS) militants seized control of vast areas of the country's north, east and west.

The United States pledged a year ago to protect and restore historic sites and museums in Iraq, according to the US State Department’s top adviser on Iraqi cultural heritage, John Russell.

A source at the US Embassy in Baghdad, who asked not to be named, said that “the embassy’s instructions regarding smuggling cases are very strict.”

Even before the Hobby Lobby case, government sources revealed that the Iraqi Embassy in Washington was following up on more than 5,000 antiquities smuggled from Iraq after 2003. The Iraqi Embassy in Cairo also has sought to restore manuscripts and other items smuggled to Cairo from Iraqi monasteries and churches in Mosul. In 2016, Iraq recovered the head of the King Sanatruq I statue, which is one the significant monuments registered in the Iraqi Museum of Antiquities. The statute was stolen in 2003.

Iyad al-Shammari, rapporteur of the parliamentary Committee of Antiquities, told Al-Monitor that the Public Authority for Antiquities in Iraq has contacted UNESCO "to urge the United States to hand over [any] stolen Iraqi artifacts," and he expressed great hope of solving the issue soon. “Iraq has been preoccupied for years in trying to retrieve antiquities smuggled outside,” he said, adding that “some of the archaeological pieces were lost and sold on the black market.”

In 2016, artifacts smuggled from Syria and Iraq were being sold on eBay. Shammari stressed that the “Iraqi Ministry of Culture addressed the US Embassy in Baghdad to start the official and necessary procedures to recover the smuggled artifacts.”

Iraq also plans investigations to obtain the names of smugglers.