Iraq has managed to recover some smuggled antiquities, but illegal excavations and the theft of ancient artifacts continue. 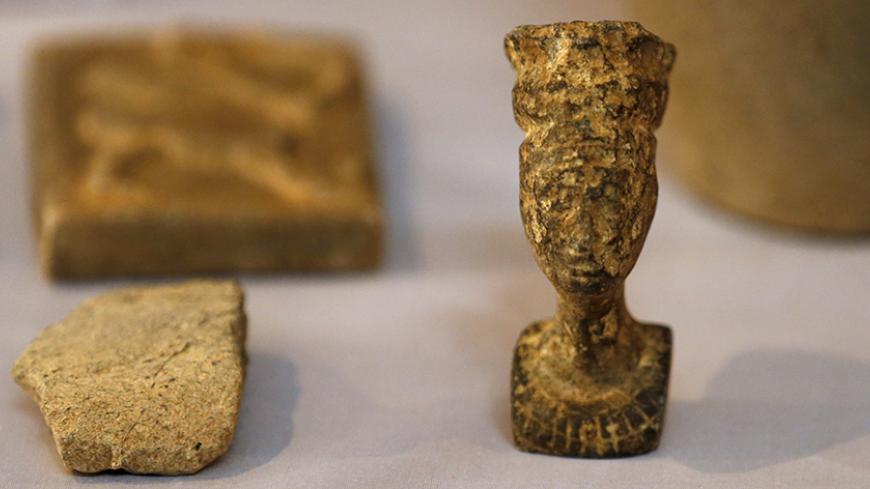 Recovered artifacts are seen at the National Museum of Iraq in Baghdad, July 15, 2015. The antiquities were handed back to Iraq by the United States, having been seized in a raid on Islamic State fighters in Syria. - REUTERS/Thaier Al-Sudani

BAGHDAD — On Aug. 30, the Iraqi Integrity Court announced the recovery of the head of the statue of King Sanatruq I, who reigned from roughly 140 to 180, which is an important Babylonian monument that is registered in the records of the Iraqi Museum of Antiquities. The head was stolen in April 2003. Also in August, Iraq recovered 483 artifacts that the Islamic State (IS) intended to smuggle out of Iraq.

An important step was taken in the efforts to recover Iraqi antiquities when the United States pledged last month to “protect the antiquities of Iraq and to recover what was looted,” John Russell, the US State Department’s senior adviser on Iraqi cultural heritage, said in a statement. This was confirmed by a source at the US Embassy in Baghdad who requested anonymity. The source said that the embassy’s instructions on how to deal with cases of artifacts smuggling are very strict, and that the United States is very serious about ending this phenomenon.

However, the progress in recovering Iraqi antiquities that disappeared from museums and archaeological sites is offset by signs of continued smuggling in Mosul in the country’s north, especially since IS occupied the city on June 10, 2014, and in Dhi Qar (375 kilometers south of Baghdad), where on May 24, 2016, two antiquities smugglers were arrested while in possession of old manuscripts and artifacts.

On May 24, Iraqi Foreign Minister Ibrahim al-Jaafari said, “Iraq still needs international support to curb the smuggling of antiquities as an international crime.”

On Jan. 20, an antiquities smuggler in Baghdad was arrested while in possession of old manuscripts and artifacts. On May 31, an Iraqi man tried to smuggle artifacts through Najaf airport to a neighboring country. And on April 1, 2015, in Babil province a smuggling operation was thwarted when an Iraqi smuggler tried to hand over artifacts to a foreign woman. But overall, the number of smuggling operations has significantly decreased compared with 2003, when US forces entered Iraq and brought down Saddam Hussein’s regime, according to Haidar Abdul Wahid, the director general of investigations at the Tourism and Antiquities Authority. In a statement Feb. 17, he said, “There have been significantly fewer illegal excavations in the southern provinces in Iraq after the cooperation and coordination between the Tourism and Antiquities Authority and the security forces.”

This view was reinforced by Hussein Falih, the director of Babil antiquities, who told Al-Monitor, “Smuggling is almost nonexistent in the ancient city of Babil. … The directorate began protecting the antiquities of Borsippa in southern Babel at the beginning of 2016, which would lead to fully ending the illegal excavations in the area.”

In Dhi Qar province, a research archaeologist who preferred not to be named told Al-Monitor, “The vast expanses of archaeological sites are guarded by protection staffers who do not have modern monitoring techniques. They only use primitive techniques. … The archaeological sites in Dhi Qar are subject to theft and illegal excavations on an ongoing basis. And there are no clear government plans to protect the sites.”

One of the main reasons for the continuing smuggling and illegal excavations of antiquities is the large number of archaeological sites in Iraq. They amount to roughly 13,000 sites as announced by the Ministry of Tourism and Antiquities on June 15, 2015. This number is too large for the limited protection capabilities available; even important historical sites are without adequate security protection. On April 14, a field trip by the police found that many artifacts are left out in the open.

Had there been archaeological awareness, these historic areas would have been protected despite the dearth of security protection. “This applies not only to Iraq but several Arab countries afflicted by war, such as Iraq, Syria, Libya and Yemen,” Mohamed Abdel Latif, a professor of Islamic and Coptic monuments at Egypt's Mansoura University, said April 4. He added, “The Arab countries’ civilizations have been devastated by wars and terrorism.”

Stopping illegal excavations, which are the source of smuggled artifacts, is twofold: first is security. Falah Abdul-Karim al-Khafaji, the head of the security committee in Babil province, told Al-Monitor, “The smuggling of artifacts is linked to the security chaos. The more the conditions stabilize, the more the illegal excavations recede. … There is an urgent need for preventive security measures to stop smuggling operations before they occur and to adopt modern, digital monitoring methods at archaeological sites, especially by monitoring via satellite and by supporting villagers near the sites and encouraging them to physically protect the sites.”

The second part of the solution lies in increasing archaeological awareness. Important projects that may help eradicate smuggling operations are on the horizon. On Aug. 12, the UNESCO office in Iraq produced, with the help of Norway, videos that raise awareness about protecting Iraq’s cultural heritage.

In the same context, the “National Campaign to Protect Iraqi Antiquities” was launched by activists and volunteers, calling for coordination with the Foreign Ministry to monitor the sale of Iraqi antiquities in global auctions.