As security chaos persists and jobless rates soar, little can be done to protect Iraq's thousands of archaeological sites from illegal excavations. 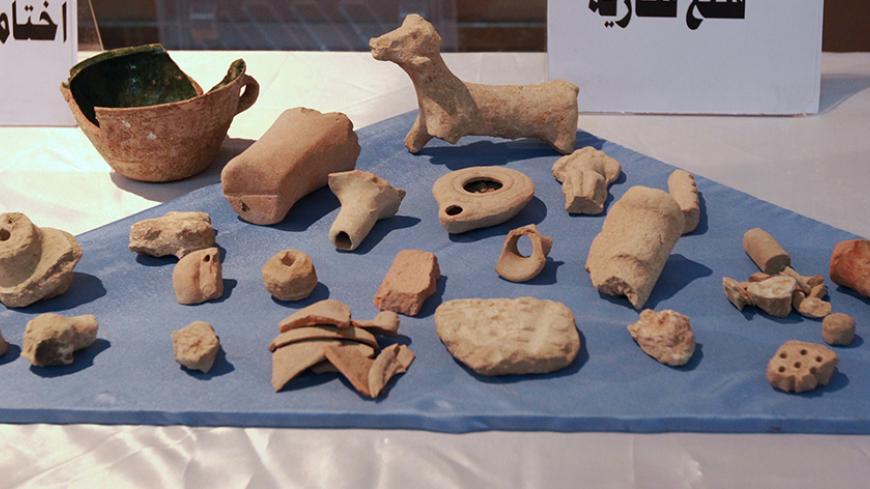 Looted artifacts that were recovered during a raid in Syria and handed back to the Iraqi authorities are seen at Iraq's National Museum, in Baghdad, July 15, 2015. - SABAH ARAR/AFP/Getty Images

BABIL, Iraq — Iraq is a great mine of antiquities, with around 13,000 historical and archaeological sites. But today, they lack protection in the absence of law and the deteriorating security conditions in the country, and thieves are free to illegally dig at these sites.

On March 14, the authorities in Tikrit, north of Baghdad, arrested gang members who had intended to smuggle out of the city artifacts from the Assyrian Empire. This incident is only one of many looting operations, Capt. Fadel Abbas from the Babil police told Al-Monitor. He said, “Archaeological sites are spread in vast areas far from cities, which makes it difficult to protect them in the absence of modern surveillance techniques.”

Al-Monitor tried to meet with illegal archaeological explorers, but to no avail. However, although their operations are carefully guarded secrets, some artifacts smugglers are identifiable. Hassan Ali, a social worker from Babil, told Al-Monitor that there are many citizens taking part in illegal archaeological excavations, explaining that they justify the crime with rampant unemployment.

Ali continued, “Some people suddenly got extremely rich in Diwaniyah and Babil. They became known as artifacts traders, but no one dares ask them about this subject. And accusing any individual may lead to tribal disagreements.”

Abbas said, “The security services are following up on those [alleged traders], but they are not doing anything about it for lack of sufficient evidence, and thus everything that is said about them is mere accusation.”

However, he stressed that it is widely known that “since 2003, illegal explorers have taken advantage of the security forces’ preoccupation with terrorism, which allowed them to gain access to archaeological sites that are not protected by the police.”

In Babil alone, there are about 1,200 archaeological sites. Falah al-Khafaji, a member of the Provincial Council for Security Affairs, told Al-Monitor, “The local government is serious about increasing the number of security guards in those areas to put an end to illegal excavation and theft of antiquities.”

The Babil province governor, Sadeq Madloul al-Sultani, told the media on March 10, “The national security forces have arrested a person who had 11 artifacts dating to the ancient Romanian civilization, which he had intended to sell to an Arab woman who was visiting Iraq.”

In an interview with Al-Monitor, Babil Provincial Council member Suhaila Abbas, who has been conducting field trips to keep tabs on the affairs of the villages and more remote areas, said that she has visited “several archaeological sites in the south of Babil and found that a lot of graves have been dug up by individuals searching for artifacts.”

Interestingly, many artifacts are not deeply buried, which makes finding them a lot easier. Sometimes rainwater is enough to unearth them, as happened March 3, when rains uncovered 114 artifacts in the Borsippa historical site in Babil province.

It is not easy to monitor the secret excavations. Sheikh Majed Kalabi from Babil told Al-Monitor, “Precious stones and beads vendors are most likely to know the details of such operations.”

Al-Monitor visited Haider al-Yasiri, a precious stones vendor in the city of Hilla in the center of Babil province. But when asked about how he deals with smuggled artifacts, he answered angrily, “There are a lot of [illegal] excavations, especially among those residing near archaeological sites, but I refuse to deal with them.”

He added, “Some offer us ancient metallic and gold coins they got from archaeological areas, but we advise them to hand them over to the competent archaeological authorities or to the security services.”

However, Yasiri pointed out that not all excavations are done with the purpose of selling artifacts, as “some explorers search for small artifacts used for religious and magical rituals.”

Besides the excavations carried out by individuals, some armed groups like the Islamic State had excavated in the city of Mosul and some of Baghdad's northern regions before they were expelled, for the purpose of smuggling and selling them to antiquities traders.

Halim Yasiri, an archaeological researcher from Babil, told Al-Monitor, “Iraqi antiquities represent the history of Mesopotamia, but Iraqis are neglecting them. There are illegal excavations in the absence of surveillance techniques such as cameras and sensors to alert [the authorities] if people sabotage archaeological sites.”

In 2015, the Iraqi Ministry of Tourism and Antiquities had launched a national campaign for the protection of Iraqi archaeology. This campaign included the documentation of archaeological sites, while encouraging people to report any archaeological materials they may find near their homes.

Yet the pillaging and vandalizing of archaeological sites and antiquities continue. Perhaps Iraq could benefit from more developed countries’ expertise in the exploration, protection and control of archaeological sites. However, this knowledge will not be able to contribute to the preservation of this heritage unless proper security and investment guarantees are provided.