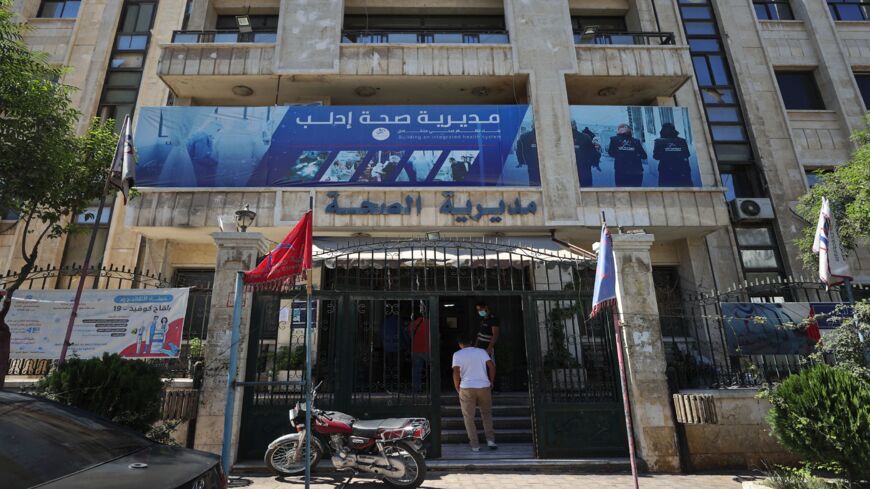 A picture shows the entrance to the Directorate of Health in the rebel-held northwestern Syrian city of Idlib on Sept. 13, 2021. Cases of Covid-19 have increased alarmingly over the past month in Syria's rebel-controlled northern region of Idlib, local authorities said today. - OMAR HAJ KADOUR/AFP via Getty Images

Northwest Syria is suffering from shortages of COVID-19 testing kits and oxygen amid an outbreak, a leading humanitarian organization said Wednesday.

The International Rescue Committee’s Syria director said the situation is worsening to levels of the previous coronavirus outbreak at the end of 2020.

“We are sincerely hoping that the severity of the situation in the first wave is not repeated, but already some patients are being turned away from community treatment centers and others are being admitted to non-COVID hospitals, increasing the risk of an outbreak in these facilities,” said Tanya Evans in a statement sent to Al-Monitor.

Northwest Syria is mostly controlled by Syrian rebels. The strongest group is the former al-Qaeda affiliate Hayat Tahrir al-Sham, which dominates the Idlib province. The hard-line Islamists have been accused of human rights abuses and recently created a morality police force. The area has been severely damaged by years of fighting with the government. Two million Syrians displaced from other parts of the country live in Idlib among a total population of more than 3 million.

The coronavirus first began to spread in northwest Syria in the summer of 2020, threatening the health system that had already been strained by years of war.

Cases are now on the up. Daily infections have increased tenfold since Aug. 1, with the peak being 1,554 cases on Sept. 6. Northwest Syria only has two weeks' worth of testing kits remaining, and the next delivery will not come for at least four weeks, Oxygen supplies are also at “critically low levels,” the International Rescue Committee said.

Positive test rates in northwest Syria are high this month, ranging from 42% to 58%. Intensive care units are also at 85% capacity, according to the committee.

Evans said test kits and oxygen are “urgently needed” and the humanitarian crossing from Turkey must remain open to help fight the virus in the area.

The International Rescue Committee is not alone in its assessment. The nongovernmental organization Save the Children released a similarly grim assessment last week.

Syria as a whole has very low vaccination rates against COVID-19. Only 55,500 vaccine doses had been administered by Aug. 11, the World Health Organization reported at the time.

Meanwhile, the Syrian government remains committed to defeating rebel groups in the northwest. Syrian and allied Russian forces have increased attacks in the area this month.