The first case of the coronavirus in Idlib follows a veto at the UN Security Council today of a resolution that would have allowed aid to reach the embattled area via Turkey. 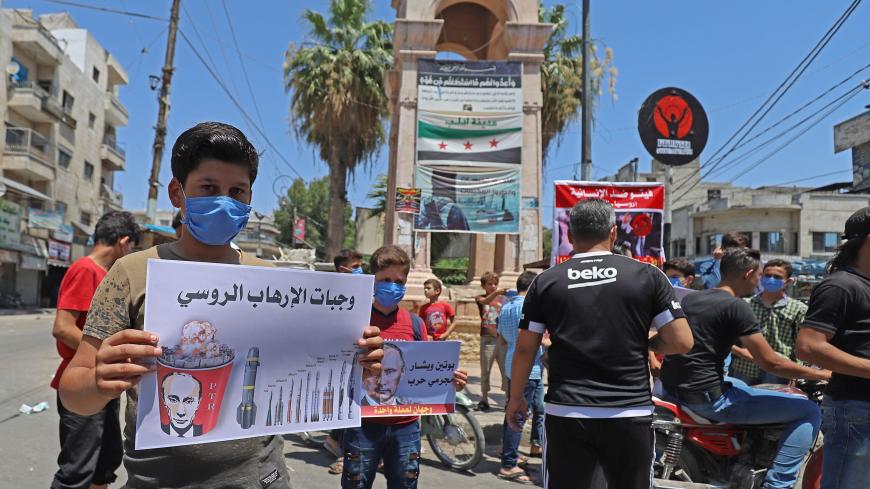 Syrian protesters in the city of Idlib carry placards on July 10, 2020, expressing their opposition to Syrian regime ally Russia's attempt to reduce cross-border aid to millions in the northwest of the war-torn country, as they wear protective masks and maintain social distancing due to the first case of the coronavirus recorded a day earlier. - Photo by ABDULAZIZ KETAZ/AFP via Getty Images

The first COVID-19 case has been confirmed in Syria’s war-torn Idlib province. Humanitarian organizations working in northwest Syria have long feared an outbreak could severely hurt the population there that is contending with massive displacement and the ongoing war between government and rebel forces.

Conditions in Idlib make it susceptible to a large outbreak, a nongovernmental organization official said. “The millions who live in this region are often residing in close quarters, may not have enough clean water for drinking and handwashing, and frequently lack the necessary resources to protect themselves,” Mercy Corps’ Syria director Kieren Barnes said in a statement sent to Al-Monitor today.

The first case of the novel coronavirus in Idlib was confirmed by local health authorities, Mercy Corps said, and reported by various local and international outlets.

Throughout the war, people in rebel-held territories have been transferred to Idlib in evacuation deals between defeated rebels and victorious government forces. This happened with east Aleppo in 2016. The result has been hundreds of thousands of displaced people coming to the province.

The government’s bid to retake the province continues despite cease-fire efforts. Government and rebel forces clashed today in a rural part of Idlib, the pro-opposition Syrian Observatory for Human Rights reported.

The conditions of war and displacement mean Idlib could experience an outbreak of the highly contagious virus. Hospitals in Idlib suspended non-emergency services after the first confirmed COVID-19 case was reported, The Associated Press reported today.

Adding to complications, Russia and China today vetoed for the second time this week a UN Security Council resolution that, by a 13-2 vote, would have allowed aid to continue to flow to northwest Syria via two crossing points with Turkey. Earlier, a Russian-drafted resolution that would have allowed one border crossing for a year received only four "yes" votes in the 15-member council, five short of the minimum of nine needed.

The resolution allowing the Turkish crossings expires today, and past crossings from Iraq and Jordan have also closed.

The head of the International Rescue Committee said the veto will hurt Idlib in light of its first COVID-19 case.

“In Idlib, civilians beleaguered by a decade of war live in cramped conditions and are in extremely poor health, putting them at increased risk of the worst effects of this disease,” David Miliband said in a statement.