Syria's northeast is left with little outside assistance to fight the coronavirus pandemic and requires much more international support. 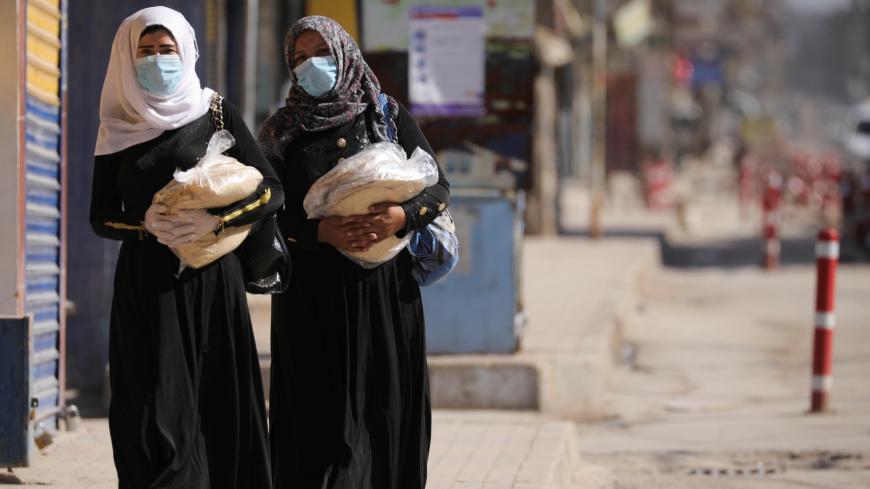 Women hold stacks of bread as they walk along an empty street, as restrictions are imposed as measure to prevent the spread of the coronavirus disease (COVID-19) in Qamishli, Syria March 23, 2020. - REUTERS/Rodi Said

The Kurdish-led autonomous administration in northeast Syria has formally confirmed the area’s first death from the coronavirus while also taking aim at the cynical nature of the United Nations’ modus operandi, which prioritizes relations with national governments — sometimes at the expense of human lives.

In an April 17 statement, the health authority of the autonomous administration said a 53-year-old man had died in Qamishli National Hospital of COVID-19. But the fact that he had perished as a result of the global pandemic was news to the administration. A sample collected from the man was sent to Damascus on March 29. But it wasn’t until April 16 that local authorities in the northeast learned that he had tested positive for COVID-19. “Not by the World Health Organization, not by the Syrian government. We were [rather] informed of this by a [nongovernmental organization (NGO)] that operates in our region,” an official from the autonomous administration, speaking not for attribution, told Al-Monitor. “Can you imagine?” added the official.

The health authority did not mince words: “We at the Health Directorate see [the World Health Organization (WHO)] as responsible for the presence and spread of the coronavirus in our areas. It has concealed the existence of a suspected case and did not inform the autonomous administration, which is responsible for the governance of these areas.”

The coronavirus disaster has thrust into sharp relief the challenges faced by non-state entities in getting assistance from the international community in times of crisis — in this case, from the United Nation’s health arm, the WHO. The latter has avoided direct dealings with the Kurdish-led entity for fear of antagonizing the Syrian government and demands that it send all samples to Damascus for testing.

The approach mirrors its handling of the internationally isolated Republic of China or Taiwan. The WHO has been slammed for pandering to China and for failing to independently verify its claims about the disease, effectively leading to its spread, many claim. In a March 27 interview conducted via video link by Hong Kong’s RHTK, a senior WHO adviser dodged questions when pressed about Taiwan’s response to the global pandemic, claiming he could not hear them. Bruce Aylward, former assistant director-general at the outfit, then went on to say, “Well we’ve already talked about China. And when you look across all the different areas of China, they’ve actually done quite a good job.” China regards Taiwan as part of its territory.

In a March 25 interview, the WHO’s representative in Syria, Nima Saeed, sounded similarly cavalier. He told the Rojava Information Center, a research center in northeast Syria that facilitates contacts between local authorities and foreign media, that he believed the Syrian government was taking the virus “very seriously.”

According to a briefing prepared by NGO staff in northern and eastern Syria and seen by Al-Monitor, “The risk of COVID-19 in northeast Syria is very high. Of 279 recorded public health centers, only 26 are fully functioning. No district meets the emergency threshold of at least 10 beds per 10,000 people, and just one district is home to sufficient doctors, nurses and midwives to meet emergency thresholds of at least 22 health care workers per 10,000 people. Even compared to other areas of Syria, health care capacity in northeast Syria is considered particularly low.”

The risks are compounded by the presence of more than 250,000 internally displaced people and refugees as well as Islamic State fighters and their families, crammed in squalid and insalubrious prisons and camps.

On a positive note, Kurdish Red Crescent co-director Sherwan Bery said a new 120-bed hospital dedicated solely to coronavirus patients had been set up near the town of Hasakah.

The hospital “is just to focus on the COVID-19 infection cases” and keep them all in the same place instead of across different hospitals, Bery told Agence France Presse.

Meanwhile, some outside help arrived on April 11 from Iraqi Kurdistan Region President Nechirvan Barzani. He donated two testing labs along with 1,500 testing kits following appeals from his Syrian Kurdish brethren. The administration has additionally purchased two more labs, the official briefing Al-Monitor said. The official added that the WHO had finally initiated direct contact with the administration and pledged assistance. But he said the belated outreach was “well below what is anticipated and due.” According to the Syria in Context newsletter, Damascus sent seven ventilators to northeast Syria on April 9.

The total number of formally declared deaths related to COVID-19 in Syria is three, with 39 people testing positive.

Saleh Muslim, the deputy co-chair of the Democratic Unity Party, which is part of the government in northeast Syria, acknowledged that it’s misleading to blame the UN per se for the dysfunction. Rather, it’s the countries that form it that are the problem. “It should have been called ‘The United Governments” because they all promote their own agendas, not the common good,” Muslim told Al-Monitor in a telephone interview. He added, “In the Syrian case, we are talking about a dictatorship. What does the WHO want us to do, for us to go and lick the boots of [Syrian President] Bashar al-Assad for help?”

Muslim pointed to what he called a further double standard. In a March 26 statement, the WHO acknowledged that “testing for suspected COVID-19 cases in northwest Syria started two days ago after a shipment of 300 tests reached a WHO partner.” It went on, “Some 600 additional tests will reach the laboratory in Idlib today.” In other words, the WHO works in the rebel-held province of Idlib via Turkey and the Syrian government while shunning the northeast. The former al-Qaeda affiliate, Hayat Tahrir al-Sham, continues to hold sway over the province despite repeated government offensives to claw it back.

The Kurds’ sense of injustice is sharpened by the preeminent role played by their widely acclaimed men and women fighters in crushing the Islamic State’s so-called caliphate in Syria.

To make matters worse, since January the UN has been unable to directly supply medical aid to the northeast. This is because Russia and China used their veto power in December at the UN Security Council to prevent the renewal of permission for humanitarian relief to northeast Syria from neighboring Iraq. No such veto has been applied for UN aid coming through Turkey. The Russian and Chinese moves targeting the northeast are likely calculated to pressure the Syrian Kurds into abandoning their alliance with the Americans and reaching a deal with Damascus, that would be mostly on the latter's terms.

The Syrian Kurdish leadership is also being pressured by Ankara.

While Turkey allows aid to be delivered via its borders to rebel-controlled areas, it denies passage to the Kurdish-controlled territory on the grounds that they are “terrorists” with links to the outlawed Kurdistan Workers Party (PKK), the Kurdish militia that has been at war with the Turkish army since 1984.

Turkey has justified its military incursions against the US-backed Syrian Democratic Forces (SDF) in northeast Syria on these grounds. Its occupation of the towns of Ras al-Ain and Tell Abyad and the territory lying between them after a massive assault Ankara called Operation Peace Spring has left at least 70,000 people homeless, at the latest count.

The Fish Khabur border crossing with Iraqi Kurdistan is the Syrian Kurds' sole channel for incoming aid from international donors operating outside the UN system.

The SDF and its diplomatic arm, known as the Syrian Democratic Council (SDC), which operate in tandem with the autonomous administration, have not “convinced the international community that it is not linked to the PKK anymore,” observed Charles Thepaut, a visiting fellow at the Washington Institute for Near East Policy.

The Syrian Kurdish group's alleged links with the PKK did not seem to bother Ankara when it was holding peace talks with Ocalan. Muslim, a chemical engineer who was educated in Istanbul, would frequently meet senior Turkish officials in Turkey while the talks were still ongoing. They collapsed in mid-2015 along with a two and a half yearlong cease-fire with the PKK. Turkey has since expanded its operations against the PKK to include the SDF. Muslim is now on Turkey’s most-wanted list of terrorists.

“Tensions with Ankara have not been mitigated despite US and European attempts,” Thepaut told Al-Monitor in emailed comments. “In addition, the Self Administration has not cut ties with Damascus and is therefore not recognized as part of the ‘opposition’ within the UN framework. The Turkish offensive in northeast Syria in October 2019 pushed the SDF and the SDC even further to negotiate with the Syrian regime, but Damascus always tries to further isolate northeast Syria and has been blocking the humanitarian support northeast Syria could get from the UN for years.”

Editor's note: April 20, 2020. This article has been updated since its initial publication.