The United States intends to focus more on stabilizing Deir ez-Zor and Hasakah provinces as it suspends humanitarian operations in northeast Syria due to COVID-19. 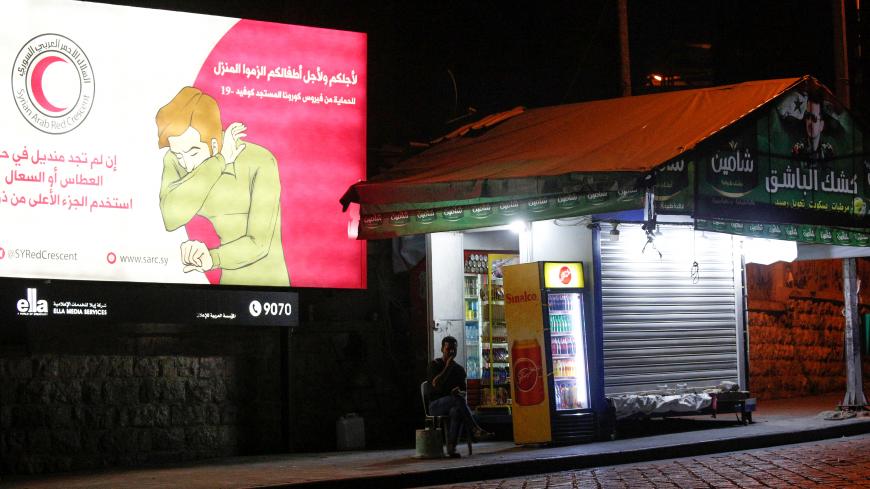 A man sits near a coronavirus awareness billboard during a lockdown to prevent the spread of COVID-19 in Damascus, Syria, April 4, 2020. - REUTERS/Omar Sanadiki

The global spread of the coronavirus and its reported trickle into Syria has forced the United States and its local partners to pause some of their humanitarian activities in the country’s northeast.

“Activities that bring people together, like seed distribution, vocational training and psychosocial support to children in education centers, are not possible right now due to COVID-19,” a State Department spokesperson told Al-Monitor.

Some programs, such as business literacy courses, have been moved online, the spokesperson added. The United States is still pressing ahead with plans to rehabilitate a water station in the town of Hajin while adhering to social distancing practices.

The spokesperson added that some of the US-funded stabilization activities in the northeast were already scheduled to end this month, specifically noting a program that supports independent media in Syria.

Those US-supported activities ending this month are expected to be replaced with “new programs that reflect the latest priorities and needs.”

Reached by Al-Monitor over WhatsApp, Abdulqader Muahed, co-chair of the Humanitarian Affairs office in the self-administration, said suspending programs was a necessary but unfortunate step.

“We are working on minimizing the negative effects and maintaining the flow and accessibility of basic assistance and services,” Muahed said. “The most vulnerable will definitely be affected.”

Muahed added that the Kurdish-led government’s US partners informed him and other officials in a recent video conference that there will be a greater focus on Syria’s eastern province of Deir ez-Zor, where Americans troops were deployed in October to guard the region’s lucrative oilfields from the Islamic States and regime-backed forces.

The State Department spokesperson confirmed that stabilizing Deir ez-Zor, as well as Hasakah province, where the US also has a presence, are continued priorities.

The first case of coronavirus was announced in Syria on March 22. As of April 5, the government of President Bashar al-Assad had reported 19 COVID-19 cases and two deaths in regime-held areas. But independent reports and accounts from doctors suggest the real number is much higher than Damascus will admit.

Northeast Syria, as with the rebel-held northwest, hasn’t yet reported any cases of the virus, but officials are bracing for a wave of infections they fear will overwhelm their war-battered health system.

“There is a shortage of everything now,” said Mehmud Bro, deputy minister for the Social Affairs and Labor office in the self-administration. “Medicines, sterile materials and masks are scarce, and the World Health Organization is moving very slowly.”

“It would be an unimaginable catastrophe in the event of a coronavirus outbreak,” he added.

Even before the threat of coronavirus, the Kurdish-majority region was dealing with a shortage of supplies and testing. Faced with a veto threat from Russia, the UN Security Council voted in January to seal the border crossing from which 40% of northeast’s medical provisions were supplied.

In a region where an estimated 1.6 million people rely on humanitarian assistance, there are just 28 intensive care unit beds, 11 ventilators and two doctors trained to use them, according to the International Rescue Committee. Of the northeast’s 16 hospitals, only one is fully functioning.

“Hospitals and medical centers are only providing primary medical care. They cannot provide holistic and comprehensive care for citizens. So imagine how it would be if people were infected with COVID-19?” said Dr. Joan Mustafa, co-chair of the Health Authority.

The only testing facility was rendered out of service during Turkey’s military operation against the US-backed Kurdish-led Syrian Defense Forces in October, which also forced aid organizations to pull out and displaced some 200,000 residents.

In the absence of COVID-19 tests, authorities are identifying possible cases with basic temperature checks, as well as using leftover test kits they would normally use for things like polio and HIV, the Rojava Information Center told Al-Monitor. They’re also using tests provided by a Swedish nongovernmental organization that use spit to determine a person’s white blood cell count and detect certain proteins.

Samples from about 20 of these suspected cases, according to Bro, were sent off to a laboratory in regime-held Damascus where results can take as long as a week. All have so far come back negative.

A big fear among Kurdish officials and aid workers are the thousands living in crowded camps and informal settlements where access to clean, running water for hand washing is limited and social distancing all-but-impossible. Highly vulnerable to an outbreak is al-Hol camp in Hasakah, where some 70,000 displaced people, including Islamic States members and their families, are packed into squalid tents.

“The immunity of the residents of the camps is weaker due to their nutrition. There is no type of vegetables or fruits in their diet at all,” Bro said. “The situation is very scary”

Kurdish officials have responded to the coronavirus threat by sealing their territory’s border with Iraqi Kurdistan and enforcing a two-week curfew they say can be extended “in case of necessity and the public interest.”

In the United States, Secretary of State Mike Pompeo recently announced $274 million in emergency funding for countries particularly vulnerable to the coronavirus, $16.8 million of which is allocated for Syria.