The Syrian opposition fears that cholera will reach its areas of control in northwestern Syria, which would be catastrophic, especially since the area’s resilience to the epidemic is low with weak capabilities of the health sector and a great number of displaced persons in camps. 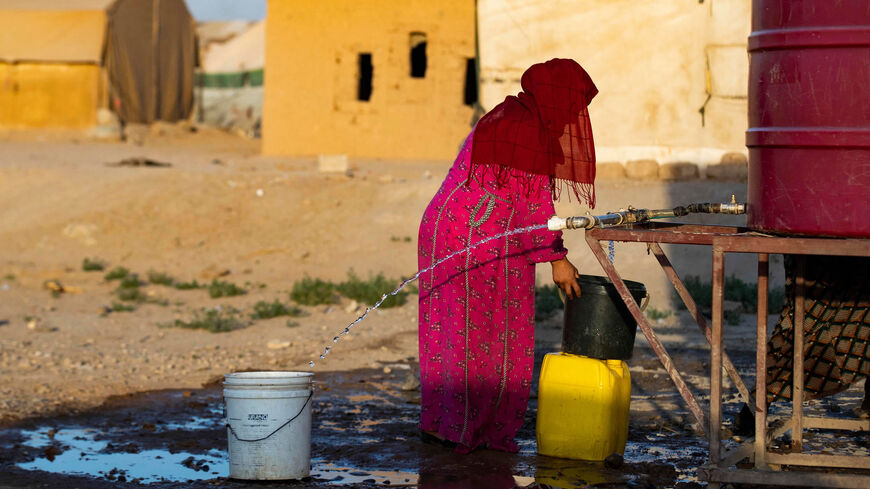 A Syrian woman fills a container with water at the Sahlah al-Banat camp in the countryside of Raqa, northern Syria, Sept. 19, 2022. - DElil Souleiman/AFP via Getty Images

ALEPPO, Syria — The number of cholera cases in Syria continues to rise daily, with the number of deaths increasing. International medical organizations fear that the dangerous epidemic will reach the opposition-controlled areas in northwest Syria, which are crowded with hundreds of camps housing the displaced. These areas also have a significantly weakened humanitarian response and scarce support for the medical sector.

Maryam al-Awad, co-chair of the Health Committee of the Deir ez-Zor Civil Council affiliated with the Kurdish-led Autonomous Administration of North and East Syria, told North Press Agency Sept. 13 that the number of deaths from cholera has increased in areas controlled by the Kurdish forces.

In another statement to North Press Agency Sept. 16, the other co-chair of the Health Committee, Muhammad al-Salem, said, “Nearly 300 cases in hospitals and health centers are suspected to be cholera. Confirmed infections reached 34 and four people died of the disease by the morning of Sept. 15.”

On Sept. 17, the media office of the Syrian government’s Ministry of Health announced that the death toll from cholera has risen to 201. The ministry’s media office said in a Facebook post that the number of confirmed cholera cases is distributed as follows: 153 in Aleppo, 21 in Hasakah, 14 in Deir ez-Zor, 10 in Latakia, two in Damascus and one in Homs.

The ministry also confirmed a total of 14 deaths, distributed as follows: 11 in Aleppo, two in Deir ez-Zor and one in Hasakah.

In a Sept. 12 statement to the United Nations Office for the Coordination of Humanitarian Affairs, Imran Riza, the UN resident coordinator and humanitarian coordinator for Syria, expressed grave concern over the ongoing cholera outbreak in Syria.

“Based on a rapid assessment conducted by health authorities and partners, the source of infection is believed to be linked to people drinking unsafe water from the Euphrates River,” she said.

The international humanitarian organization CARE, which works in Syria, warned in a Sept. 16 report that millions of Syrians are at risk of contracting cholera, noting that the disease can be rapidly fatal if not treated.

In the opposition-controlled areas in northwestern Syria, the situation appears stable so far. No confirmed cases have been recorded as of yet, and the suspected cholera cases returned negative results in the analyses.

Yet there are great concerns about the epidemic reaching those areas. Omar Misto, an official at the Ministry of Health of the Syrian opposition’s Interim Government, told Al-Monitor, “The spread of the disease to northwest Syria is expected. We hope that the epidemic does not reach us because it will be a disaster for the region.”

Misto’s concerns are based on the large spread of smuggling through crossings at the internal borders separating various areas controlled by the different conflicting parties in Syria and the ease of movement of individuals between those areas.

He said, “Since the medical sector in the opposition areas in the northwest of Syria has modest capabilities, it will be in a difficult situation if cholera spreads within such a dense population. Monitoring cases early helps prevent the outbreak of the epidemic and the spread of infections.”

He explained, “Spreading community awareness of personal hygiene, cleanliness of food and drinking sources, and knowledge of when to head to health centers to be treated, are among the most effective possible solutions to prevent the spread of the epidemic if it reaches the area.”

The concerns prompted both the Ministry of Health and the Idlib Health Directorate, both linked to the Interim Government, to raise awareness about the danger of a cholera epidemic in northwestern Syria as the area has overcrowded camps, explaining to citizens how to take care of their personal hygiene, prevent infection and identify symptoms.

Cholera is a contagious disease, caused by a bacterium called Vibrio cholerae. It lives in contaminated waters at estuaries and their confluence with seas and oceans. The bacteria usually spreads through feces of an infected person that contaminates water or food. Severe cholera cases lead to death if medical treatment is not provided.

Maram al-Sheikh, minister of health of the Interim Government, told Al-Monitor, “The ministry has not recorded any cholera cases in opposition areas.”

Imad Zahran, head of the media office of the Idlib Health Directorate, also told Al-Monitor that there have been no cases of cholera so far in northwestern Syria.

“There were some suspected cases, which turned out to be negative,” he said. “The disease can reach us overnight, but we seek to delay the infection's arrival in the region, especially with the difficult humanitarian situation as a result of overcrowding, and poor sanitation and drinking water.”

The camps for the displaced in northern Syria suffer from a great lack of services and infrastructure, namely water and sanitation. Open sewage canals are spread inside and near the camps, causing many diseases.

In addition, there is a lack of safe sources of drinking water, drought episodes and lack of water provided to the residents. This has led to a decline of interest in personal hygiene, especially among children, making the area a fertile environment for the spread of cholera.

The Syria Humanitarian Response Coordinators, an Idlib-based humanitarian nongovernmental organization assisting the displaced in northwestern Syria, warned in a Facebook post Sept. 14 of the danger of the spread of cholera in opposition areas and in the camps, since the capacity of a humanitarian response does not exceed 22% in the water and sanitation sector and 30% in the health and nutrition sector.

Muhammad Hallaj, director of the Syria Humanitarian Response Coordinators, told Al-Monitor, “590 camps in northwest Syria do not have access to clean and free drinking water. Their residents depend on buying drinking water at high prices or transporting water from unsafe sources. This reduces the amount of water they get per capita to less than 20 liters [5.3 gallons] per day. And these camps represent 43% of the total number of camps in the north of Syria.”