First COVID-19 case among residents reported in Syrian IS camp 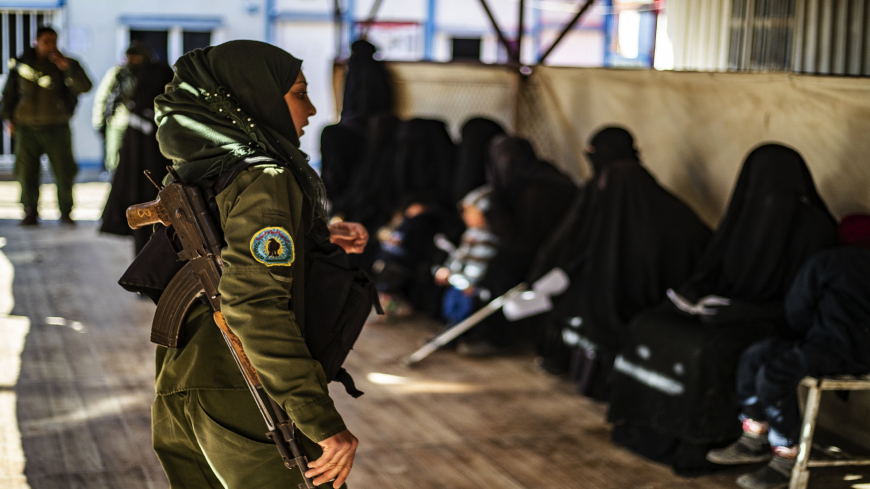 Kurdish fighters watch over women inside the Kurdish-run al-Hol camp for the displaced in the Hasakah governorate in northeastern Syria on Jan. 14, 2020, at the section reserved for Iraqis and Syrians. - Photo by DELIL SOULEIMAN/AFP via Getty Images

A resident of al-Hol camp for Islamic State (IS) families in Syria has COVID-19. This is the first confirmed case of the coronavirus in the infamous camp, and the news follows the infections of three health workers there. There are concerns from humanitarian organizations that the virus could spread rapidly in the overcrowded dwelling.

The first case in al-Hol was confirmed on Monday, according to Save the Children, one of the international humanitarian organizations that operate in the camp. The organization’s Syria head Sonia Khush said that poor living conditions in the camp will make it difficult to contain the virus.

“An outbreak of COVID-19 in al-Hol camp is going to be challenging to control considering how overcrowded the camp is and how little access families have to water, personal hygiene items, tests and protective equipment,” Khush said in a press release. “Sadly, there will be more cases.”

Al-Hol camp is home to more than 65,000 mostly women and children with varying degrees of allegiance to IS. Most residents are from Iraq and Syria, but there are also people from Europe, Asia and elsewhere. Families live in a conglomeration of tents that are close together in a desert area near the Iraqi border. There are shortages of water and hygiene materials there, making the population vulnerable to an outbreak. The United Nations is one of the organizations to warn about the COVID-19 situation before the first case was reported.

Officials from the Autonomous Administration of North and East Syria run the camp. The Kurdish-led region's main military force, the Syrian Democratic Forces, fights IS with US support and guards al-Hol.

Northeast Syria as a whole faces struggles in its fight against COVID-19. In January, Russia vetoed allowing the continuance of aid crossing from Iraq to northeast Syria. Russia is the Syrian government’s main ally, and Damascus does not fully recognize the Kurdish authorities there. Aid coming from Syrian government territory may not reach the northeast at all. Years of war with IS and Turkey have also taken a massive toll on the region’s health care system, and many are not prepared for a high number of COVID-19 cases.

The first confirmed coronavirus case among residents follows three health care workers who contracted the virus in the camp last week. The workers were Syrian and isolated at home following the detection, an autonomous administration official told Al-Monitor last week.