Humanitarians warn that poor conditions in the camp put it at great risk for an outbreak of the virus. These are the first known cases there. 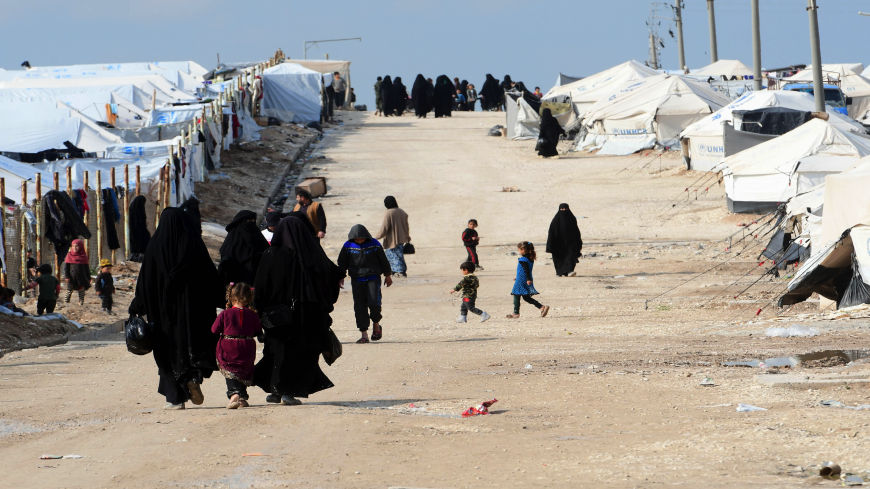 Veiled women, living in al-Hol camp, which houses relatives of Islamic State members, walk in the camp in al-Hasakah governorate in northeastern Syria on March 28, 2019. - GIUSEPPE CACACE/AFP via Getty Images

UN and local officials have confirmed COVID-19 cases in al-Hol camp for Islamic State (IS) families in northeast Syria. Humanitarian organizations warn that the notorious camp is susceptible to an outbreak of the coronavirus due to the poor conditions there.

These are the first known cases of the virus in the camp.

Al-Hol hosts more 65,000 people in a desert area of northeast Syria near the Iraqi border. The mostly women and children in the camp have varying degrees of affiliations with IS. Most of the population is from Iraq and Syria, but there are thousands of foreigners as well. The area is within the territory of the Autonomous Administration of North and East Syria. The Kurdish-led statelet’s Syrian Democratic Forces, who are backed by the United States, hold thousands of IS fighters in detention centers as well as their families in al-Hol and other camps.

The workers who tested positive are Syrian nationals working for the Kurdish Red Crescent humanitarian organization, an autonomous administration official responsible for camps told Al-Monitor. They are now isolating at home and are in “good condition" after testing positive at a hospital in the city of Hasakah, the official said.

It was not clear where exactly the workers contracted the virus as of late Thursday. Both Swanson and the administration official said that measures have been put in place to restrict entry into the camp in light of the news.

Humanitarian organizations have long warned that al-Hol is susceptible to an outbreak of COVID-19. Residents live in a packed community of tents with limited access to water and other hygiene materials.

A UN Office for the Coordination of Humanitarian Affairs report from late July on al-Hol noted that the camp’s water supply has been compromised this summer due to disruptions at a water station and reduced water levels in a dam nearby, among other factors.

The Save the Children organization warned in May that overcrowding in the camp puts people there at risk for contracting the virus.

“Severe overcrowding in the camp — and notably in the annex where families of foreign nationalities with real or perceived ties to [IS] live — would make social distancing or self-isolation practically impossible in the event of a coronavirus outbreak,” the organization said in a press release.