The Kurdish-led autonomous region's high population of displaced people and isolation following the UN closure of a border crossing is contributing to the virus' spread. 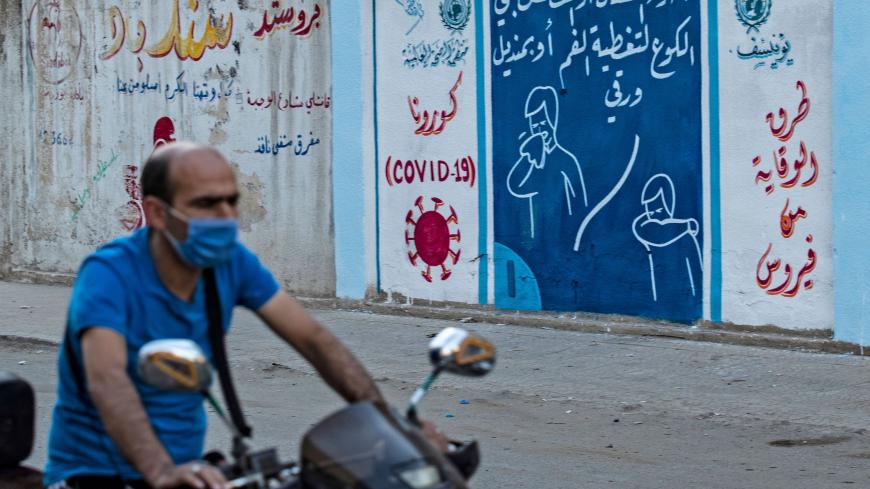 A Syrian man rides a motorbike past a mural painted as part of an awareness campaign by the United Nations International Children's Emergency Fund (UNICEF) and World Health Organization (WHO) intitative, bearing instructions on protection from COVID-19 in the Kurdish-majority city of Qamishli of Syria's northeastern Hasakeh province on Aug. 16, 2020, after a spike in infections in the area. - DELIL SOULEIMAN/AFP via Getty Images

COVID-19 cases are increasing rapidly in northeast Syria. The war-torn region is susceptible to an outbreak due to the effects of recent conflicts and the closure of an aid crossing in January.

Coronavirus cases have increased significantly in August in northeast Syria. There were 327 total cases in the area as of Aug. 21, according to a report from Qamishli-based Rojava Information Center. This included a 145-case increase that week. There were at least 300 new cases in three weeks, the center said on Aug. 24, showing that the majority of the region’s confirmed cases are recent.

The International Rescue Committee — a humanitarian non-governmental organization operating in northeast Syria — said on Thursday that COVID-19 cases have increased by 1,000% in August in a release sent to Al-Monitor. There are 425 confirmed cases in northeast Syria, a spokesperson for the organization said the same day.

In a statement sent to Al-Monitor, Doctors Without Borders said that a fifth of those infected are health workers.

Northeast Syria is governed by the Autonomous Administration of North and East Syria. The area operates independent of Damascus and is led by the Kurdish political party the Democratic Union Party. Various other Christian and Arab groups also participate in the administration, as well as in the US-backed Syrian Democratic Forces that fight the Islamic State (IS).

Conflict and political isolation make northeast Syria vulnerable to a virus outbreak. The years-long war with IS damaged healthcare infrastructure, as did the 2019 Turkish incursion into the area, which displaced hundreds of thousands. Many people remain displaced by recent conflicts, including more than 60,000 IS-affiliated women and children in the al-Hol camp. Some healthcare workers tested positive for the virus in the crowded camp with water access issues this month.

The situation is further complicated by the UN Security Council’s January closure of the Yaroubiyah crossing from Iraq into northeast Syria. Russia and China, who back the Syrian government, want aid to flow through Damascus. The Syrian government does not fully recognize the authorities in northeast Syria, making it difficult for humanitarian actors to deliver aid that way.

The International Rescue Committee, or IRC, said that the closure is significantly harming healthcare in northeast Syria.

“The IRC has already seen devastating impacts of the UN Security Council’s decision to put the Yaroubiya crossing out of use: severe disruption to services and closure of health facilities, critical shortages of medicine,” the organization said in its statement, citing a lack of personal protective equipment and intensive care unit beds as well.

Lack of adequate testing could mean there are more cases than detected.

“This is grounds for concern regarding a hidden, and far wider, spread in some of the most vulnerable parts of the country — especially amongst the civilians displaced or in humanitarian need in the northeast,” said the IRC.

Doctors Without Borders reported that the limited tests in northeast Syria show about a 50% positive rate.

“Testing is limited, but of those tests carried out, around half return a positive result,” the organization said on Thursday. “This suggests that transmission rates are high and that much more testing is needed.”

Turkey, which is in a state of conflict with Kurdish groups in northeast Syria, cut the water supply to the region this month. Water is necessary for hygiene practices that combat the spread of the virus.

Autonomous administration officials are attempting to mitigate the virus’ spread. Wearing a mask is mandatory and public gatherings are banned. The region’s schools moved online earlier this year.

Containment remains difficult. In its Aug. 21 report, the Rojava Information Center said that contact tracing stopped in the Jazira region due to “uncontrollable spread.”