Amid a spike in coronavirus cases, the region's hospitals are grappling with a major shortage of oxygen and testing supplies. 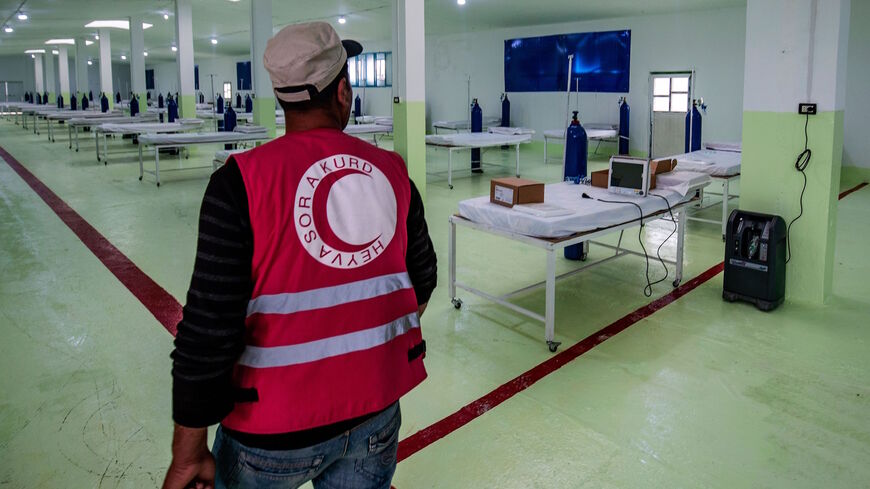 A picture taken on April 20, 2020 shows a 120-bed ward at a specialised hospital for coronavirus cases inaugurated by the Kurdish Red Crescent around 10 kilometres outside the Syrian city of Hasakeh after the first COVID-19 death was reported in the northeastern region. - DELIL SOULEIMAN/AFP via Getty Images

As COVID-19 cases surge in northeast Syria, a severe shortage of oxygen, funding and testing supplies are “putting the region’s COVID-19 response in serious jeopardy,” the International Rescue Committee (IRC) warned on Thursday.

New cases in the region "are reaching the highest levels seen to date," the UK-based charity said, even after the Autonomous Administration of North and East Syria imposed a 10-day curfew on April 13 to stave off a new wave of the virus.

Since the start of the pandemic, northeast Syria has recorded 15,546 cases, although limited testing capacity means the actual number is likely much higher. The month of April accounts for more than a third of the region’s total caseload, with 5,300 new infections confirmed in recent weeks.

In the past seven days, 46% of coronavirus tests have come back positive in the Kurdish-held enclave bordering Turkey and Iraq. IRC warned the autonomous administration’s only COVID-19 testing lab could soon close due to a shortage of RNA extraction kits.

“This would have a devastating impact on testing capacity, with health professionals no longer able to identify new cases, track trends, or gain an understanding of the true spread of the disease - just as cases are surging,” the organization said.

An economic slowdown and years of conflict, including the Turkish incursion into northeast Syria in October 2019, have weakened the region’s health infrastructure. The situation was made worse by the closure of the Al Yarubiya crossing on the Iraqi border, which had served as a vital medical supply route to northeast Syria before Russia forced the UN Security Council to shutter it in January 2020.

IRC says treatment facilities in the region are overstretched, and a lack of funding forced seven to close in March. At least one hospital in the eastern province of Deir-ez-Zor is running out of medicine and at risk of closing.

“Currently, 83% of patients who receive invasive ventilation in the region are not surviving and we fear that things will only get worse,” said Misty Buswell, Policy and Advocacy Director for the IRC in the Middle East and North Africa.

“The health system is struggling to cope, and the situation is deteriorating extremely rapidly,” Buswell said.

The camps housing the families of suspected Islamic State members are particularly vulnerable to the latest virus surge, Save the Children warned this month. The UK-based charity called on foreign governments to “carry out their duty” and repatriate their nationals languishing in al-Hol and other detention camps.