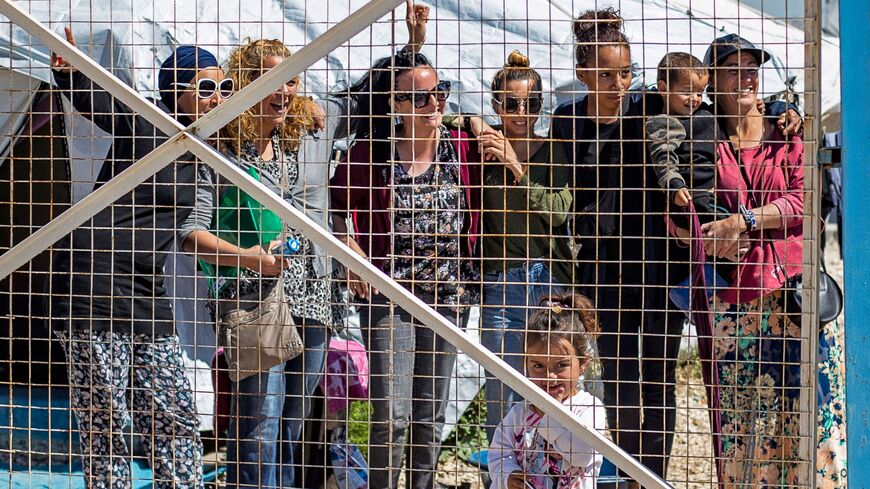 A group of women, reportedly the wives of suspected Islamic State (IS) group fighters, pose March 28, 2021, for a picture at the Roj camp where relatives of suspected IS members are held, in the countryside near al-Malikiyah (Derik) in Syria's northeastern Hasakah province. The women have abandoned the black all-covering face veils and niqabs they wore previously for everyday clothes. - DELIL SOULEIMAN/AFP via Getty Images

A surge of coronavirus cases could worsen an already dire humanitarian situation in northeast Syria’s displacement camps, Save the Children said Thursday.

The charity said 46 COVID-19 cases have been reported this month across three camps for displaced people in the Kurdish-controlled part of Syria, which on Tuesday announced a 10-day lockdown aimed at staving off a new wave of the virus.

Since the beginning of April, 28 coronavirus cases have been reported in Roj camp, 15 in Areesha camp and three in al-Hol camp. Because of the lack of regular testing, Save the Children says the true number of cases is likely much higher. Most of the new cases are among mothers, the charity said.

“These new figures are incredibly concerning,” Save the Children’s Syria Response Director Sonia Khush said in a statement. “If this upsurge continues, it will only be a matter of time before hospitals and isolation facilities — which already have very limited capacity — are overwhelmed.”

More than 12,700 cases and at least 432 deaths from the virus have been reported in northeast Syria since its initial outbreak in April 2020. In the past week alone, the region has reported more than 1,400 cases and 53 deaths.

Save the Children says the humanitarian situation has worsened since the closure of the Al Yarubiya crossing on the Iraqi border, which had served as a vital supply route to northeast Syria before Russia forced the UN Security Council to close it in January 2020. Moscow is also threatening to eliminate a cross-border aid operation into northwestern Syria’s Idlib province when its mandate is up for renewal this summer

“There is no justification for preventing life-saving supplies from reaching people in need — particularly during a global pandemic,” Khush said.

Save The Children also called on countries to “carry out their duty” to repatriate their nationals, including children, held in the Kurdish-run camps. Many governments have been reluctant to prosecute or rehabilitate the tens of thousands of foreigners linked to the Islamic State and their families, despite the US-allied Kurdish forces warning they are ill-equipped to handle them.