National-religious activists and settlers are abandoning Prime Minister Naftali Bennett because of his partnering with centrist and left-wing parties. 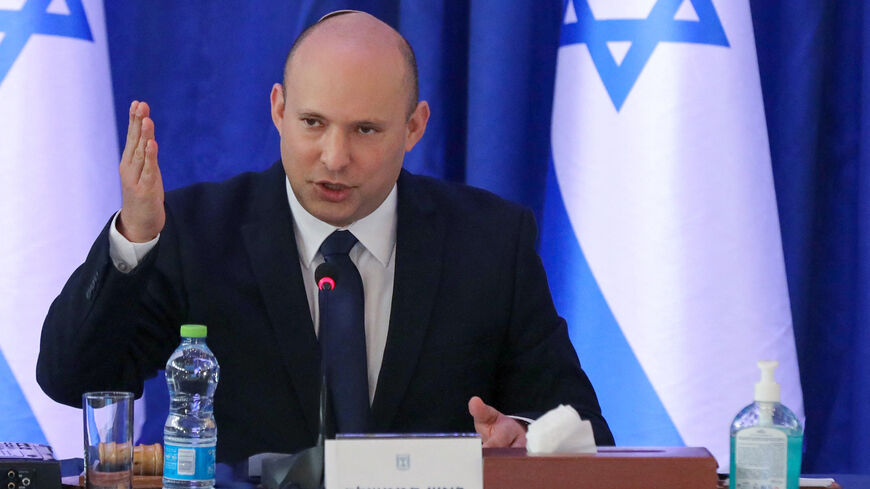 In the weeks leading up to the formation of Israel’s new government, Naftali Bennett would say that as soon as he settled into Prime Minister Benjamin Netanyahu’s old office, the public would get used to him. Then, he said, his position in the polls would improve. He said the same thing just before his Aug. 27 official visit to the United States. In conversations with other politicians, he expressed his firm belief that something as simple as a photo of him in the White House alongside President Joe Biden would boost his public standing.

This week, Bennett will mark three months since being sworn as prime minister, and the rise in the polls hasn’t happened yet. The problem isn’t just that the Yamina party, which he leads, remains stuck at six seats in the polls (one seat less than it won in the March 2021 election). It also lost a good part of its original base on the right. These supporters abandoned Bennett for breaking his original promises. Some of them have since returned to the Likud and Netanyahu.

Pundits who study the polls explain that the only reason Bennett has been able to maintain his strength is because he replaced many of his voters on the right with another pool of supporters.

Lying behind the numbers is one of the biggest stories in Israeli politics of the last generation. The right has undergone a historic rift since the election, as a result of Bennett’s decision to partner with the center-left.

Bennett is an avowedly right-wing prime minister, who even wears a yarmulke and used to position himself to the right of the Likud, claiming that Netanyahu showed weakness toward Hamas. But when he chose to join forces with the parties on the left, a significant number of voters abandoned him.

A prime minister without his own base of support is an unprecedented phenomenon in Israeli politics, at least until now. The center-left may feel empathy for Bennett because of the important role he played in removing Netanyahu from power, but it does not believe that he represents them, nor will it vote for him in the future. Meanwhile, the right sees him as a political con man, who preferred his personal ambitions over everything else when the moment of truth finally arrived.

There are plenty of comments along these lines throughout social media, where clips of Bennett’s promises to voters are constantly being posted. As it turns out, the archives are the prime minister’s greatest nemesis. In March alone, he repeatedly swore that he would never sit in a government with Foreign Minister Yair Lapid, the head of Yesh Atid party, nor join forces with the parties on the left or with Muslim Ra’am, a party that some in the right claim is a backer of terrorism. Other clips show him promising to act aggressively in Gaza, or mocking the Qatari money that the Netanyahu government allowed into the Gaza Strip to prop up the Hamas regime.

Antagonism toward Bennett and his deputy, Interior Minister Ayelet Shaked, isn’t limited to social media either. The tensions were visible in a toast to the new year held by the Yamina party last week. A video clip of the event showed Shaked beginning to speak when she was heckled by someone disappointed by the party: Although she spent several minutes trying to calm the man down, in the end, he was forcibly removed. The video was then shared across social media and the right’s WhatsApp groups.

Until just a few months ago, Shaked was considered the “princess of the right.” She was even mentioned as a potential candidate for prime minister. But Shaked has since lost her stature. She was once the eloquent spokesperson for everything the right dreamed of implementing: legal conservatism, aggressive security policies, and a national agenda with nationalist elements. Today, she is considered to be little more than an opportunistic politician.

Even Bennett’s friendly meeting with the heads of the Yesha Council, the settlement’s umbrella organization, shines a spotlight on the right wing's rift. Bennett’s office released a photo of the prime minister sitting around a huge table, surrounded by about ten of the Yesha Council’s representatives. The fact that it was such a small group compared to past meetings underscores the divisions within the Yesha Council itself since the formation of the new government.

Furthermore, the security, diplomatic, and political situation have not allowed Bennett to rehabilitate his standing on the right. As the situation in Gaza heats up, and rockets are fired at Israeli settlements in the south, Bennett has been coming under sharp attack from Sderot mayor Alon Davidi, who was elected to the Knesset as a member of Yamina but resigned when the party joined forces with the left. “I think Bennett made a serious mistake," he said in an interview with the media. "I do not understand how he had the guts to tell us one thing and do another. It is not political history, a politician who does things quite the opposite is not related to politics…Bennett made an exit move unrelated to values, and marked the goal of being prime minister in advance, and along the way shattered many values ​​and damaged the trust of very many people. On a personal level, there is no person who will disappoint me and that I felt cheated on more than Naftali Bennett. “

The fact that a highly regarded mayor like Davidi, once a close Bennett ally, spoke out so sharply against him only highlights how the formation of the new government is still sending shock waves across the right.

At the moment, with no new elections on the horizon, it is hard to gauge the full effect on the right. The general assessment is that Bennett will only grow weaker if the Gaza front heats up and the center-left parties in government continue to push to revive the peace process with the Palestinians.

In fact, Lapid did just that Sunday by presenting his plan to rebuild Gaza and strengthen the Palestinian Authority. At the same time, the rightwing parties that are not part of the current government are expected to grow in strength, along with Netanyahu. But if Bennett is free from any electoral constraints imposed by the right, it may afford him an opportunity to build a new base among the political center.