Prime Minister Naftali Bennett and Foreign Minister Yair Lapid both welcomed calls by some 300 Iraqis in favor of normalizing ties between Jerusalem and Baghdad. 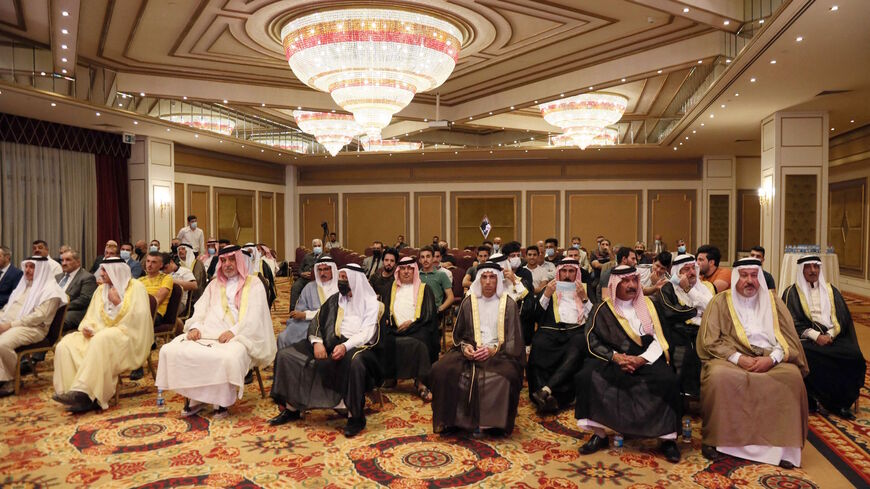 Iraqis attend the conference of peace and reclamation organised by US think-tank Center for Peace Communications (CPC) in Erbil, the capital of northern Iraq's Kurdistan autonomous region, on Sept. 24, 2021. - SAFIN HAMED/AFP via Getty Images

Israeli politicians this weekend hailed calls by an Iraqi group for normalizing ties between the two countries and for Iraq to join the Abraham Accords. In a rare move, more than 300 Iraqis, including tribal and religious leaders, participated Sept. 24 at a conference in Erbil, in the autonomous Iraqi Kurdistan region.

Sahar Karim al-Ta’i, a senior official in Iraq’s Ministry of Culture. told the gathering, "As you know, Israel today is a powerful country. It constitutes an inseparable part of the United Nations and the world. Iraq must not neglect this fact.’’

"We demand our integration into the Abraham Accords," she said, referring to the measure signed last year between Israel, the Emirates, Bahrain, Morocco and Sudan. "Just as these agreements provide for diplomatic relations between the signatories and Israel, we also want normal relations with Israel. No force, local or foreign, has the right to prevent this call."

Karim al-Ta’i also addressed the issue of Israeli Jews of Iraqi origins. "For the sake of peace in the region, it has become imperative to recognize Israel as a friendly country, especially since half a million Israelis are of Iraqi origins. Their eyes are still turned towards Iraq. … They are still waiting for the moment when Israel is recognized as their country and the country of their compatriots.’’ She then noted that Iraq should formulate new policies to deal with the lost property of the Jews who were forced to flee Iraq after the state of Israel was established, and to revive religious pilgrimage.

Sheikh Rissan al-Halboussi of the Anbar province, who also participated at the conference, said that "Normalization with Israel is now a necessity," citing the examples of Morocco and the Emirates signing normalization accords with Israel.

“We demand full diplomatic relations with the State of Israel…and a new policy of normalization based on people-to-people relations with the citizens of that country.”  Sheikh Wisam al-Hardan, also from Anbar, told the conference, which was organized by the Center for Peace Communications, a US think tank .

Clearly, these words struck a chord in Israel. Prime Minister Naftali Bennett tweeted after the conference, “Hundreds of Iraqi public figures, Sunnis and Shiites, gathered yesterday to call for peace with Israel. This is a call that comes from below and not from above, from the people and not from the government, and the recognition of the historical injustice done to the Jews of Iraq is especially important. The State of Israel extends its hand back in peace.”

"The event in Iraq is a source of hope and optimism," Foreign Minister Yair Lapid stated after the conference. "Israel is always searching for ways to widen the circle of peace, and we are working with friends across the world to make that happen. Normalization benefits the entire region and helps us move away from the extremism and chaos offered by negative actors towards stability, prosperity, moderation and cooperation. The Jewish people share a deep historical connection to Iraq. So to the Iraqi people we say today – we have far more that unites us than divides us and far more to gain from peace than from unnecessary conflict."

Yet the federal government rejected the participants' call. The office of Iraqi Prime Minister Mustafa al-Kadhimi put out a statement Saturday emphasizing Baghdad's "categorical rejection" of "illegal meetings held by some tribal figures." The Kurdish authorities in Erbil condemned the conference as well, as did major Iraqi political figures and parties.

Shortly after the conference, Iraqi authorities put out arrest warrants for three of the participants, including Karim al-Ta'i.

Tsionit Fattal Kuperwasser, a leading researcher on Iraq and the Iraqi Jewish community, welcomed the statements and expressed hopes for establishing strong ties between the two countries. Speaking with Al-Monitor she said, "I congratulate every voice that expresses willingness for normalization, for relations with Israel and for strengthening the ties between Iraq and Jews from Iraq across the world, including in Israel."

The conference "brings up to the surface voices of non-negligible parts within the Iraqi public who say yes to peace and yes to the enlargement of the Abraham Accords," said Fattal Kuperwasser, author of The Pictures on the Wall and an activist for building bridges between Jews and Iraqis. "I hope that the Iraqi government will not hurt these people who seek to advance peace.’’