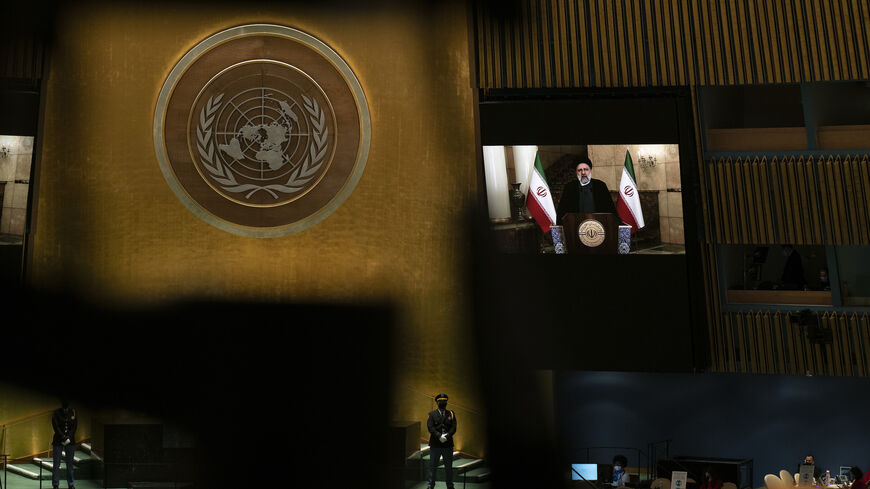 President Ebrahim Raisi has used the occasion of his first United Nations General Assembly speech to criticize US foreign policy and sanctions against Iran.

Participating via video, Raisi said there were “two fateful images” from last year: One was the Jan. 6 riot at the US Capitol; the other was that of a young Afghan boy falling from a US plane that had just taken off during the departure of US troops from the country after 20 years. The message of the two events, according to Raisi, is that “the imperial system of America is not trustworthy, whether domestically or abroad.”

In the Middle East specifically, Raisi said “imposing a Western identity has failed.” The United States is “not leaving Iraq and Afghanistan … they are being kicked out,” he said, adding it is the US taxpayers — and the people of Palestine, Syria, Afghanistan and Yemen — who have paid for US policies in the region.

Raisi said “America First” and “America is back” are no longer relevant themes, and if US policymakers had wisdom they’d see that “a people’s perseverance is more powerful than the strength of the superpower.”

According to Raisi, instead of “changing how it lived with the world, the United States changed how it went to war in the world.” "Sanctions are the new way of war for America,” Raisi stated. He said sanctions against Iran did not start with Iran’s nuclear program or with the 1979 Islamic Revolution; rather, it started when Iran nationalized its oil in 1951. Raisi also said sanctions on medicine during a pandemic such as COVID-19 is “a crime against humanity.” While medicine is not technically sanctioned, Iran has difficulty paying for medicine due to banking sanctions and Western companies often opt out of having to navigate US sanctions laws.

Raisi spoke as well about the nuclear deal known as the Joint Comprehensive Plan of Action, which the United States exited in 2018 and as a result increased sanctions on Iran. He said, “America incorrectly thought we would become desperate, but our perseverance has yielded results and it will always yield results." Iran said recently that negotiations in Vienna to bring the United States back into the deal and bring Iran back into full compliance would resume in a few weeks. But Raisi added, “We do not trust the promises of America.”

The top fold of the Iran newspaper, which is now run by the Raisi administration, covered Raisi’s speech with the headline “A new era has begun.” The reference is likely not just a new era to world relations but also in comparison to the previous administration, which was keen on negotiating with the United States and the West in order to solve Iran’s economic woes. Raisi and his administration have not been in a rush to resume the nuclear talks. Raisi’s speech at the UN suggests that even once they do, they will pursue more of a hard line.