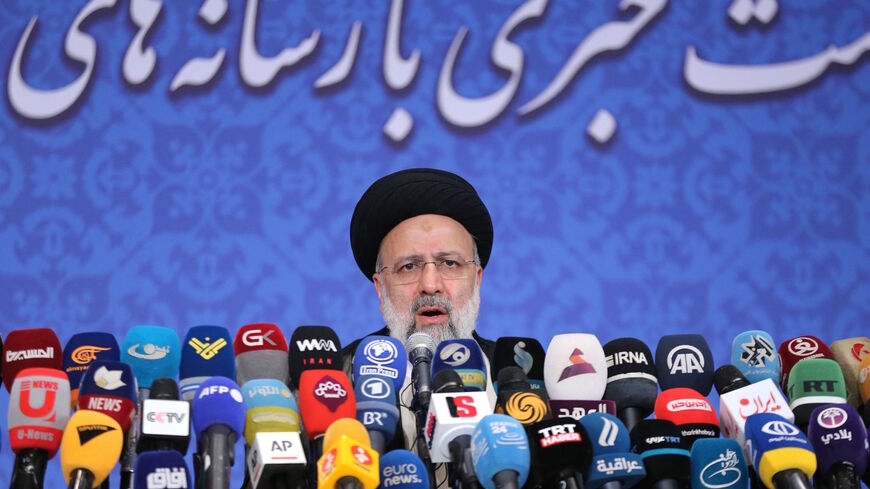 Sitting before dozens of microphones in his first press conference since the election Friday, Iran's President-elect Ebrahim Raisi fielded questions from domestic and international media. According to his responses, he intends to continue many of Hassan Rouhani’s foreign policies.

In regard to the 2015 Iranian nuclear deal known formally as the Joint Comprehensive Plan of Action (JCPOA), Raisi said the current negotiating team would stay in place and are issuing reports to his foreign policy team. It is widely believed at this point that the current nuclear talks taking place in Vienna to have the United States reenter the nuclear deal and Iran return to full compliance with the terms of the JCPOA are being supervised by the office of Supreme Leader Ayatollah Ali Khamenei, who has the final say in all foreign policy matters.

Raisi also said that after the US exit from the deal, the Europeans also did not abide by the agreement. The United States must remove all sanctions, he said — even those applied by the Trump administration, which exited the 2015 JCPOA and reapplied international sanctions. He reiterated a position stated by Khamenei that once all of the steps the United States takes to reenter are verified, Iran will then return to full compliance of the JCPOA.

Saeed Khatibzadeh, spokesman for Iran’s Foreign Ministry, said negotiations are likely going to end soon, and the next round of talks will likely be the last. Negotiators held their most recent talks on June 19. The negotiators all left Vienna for their capitals in order to make a final decision. Iranian negotiators want assurances that the United States will not exit the deal again. However, given that the JCPOA is not a treaty approved by Congress and requires presidential waiving of sanctions, it appears difficult to give such assurances.

When asked if he would be willing to meet with President Joe Biden, Raisi simply said, “No.” Some individuals compared Raisi’s curt “no” with Rouhani’s comments when he first became president in 2013 vowing that he would meet with anyone in order to help lift sanctions. A meeting between Rouhani and then-President Barack Obama was thwarted by Khamenei. Rouhani and Obama did speak by phone, however. Obama and Foreign Minister Mohammad Javad Zarif met at the United Nations behind closed doors.

When asked whether negotiations would take place with the United States on regional issues and missiles, Raisi said, “Regional and missiles issues are non-negotiable.” He added, “They have not abided by the issues, which they negotiated on. How can they negotiate on new issues?”

Raisi is set to take the presidency at a time when sanctions come off of Iran. He will have a friendly parliament that will likely support all of his ministers and his initiatives. Given his 40 years in the judiciary and having left the top post there, he will have allies in that position. The supreme leader and members of the intelligence community have also shown their support. He will likely have the easiest honeymoon period of any president in 25 years.