This week's talks in Vienna have brought officials closer to resolving the nuclear deal crisis, though Iran still insists on full sanctions removal. 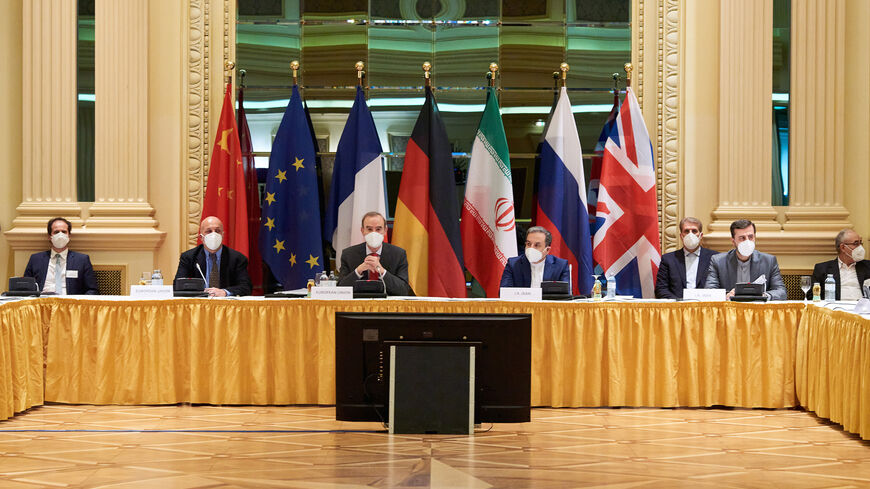 Representatives of the European Union (L) and Iran (R) attend the Iran nuclear talks at the Grand Hotel on April 6, 2021 in Vienna. - EU delegation in Vienna via Getty Images

Despite reports of progress that came this week out of Iran nuclear deal talks in Vienna, Iran’s Press TV says a source tells it that Tehran is rejecting "segmentation” of US sanctions. This appears to mean that Iran, before it moves to again comply with the terms of the Joint Comprehensive Plan of Action (JCPOA), wants a complete removal of the sanctions President Donald Trump reapplied when he exited the deal in 2018.

Press TV issued its report April 7, after top officials from Iran and the remaining countries in the 2015 nuclear deal (Russia, China, Germany, France and Britain) gathered in Austria this week to discuss US reentry into the JCPOA.

Many news organizations reported that members of the Joint Commission agreed to form two working groups to try to find a way to remove US sanctions and see a return by Iran to full compliance. President Joe Biden has expressed a desire for the United States to reenter the JCPOA once Iran rolls backs its violations of the deal's terms.

The source told Press TV that Iran rejected the idea that there would a be short-term verification process to determine that sanctions have been removed. The source appeared to be saying that Iran would reject any “step for step” process in which Iran takes steps into full compliance and the United States reciprocates by removing groups of sanctions.

Iran’s position, as stipulated by Supreme Leader Ayatollah Ali Khamenei, is that the United States must remove all sanctions that were reapplied, that the removal must be verified and that Iran would then return to full compliance. After the US exit from the deal, Iran took a series of public steps away from the terms of the JCPOA.

Iranian President Hassan Rouhani also spoke April 7 at a Cabinet meeting reiterating Iran’s position, saying that those involved in the nuclear agreement have all reached the conclusion that “there is no better path than the complete implementation of JCPOA.” Rouhani added that despite all of the pressures Iran has faced, his administration has shown that Trump’s “maximum pressure” campaign has failed.

One of the suggestions that have circulated in US media is that the United States would offer partial sanctions relief in exchange for Iran not continuing to expand its nuclear program. In a last-minute agreement with the International Atomic Energy Agency, Tehran delayed a decision that would reduce observations of Iranian nuclear sites. However, Iran is determined to move ahead in other areas of its nuclear program.

Behrouz Kamalvandi, spokesman for Atomic Energy Organization of Iran, said April 7 that Iran is moving toward having 120 kilograms of 20% enriched uranium. He said Iran is halfway there and would reach the goal in eight months. The enrichment decision is part of the Iranian parliament’s Strategic Action for the Removal of Sanctions bill. Under the JCPOA, Iran is limited to enrichment below 5% for a specific period of time and to using lower-grade centrifuges. Iran, however, has announced it would continue work on more advanced centrifuges.

Ali Akbar Salehi, who was a part of Tehran's nuclear negotiation team and heads the Atomic Energy Organization, reassured Iranian critics of the nuclear deal that the JCPOA “did not suspend Iran’s nuclear industry.” He also said he agrees with Deputy Foreign Minister Abbas Araghchi, who attended the talks in Vienna, that “they were positive.”