Rouhani calls on US to compensate for Trump's 'economic war'

President Hassan Rouhani called on the current US administration to undo the harm caused by the previous one, which he said was run by a "crazy person." 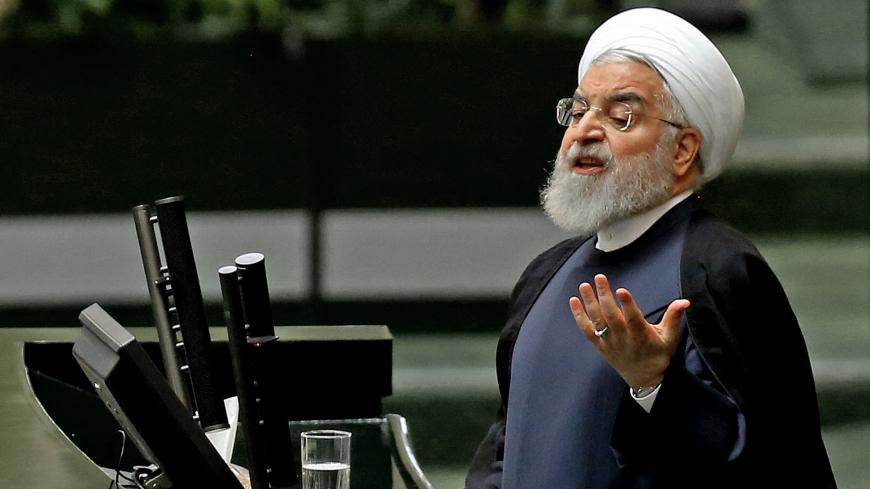 Iran's President Hassan Rouhani addresses the parliament in the capital Tehran on Sept. 3, 2019.

President Hassan Rouhani made some fresh comments today as the public battle between the United States and Iran heats up over which country will take the first step in salvaging the nuclear deal.

Participating in a virtual conference via video, Rouhani admitted that the people of Iran have experienced “difficulty, pain and problems” since President Donald Trump exited the nuclear deal in 2018 and reapplied US sanctions. “We did not think that in America a crazy person would be elected and start a historically incomparable war against the nation,” said Rouhani, referring to the crippling economic sanctions as an “economic war.”

The new US administration has not yet waived these sanctions, calling on Iran to first return to full compliance with the terms of the deal. Rouhani said, “The people of the US and the current administration have understood that [Trump] was in the wrong.”

Talking about Iran’s resilience in the face of the “maximum pressure” policy of the Trump administration, Rouhani said, “The enemy brought all of its pressure and suspended our sale of oil. We managed the country without oil sales and wrote a budget not tied to oil.”

Rouhani added, “We are not asking the Americans to do something illegal due to our insistence; what we want is for them to implement an international pact. We are hopeful they will return to the law.” The nuclear accord was endorsed by UN Security Council Resolution 2231.

Despite public statements by Iranian officials about the need to return to the deal, some Iranian officials and media outlets are beginning to sense that progress is not imminent. Mahmoud Vaezi, Rouhani’s chief of staff, said that the agreement “by itself has no value and it only has value when we see benefits to it.” An article in the hard-line Javan newspaper headlined “Is Biden opportunity or threat” argued that President Joe Biden’s differences with the Trump administration were a campaign performance and that even members of the Rouhani administration are learning that “Biden is following Trump’s actions.”

The next step in the escalation appears to be Iran’s withdrawal from the nuclear non-proliferation treaty's Additional Protocols, which Iran signed in 2003 and give the International Atomic Energy Agency broad access to Iran's nuclear facilities. An Iranian bill called the Strategic Action to Remove Sanctions calls for Iran to suspend its “voluntary” participation in the additional protocols.

Tehran’s representative to the IAEA, Kazem Gharibabadi, has notified the United Nations that Iran will suspend compliance with the Additional Protocols on Feb. 23. It is not yet clear what doing so will mean.