Raisi’s hard-line approach may further sharpen disagreements between Ankara and Tehran over Syria and Iraq, but Ankara also sees new opportunities under the new Iranian leadership. 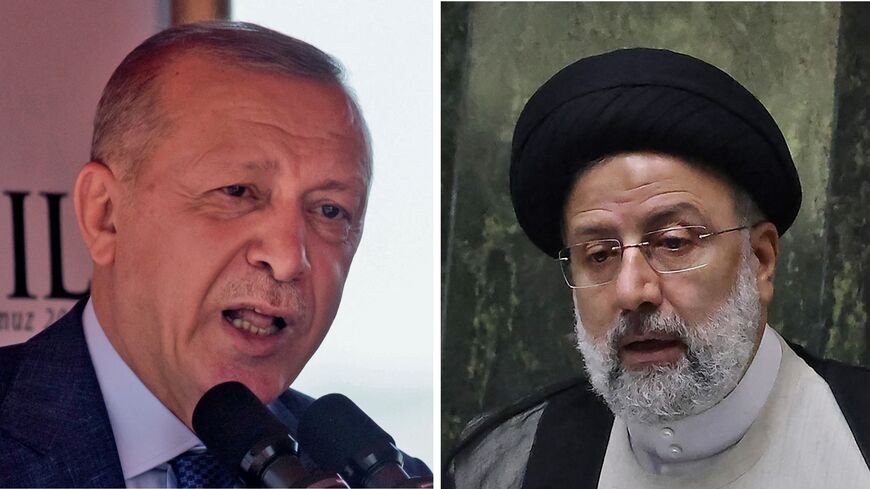 How will Turkish President Recep Tayyip Erdogan (L) and new Iranian President Ebrahim Raisi get along? Here, Erdogan speaks following a parade in the northern part of Cyprus' divided capital, Nicosia, in the self-declared Turkish Republic of Northern Cyprus, July 20, 2021, while Raisi speaks during his swearing-in ceremony at the Iranian parliament in the capital, Tehran, Aug. 5, 2021. - IAKOVOS HATZISTAVROU (L) / ATTA KENARE (R) / AFP via Getty Images

Turkey-Iran relations are laden with risk but also new opportunities under the administration of Iran’s newly inaugurated president, Ebrahim Raisi — a hard-liner with close ties with Iranian Supreme Leader Ayatollah Ali Khamenei and the country's establishment.

In Iran, the supreme leader and Supreme National Security Council has always been influential in the country’s foreign and security policies. Thus, the presidential transition, which has seen the moderate Hassan Rouhani succeeded by the conservative Raisi, might not bring radical changes in foreign policy. Tehran’s ties with Ankara will maintain their importance as long as Western-led isolation policy and sanctions against Iran remain intact — a situation that helps keep Ankara-Tehran ties at a manageable level, despite some ongoing disagreements.

Although Raisi has yet made a public comment vis-a-vis Tehran’s relations with Ankara, Iranian establishment’s preferences will likely play a major role in shaping the foreign policy of Raisi, who has limited experience in the field. Khamenei's praises of the new president; the pledge of Mohammad Hossein Bagheri, the chief of staff of the Iranian armed forces, to cooperate with the new Iranian administration; and Raisi’s promise to form a “revolutionary government” indicate that the new president already embraces the Iranian hard-line establishment choices.

Experts say they believe the Iranian civilian bureaucracy advocating the normalization of Tehran’s ties with the West will likely lose its influence under Raisi’s rule. Although the supreme leader has always had the final word over the country’s foreign and security policies, Rouhani was able to pursue a dual-track diplomacy balancing the role of the hard-liners. Rouhani’s “strategic patience” policy aiming to counter the US "maximum pressure" policy was already abandoned before Raisi’s election. In other words, the Khamenei-led Iranian establishment opened the way for Raisi’s election victory by openly endorsing him in a bid to eliminate the dichotomy between the supreme leader and the presidency.

Iranian retaliation attacks against Israel in the Persian Gulf are marking the nature of the new era between Tehran and the Western capitals. Khamenei's criticism of Rouhani’s conduct during the nuclear deal talks and Iran's uncompromising stance on Iran’s ballistic missile program and regional policy in Vienna talks are defining a road map for the Raisi administration.

Having embraced this road map, Raisi pledged, at an Aug. 3 ceremony in Tehran, to “lift cruel sanctions.”

Yet Tehran might still resort to “honorable flexibility” in its negotiations with the West over the nuclear deal. In the end, the negotiations in Vienna have begun with the blessing of Khamenei. Iran still seems to be hoping to get results from these talks but without making concessions.

A possible rupture in the Vienna process, however, could serve as a catalyst for the advancement of Tehran-Ankara ties, albeit one likely limited to cooperation in the economic realm. Furthermore, the increasing sway of the Islamic Revolutionary Guard Corps (IRGC) over the country’s policy choices may escalate disagreements between Ankara and Tehran over Syria and Iraq. The IRGC has already been playing a major role in Tehran’s Syria and Iraq policy.

Iran-Turkey ties, which have long been shaped under the principle of “peaceful competition,” can be explained in three categories that have always had their ups and downs.

The first category is comprised of major priorities such as maintaining the stability and security along the border the countries have shared since 1639. Maintaining trade and cultural ties between the two countries fall under this category as well. Perpetual communication between governmental institutions and good neighborly relations have been a principal motto of the ties as part of these principles. Turkey has always refused to impose sanctions against Iran, with an exception in 2019 under US President Donald Trump’s administration.

Mutual insecurity is the second category that has been shaping Ankara-Tehran ties. Iran sees an early-warning radar station as part of NATO’s missile defense system in northeast Turkey and Incirlik air base near the Syrian border as threats to its national security. Turkey’s close ties with Israel until 2010 had also been a source of insecurity between the two capitals.

Disagreements and rivalry led by political decisions fall under the third category. A pursuit of a joint strategy against the Kurdistan Workers Party (PKK) — an armed outfit that has fought Ankara since 1984 and is designated as a terrorist group by much of the international community — tops the list of the discords on this front. Turkey has long accused Tehran of playing a double game on the PKK. In addition, until recently, Ankara has been wary of Iranian efforts to export the Islamist regime to Turkey. Similarly, Tehran criticized Ankara for contributing to the anti-regime movement in Iran through Iranians of Azeri origin.

The southern Caucasus stands out as another rivalry realm, particularly following the 2020 clashes between the Azeri and Armenian armies. Iran tends to favor Armenia against Israeli- and Turkish-backed Azeri forces. Turkish-Azeri plans to set up a corridor connecting Azerbaijan to Turkey through the Azeri exclave of Nakhichevan also irks the Iranian side, as such a corridor would bypass Iran as a major trade route between Turkey and Azerbaijan.

The Iranian-Turkey rivalry over Iraq has particularly escalated after the 2003 invasion. While Iran has expanded its foothold in the country through Shiite groups, Turkey has tried to counter Iranian influence through Sunni Arabs and Turkmens.

A struggle for influence in the Middle East that gained momentum after the Arab Spring, with escalating rivalry in Syria, Lebanon and Yemen,is among other contentious fields between the two capitals.

Yet the traditional principles that lie at the foundation of modern-day Iran-Turkey ties prevent these rivalries from turning into direct confrontations. For example, in December, Turkish President Recep Tayyip Erdogan drew the ire of the Iranian establishment by citing a poem offending Tehran at a speech in Baku during his visit to Azerbaijan in December, but the tension subsided after Khamenei stepped in.

Afghanistan will likely be the first stress test before the ties between the two capitals now that Raisi has taken office. Along with Russia and China, Iran is preparing to cooperate with the Taliban, while Turkey is planning to assume the security of Kabul's international airport to support the Afghan government forces. Moreover, the flow of Afghan asylum seekers reaching Turkey through Iran has exacerbated already high anti-refugee sentiment in Turkey. Ankara has asked Tehran to step up the efforts to stop the refugee flow.

The election victory of the Iranian hard-liners who consider Turkey’s regional ambitions a threat to Tehran might sharpen the disagreements between the countries over Syria and Iraq.

Yet the possibility of escalation also forces both sides to be more cautious. Ankara, for its part, showed its willingness to make a good start with a few gestures. Erdogan was one of the first leaders to congratulate Raisi on his election victory, the number of critical articles in the Turkish pro government media has significantly declined and the Turkish media has mostly ignored the antigovernment protests over water shortages in Iran’s predominantly Arab Khuzestan region.

According to a recent commentary by Turkey’s official Anadolu News Agency, although mutual ties will likely be tested on Syria and Iraq under the Raisi administration, “Turkey has no reason to mourn the end of the Rouhani government,” as Syria and Iraq policies already were controlled by the Iranian “establishment.” Although the congruence between the new Iranian government and the establishment will not necessarily make Turkey’s job easier, it will make this more “predictable.”

“In the new era, Iran's relations with Turkey will largely depend on the policies that Raisi will follow against the United States,” another commentary said, echoing more optimism. Turkey's “facilitating role” in Iran's foreign trade” and other cooperation areas, including tourism, would further develop in the post-coronavirus period, it added.

Arif Keskin, a Turkish commentator and an expert on Iran, said he believes Iran-Turkey relations may be further strained over Iraq and Syria, as the IRGC's Quds Force will likely gain more influence under Raisi and ideological appointees will likely take the lead in the Iranian Foreign Ministry. Keskin said Raisi’s administration will be following the voice of the Iranian establishment.

Keskin told Al-Monitor that escalating tensions between Iran and the West will force Tehran to sustain good relations with its neighbors to alleviate the impact of sanctions and isolation.

He said Turkey, in turn, sees an opportunity in a possible faceoff between Iran and the West, and is softening its criticism toward Tehran and keeping its cautious tone.

Finally, countries such as Turkey will likely bear personal significance for Raisi as he will be unlikely to receive a warm welcome from the international community, particularly Western leaders, because of his leading role in the mass execution of thousands of political prisoners in 1988.