Iran and Turkey are increasingly rivals in the Caucasus and in Iraq. 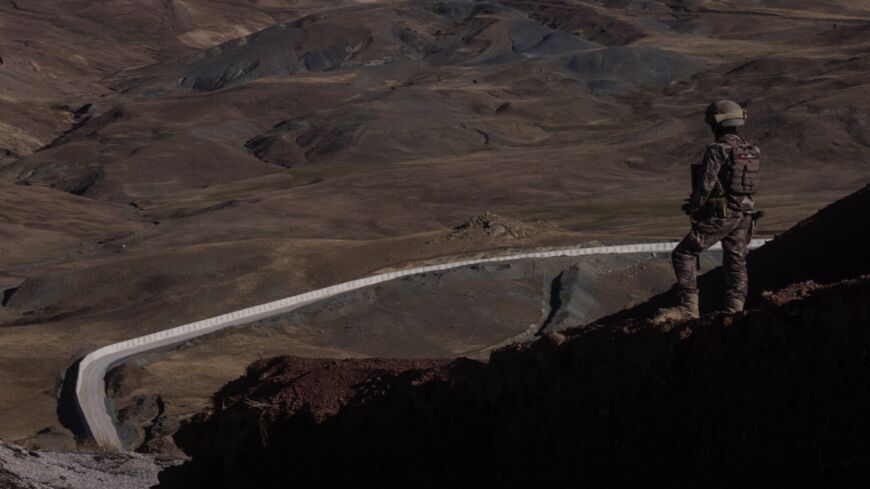 A Turkish Special Forces Police officer is seen standing watch during a press tour at a border outpost in front of a section of the new Iran-Turkey border wall on Sept. 27, 2021, in Caldiran, Turkey. - Chris McGrath/Getty Images

The reported capture of Iranian spies in Turkey comes as the latest sign of the rivalry heating up between Ankara and Tehran, as bilateral tensions over Iraq and Syria have been steadily expanding to the Caucasus since last year’s war between Armenia and Azerbaijan.

Turkey extended strong military support to Azerbaijan, its close ally and ethnic cousin, to help it prevail over Armenia in the six-week war over the disputed enclave of Nagorno-Karabakh, pursuing a strategic vision that has irked Iran. The conflict ended in November, with Azerbaijan regaining control of several regions under Armenian occupation since the early 1990s. The new reality on the ground has fueled rows over regional transport links, underlain by broader geopolitical interests and growing Iranian concerns over Azerbaijan’s ties with Turkey and Israel.

Amid simmering regional tensions in the wake of mutual military drills, Turkey’s state-run Anadolu news agency reported Oct. 13 that the National Intelligence Organization and the police had uncovered an Iranian spy network in the eastern city of Van, some 100 kilometers (60 miles) from the Iranian border. According to Anadolu, eight people, among them two Iranian agents who were planning to abduct a former Iranian soldier residing in Van, were detained in the operation that took place Sept. 24. The Iranian agents had allegedly offered money to the target’s wife to enlist her collaboration and threatened to harm her relatives in Iran if she refused. On Oct. 4, a court ordered the imprisonment of all eight suspects pending trial on espionage charges.

Arif Keskin, a Turkish expert on Iran, told Al-Monitor he finds the incident fishy, even though Iran makes no bones about targeting dissidents and has publicized previous abductions to message its public that Turkey is not a safe place for defectors. Keskin questioned why a former soldier worthy of an undercover abduction would hide, together with his wife, in a city that is close to the border and easily accessible by Iranians. That the incident was made public belatedly speaks of an intentional timing that is definitely related to the tensions in the Caucasus, he argued.

Earlier this year, Turkish authorities arrested a staff member of the Iranian consulate in Istanbul over the murder of an Iranian dissident in the city in 2019. Saeed Karimian, owner of the Persian-language Gem TV, was killed in a similar shooting on an Istanbul street in 2017.

In September, Turkey and Azerbaijan held two military exercises in Azeri territories reclaimed from Armenia, with Pakistan joining them in a third one. Tehran decried the drills as an affront to an agreement between Caspian littoral states to not allow foreign military presence in the region and launched rather menacing wargames near the border with Azerbaijan Oct. 1. Referring to Azerbaijan’s close military cooperation with Israel, Iran’s foreign minister warned that Tehran would neither tolerate Israeli presence near its borders nor allow geopolitical changes in the region, implying that Israeli agents were active in the region. He denounced also “the transfer of some terrorist groups” to the region — a reference to fighters that Turkey transferred from Syria to back Azeri forces during the war. The day the wargames kicked off, Armenia’s defense minister met with the Iranian ambassador to Yerevan to discuss security cooperation, and Tehran hosted the Armenian foreign minister several days later.

Tehran named the drills “Conquerors of Kheibar” after the Battle of Khaybar, in which Muslims, led by the Prophet Muhammad, fought Jews in the seventh century, aiming clearly at Azerbaijan’s military ties with Israel and drawing a red line to any Israeli presence near its borders. Yet, its reactions have been driven by broader concerns of a geopolitical shift in the region.

The Iranian media and think tanks have been arguing since last year that Azerbaijan is colluding with Turkey, Israel and the United States for a geopolitical shift that would harm Iranian interests in the region. Fueling such fears is a provision in the cease-fire deal between Azerbaijan and Armenia. The provision calls for a transport route between mainland Azerbaijan and its exclave of Nakhchivan across Armenia’s southernmost province of Syunik, known also as Zangezur, which separates the two Azerbaijani territories and forms Armenia’s border with Iran. Since Turkey shares a tiny border strip with Nakhchivan, the envisioned transport corridor has inflamed Turkish strategic dreams of unobstructed access to the Caspian basin and Central Asia, including the prospect of land and rail connections and pipelines.

For Iran, however, such a corridor would undo the commercial and political leverage it has enjoyed as a go-around route for decades. Moreover, the Iranians fear the corridor might be set up in a way that would block the border link between Armenia and Iran, and see such an eventuality as a red line.

Azerbaijan’s territorial gains from the war have already stirred trouble for Iranian truckers. The Azerbaijani authorities, who now control a 21-kilometer (13-mile) stretch of a road connecting two southern Armenian towns not far from the Iranian border, set up checkpoints on the route in September and began charging fees from Iranian truckers. The arrest of two drivers for illegally carrying goods to Nagorno-Karabakh further angered Tehran.

According to Iranian daily Kayhan, the envisioned corridor is an attempt to undermine Iran economically, politically and in terms of security, and Tehran will never accept a border change. Fars News, for its part, argues that Erdogan is trying to recast himself as the leader of the Turkic world to recover the reputation he has lost against “the resistance front” in Syria and Iraq.

To convince Armenia, secure Russia’s acquiescence and appease Iran’s concerns on the corridor, Erdogan has proposed a six-way cooperation platform involving all countries in question as well as Georgia.

His proposal, however, could hardly entice the Iranians, according to Keskin. “The corridor would have scores of adverse consequences for Iran. First and foremost, it would sideline Iran as an energy route,” he said.

The Turkish and Iranian deputy foreign ministers met in Ankara Oct. 8 to discuss the tensions, but no details were shared about the outcome of the talks.

The foremost factor that could compel Iran to cooperate would be a Turkish move to normalize relations with Armenia, but such a prospect remains distant.

Up until the Nagorno-Karabakh war, few had expected that the 2010 defense cooperation deal between Turkey and Azerbaijan would be so consequential on the ground. The alliance between the two countries is only adding to Iran’s national security concerns. And Turkey’s growing role in the militarization of the geopolitical power struggle in the region makes it easier for Azerbaijan to defy Iran.

Keskin noted that Baku had long heeded Tehran’s security concerns, including through stiff measures against Iranian dissidents, but after Iran’s menacing military drills, the political climate has reverted back to that of the early 1990s when the then-President Abulfaz Elchibey saw Iran as an enemy. Hence, the warning Tehran intended to convey through the wargames has backfired, with Azerbaijan likely to further expand its ties with Turkey and Israel.

That said, the Turkish-Iranian rivalry is likely to heat up beyond the Caucasus, namely in Iraq. Ankara, which had relied on its Turkmen kinsmen and Sunni Arab groups to counter Iran’s influence in Iraq, saw its leverage badly damaged amid the rise and collapse of the Islamic State, while Tehran managed to improve its ties with both Sunni Arab and Shiite Turkmen groups.

Now, the outcome of the Oct. 10 elections in Iraq offers Turkey more room to maneuver, while making things harder for Iran. The Sunnis emerged as the second largest force in parliament and the Turkmen entered parliament as a united force, while the Conquest Alliance, linked to Iran-backed Shiite militia, suffered a major setback.

Still, it would be wrong to assume that this outlook automatically repairs Turkey’s damaged influence. Multiple factors dictate a more sophisticated approach by Ankara, including the Sunnis’ division into two major groups, the leaders of which have both sought to keep on good terms with Iran; the need for Sunnis to cooperate with Shiite parties in any coalition government; the Sunni leaders’ ties with the Gulf; and growing public indignation in Iraq against Turkish military presence and foreign interventions in the country. Erdogan already stumbled ahead of the elections as he tried to unite Mohammed al-Halbusi and Khamis al-Khanjar, the two Sunni leaders. He received them separately Oct. 4, failing to get them together even for a photo-op.

In its Iraqi experience, Turkey has taken harm from the sectarian feuding in the country, and the rivalry in the Caucasus might undermine its strategic goals as well.