There are calls in Sanaa to form a union to defend the rights of singers, amid ongoing abuses and arrests targeting them by the Houthi rebel authorities. 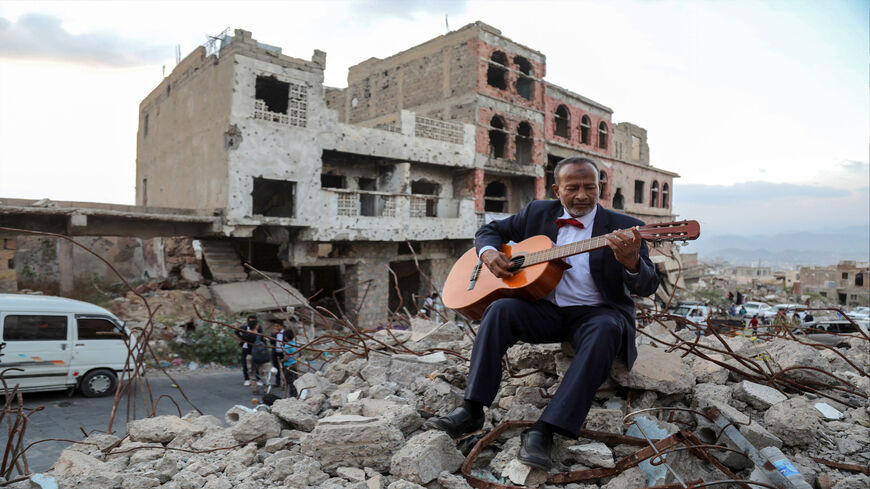 A Yemeni artist sitting atop the rubble of a collapsed buiding plays the guitar during a street performance, Taez, Yemen, Dec. 6, 2019. - Ahmad al-Basha/AFP via Getty Images

Judge and human rights defender Abdul-Wahab Qutran said in a tweet, "Arresting Aseel Abu Bakr by the Sanaa branch of the Taliban [in reference to the Houthis] from a wedding venue in the Madhbah area is an imprescriptible offense."

Qutran addressed the Houthi authorities, saying, “Who are you to criminalize permissible actions contrary to the constitution and the law."

Singer Adham Sufyan said in a Facebook post that Bakr’s “only guilt is that he is a singer who loves peace, loves art and makes people happy in these circumstances and amid the tragic situation [in the country]. People attend weddings to change their psychological state because of the [tough] situation and the war."

Abdul-Malek al-Jermouzi, a Sanaa-based journalist, said in a Facebook post, “If you arrest singers, we will use MP3, YouTube … cassette tapes and radios. We are going to sing for ourselves even if our [voices] are not pretty, that’s fine. The important thing is to entertain ourselves and vanquish [the Houthis].”

The owner of Al-Asemah Hall, where the wedding was held, spoke to Al-Monitor on condition of anonymity given the sensitivity of the case. He said that a circular from the Houthi-run Ministry of Interior issued a month ago notes that "indoors and outdoors loudspeakers [are banned] after 10 p.m. [but not music]."

Addressing the circumstances of the arrest, the venue's owner said that after 10 p.m. on Aug. 31 the singing at the wedding continued to be broadcast through loudspeakers, though he had warned the singer and the family hosting the wedding about the circular. His warning went unheeded, as “there were youth who wanted to continue the [party].”

Around midnight, the owner said, “A police car [belonging to the Houthis] arrived outside the venue and police reached an agreement with the family that singing could continue, but without loudspeakers." The police car then left, he noted.

“After the police left, the singer was told [by the youths attendees and the family hosting the wedding] that they had agreed with the police that it was fine to continue singing with loudspeakers,” the owner added in a phone call. “As the singer continued, a military vehicle arrived. They arrested the singer and a member of the wedding family around 1 a.m. [Sept. 1].”

On Sept. 1, Abu Bakr was released but not the family member, the owner said. Abu Bakr then published a video on Facebook, saying, "I would like to assure you that all is well regarding the misunderstanding that happened," thanking everyone who contacted him or visited him, without saying he was arrested, who arrested him or how he was released.

Al-Monitor contacted Abu Bakr’s office, but a representative declined to arrange for an interview given the sensitivity of the topic and noted that Abu Bakr was performing at a wedding party.

Asked about his reaction to the decision to prevent the use of loudspeakers after 10 p.m., the owner refrained from offering his personal opinion, but said, “There was a circular posted on the entrance to the hall and we can’t violate it. Those who violate it will face arrest for a month and a fine of 100,000 Yemeni rials [$167 at black market rates]."

In June, the Houthi-appointed governor of Sanaa, Abdul-Basit al-Hadi, released a document stating that heads of districts and local councils should "curtail the phenomenon of singing and singers performing at events and weddings by promoting 'Quranic awareness' within the community," according to The Arab Weekly.

Abu Bakr was not the first singer to be arrested recently. In early August, local media reported that Houthi authorities had confiscated musical instruments and arrested a prominent singer — Fuad al-Kibsi — in Hodeidah while he was on his way back to Sanaa after performing at a wedding party.

Ibrahim Ammar, business manager of the rising star Amr Moqbel, known in the Arab world as the "Water Seller," told Al-Monitor in a phone call that Moqbel has never faced abuse nor arrest from the Houthis during weddings.

Ammar pointed out that although the Houthis have banned music in the Mahwait province, the arrest of Abu Bakr for singing using loudspeakers doesn’t mean that the Houthis can ban music in Sanaa, “because singers have a wide and varied audience [in the capital]."

Last July, Houthis stormed a wedding party in Amran and arrested three singers and the bride, a scene that was caught on video that was then circulated on social media. Al-Monitor could not independently verify the video. Journalist Fahd al-Arahabi was arrested for publishing videos of the storming of the hall and was released in early August.

Al-Monitor visited the Houthi-run Ministry of Culture in Sanaa to speak with an official about the authorities' stance on what is happening with singers. Abdul-Malek al-Qata'a, director of the copyrights department, declined to speak about the matter directly and referred Al-Monitor to an interview with Houthi Deputy Minister of Culture Mohammed Haydarah that aired on Yemen TV, who spoke about the arrest of Kibsi. Haydarah did not respond to Al-Monitor's request for comment.

Haydarah, who belongs to the Houthi's National Salvation Government, which is not recognized internationally, said in an interview on Yemen TV three weeks ago, "The state guarantees the citizen freedom in everything that belongs to him unless he offends his faith. But the actions that might happen — whether in Hodeida or Amran — for Mr. Fuad al-Kibsi or others, are individual."

He continued, “There are regulations issued about how to deal with Yemeni wedding parties so that Yemeni identity is maintained and the rights of the wedding party’s family are guaranteed without bothering them or causing harm.”

Sufyan also called on singers to “form a union to defend their rights and to issue statements in case a singer faces any abuse or detention.” He added that singers fear going out to perform at weddings outside the capital Sanaa because of “harassment, detention and other illegal abuses."

Ammar said it would be impossible for singers and the Houthi-run Ministry of Culture in Sanaa to reach an agreement to prevent the abuses that singers face and allow them to sing freely, given a "lack of willingness” on the part of the ministry.