Yemen's Houthi rebels are drawing comparisons between the Taliban takeover of Kabul, which caused President Ashraf Ghani to flee Afghanistan, to their own takeover of Sanaa and Aden in 2014 and 2015. 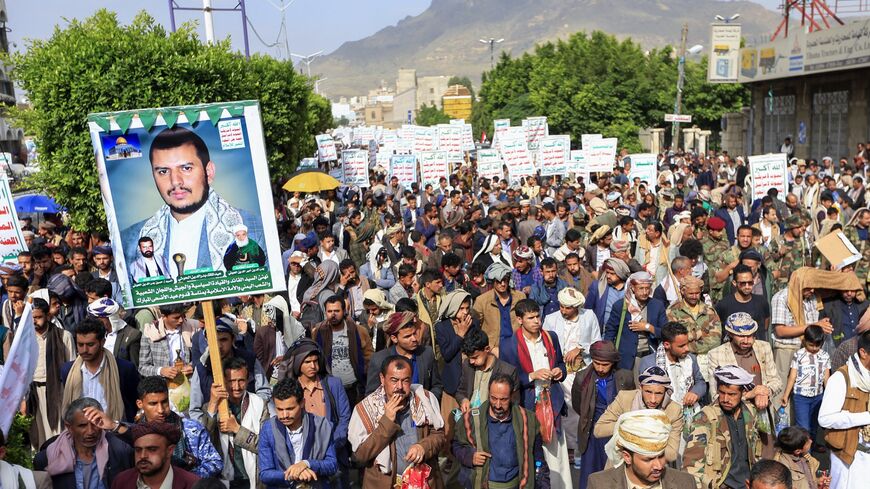 Supporters of Yemen's Houthi rebels led by Abdul-Malek al-Houthi (portrait) attend a rally to protest the blockade imposed on their country by the Saudi-led coalition, in the capital, Sanaa, on Aug. 8, 2021. - MOHAMMED HUWAIS/AFP via Getty Images

SANAA, Yemen — Following the Taliban takeover of Kabul on Aug.15, senior officials from the rebel Houthi group, which has been fighting the Saudi-led coalition-backed government in Yemen since 2015, were swift to react to the Taliban's rapid advance against the Afghan government amid an imminent US-led coalition withdrawal.

Ejri’s tweet shows a Houthi desire to end the conflict with an agreement with the Saudi-led coalition similar to the US-Taliban agreement.

Abu Mohammed, a nickname for a political analyst based in Sanaa, told Al-Monitor that the Houthis are hoping Saudi Arabia will "recalculate its involvement and get out with minimal cost and an agreement between the Houthis and the coalition that's going to make it easier for the Houthis to control the government-held provinces.”

Abu Mohammed, who is originally from Taiz and spoke on condition that his real name not be used for security reasons, continued, “The US withdrawal is going to strengthen the Houthis’ bargaining position, whether with the Hadi government or the Saudi-led coalition." He added that "the fall of Kabul is also an inspiration not only for Houthis, but also for Hezbollah and Hamas."

Abu-Bakr al-Mohdar, a journalist based in the oil-rich city of Shabwa, told Al-Monitor there are “no fears” in government areas that the coalition will abandon them or of a Houthi attack because government forces “expelled the Houthis from Aden and districts in Dhale, Shabwa, Taiz, Marib and Jawf” following their takeover in 2015.

Houthi spokesman Mohammed Abdul-Salam also tweeted in reaction to the fall of Kabul, saying, “Every occupation has an end, in a long or short time, and now America is reaping failure after 20 years of occupying Afghanistan, so would the countries of aggression consider this lesson?!”

In a reaction to this tweet, the executive director of the Sanaa Center, Majed Al-Madhaji, tweeted: "Mohammed Abdul-Salam invokes the Taliban model to preach and warn us about it ...[yet] the two are similar to each other: the Houthis and the Taliban." He added, "The Taliban is the same as the Houthis, with minor differences."

The Houthis took over Sanaa in September 2014 and signed an UN-sponsored Peace and National Partnership Agreement with other warring parties. Houthis also allied themselves with former President Ali Abdullah Saleh until they killed him in 2017.

In January 2015, clashes erupted in Sanaa between the Houthis and President Abed Rabbo Mansour Hadi's forces. The Houthis took over the presidential palace on Jan. 21, 2015; Hadi fled house arrest to Aden in February 2015 and to Saudi Arabia in March 2015.

The plumes of smoke seen Aug. 15 on international broadcasts rising from the US Embassy in Kabul — as diplomats burned sensitive documents in anticipation of the Taliban takeover — had likewise been seen near the US Embassy in Sanaa in 2015. The US mission there had destroyed documents and weapons before withdrawing from Sanaa on Feb. 10, 2015.

Ahad Yaseen, a citizen from Aden currently in exile, told Al-Monitor that the Houthis will attack southern provinces if “the national army, resistance and the Arab coalition stop fighting them."

Yaseen said that if the Houthis do take over southern provinces, “a few citizens” may flee but “the majority are going to fight them as they did in 2015."

He said that after the rebels took over Aden, “Citizens resisted the Houthis and fought them with all the power and weapons they had." The Houthis were evicted from Aden in July 2015 with Saudi coalition support.

Howed Al-Kaladi, a journalist based in Aden, told Al-Monitor that the Houthis won’t attack southern provinces because “they lack popular support” there. He also said the Houthis are going to “maneuver militarily on borders” that existed between north Yemen and south Yemen before the unification of 1990 “to prevent the advance of [the secessionist] STC forces on their provinces, as STC forces captured al-Zaher in al-Bayda” in early July but then withdrew after a Houthi counterattack. The STC is the Southern Transitional Council.

Kaladi said he doesn't think the Houthis will launch an offensive soon. He said he thought that instead there is "going to be a dialogue between two strong parties, and this is what the coalition wants to happen — not between three parties [the government, the Houthis and the STC] on the ground, but after one of the three parties is finished.”