Yemeni President Hadi's six-year exile in Riyadh has eroded his legitimacy in the eyes of manyYemenis who do not expect his return home, and realize that even his return will not be a cure-all for Yemen's plight. 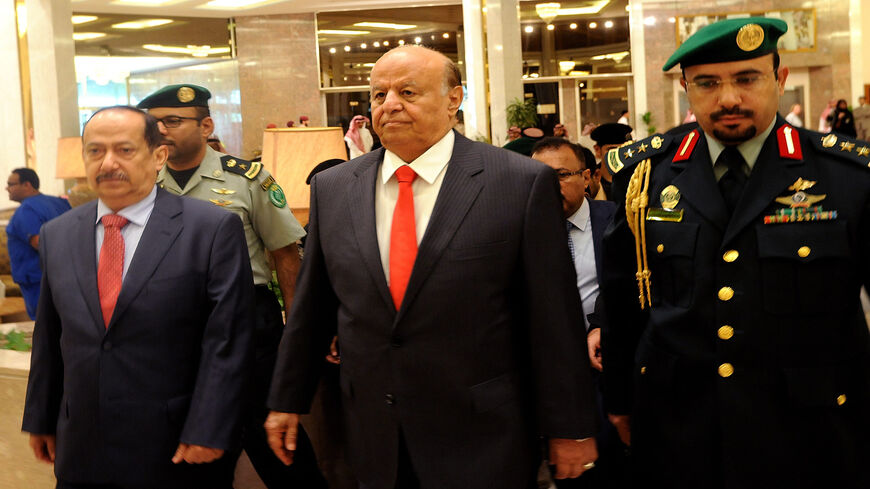 The year 2015 was an indelible watershed for multitudes of Yemenis. It was the year in which the Houthis toppled the UN-recognized government, forming a new one, and ushered in political tumult in Yemen. It was also the year when President Abed Rabbo Mansour Hadi escaped from the Houthi house arrest in Sanaa and headed to Aden. In March of that year, Hadi fled again — this time from Aden to Saudi Arabia, running away from the Houthi fighters who kept advancing toward his palace.

A recent report by The Associated Press on a secret Island being built by the Arab coalition on the Yemeni Mayun Island in the Red Sea has raised a question on whether Hadi is aware of the matter. This development has infuriated the people in Yemen, and it dealt another blow to Hadi's legitimacy in the public's view.

Notwithstanding that Hadi remains the country's legitimate president with the recognition of the United Nations and regional powers, his six-year exile in Riyadh has eroded his legitimacy in the eyes of many in the grassroots movement in Yemen.

Now over six years have gone by and Hadi remains in exile. The country has gone through war, poverty and fragmentation. On top of that, it is not known when peace can prevail and when Hadi can fly back home.

Since March 2015, an Arab coalition, led by Saudi Arabia, has been waging war on the Houthis in order to restore Hadi to power. Neither Hadi has been reinstated in Sanaa, nor has he returned to stay elsewhere in Yemen.

Abdulraqeeb al-Hidiani, an Aden-based political analyst, said Hadi has let the people down and forgot that people accepted to elect him in a one-candidate election out of their desire for peace, stability and the rule of law. Hidiani told Al-Monitor, "President Hadi is not firm, and he is now incapable of solving the crisis Yemen is going through. We do not expect any good from him."

In February 2012, Hadi was elected in the one-candidate election to serve a two-year term as the president as part of a power transfer agreement brokered by the Gulf Cooperation Council. Throughout the two-year transition period, the political parties engaged in a national peace conference to decide on a new Yemen.

The political instability worsened when the two years ended amid unsuccessful preparations for a presidential election. The country abruptly slid toward anarchy once the Houthis seized the capital Sanaa in September 2014, while Hadi's leverage began shrinking.

Mohammed al-Samei, a Taiz-based journalist, focusing on political affairs, reckoned that the security situation in Yemen had blocked Hadi's return. He told Al-Monitor, "The instability and fragmentation in the government-controlled areas form a big impediment for Hadi's return. There appears no safe place for him in Yemen. Given this reality, he does not have a genuine desire to return to the country given the security risks he will face."

One argument is that the Saudi-led coalition is concerned about the safety of Hadi. He was the one who officially requested military intervention from Saudi Arabia in 2015. An end of his legitimacy will create a new political scenario in Yemen, which could trouble the Saudi-led coalition. "The coalition countries have been using Hadi as a cover for their military operations in Yemen. He gave them the go-ahead as a president, but now he does not seem to be able to stop them or direct them on what to do," Samei said.

After six years of living outside Yemen, the hope of Hadi's return has vanished. Should he return, he would not fix all the intricate issues in the country. Samei noted, "If President Hadi comes back from exile, it does not mean we will see a rapid improvement of the living situation of people nationwide. His return will not make a big difference in the lives of Yemenis, particularly at the economic and security levels."

Nowadays, the country is fractured among three main sides: First, the Houthi group controls most of Yemen's north, and it keeps trying to expand through military operations. Second, the separatist forces enjoy a considerable presence in Aden, Abyan, Dhale and Lahj in southern Yemen. Third, Marib, Shabwa, Hadramout, Mahra and Taiz city show allegiance to Hadi. It is a complex struggle for influence and territory.

Some civilians in Yemen say Hadi has lost legitimacy for being outside Yemen for several years. Ezdeen Mahdi, a university student in Sanaa, believes that Hadi is no more a legitimate president as he has been unable to exercise duty from Yemen. Mahdi told Al-Monitor, "I have not heard about the distance presidency in any country. He keeps staying in Riyadh and acts as the president of Yemen. This is illogical. Leaders are elected to serve people and live with them to solve their problems."

As the war in Yemen continues and political efforts have repeatedly misfired, Hadi's return does not seems increasingly unlikely. For him to operate from Yemen, three things need to happen. First, Hadi needs Saudi support and permission. Second, he needs the approval of the United Arab Emirates that plays a vital role in the south through the southern separatist forces. Third, he would need to be protected against any Houthi drones and missiles that can hit anywhere in Yemen.

Hadi's six-year exile in Riyadh is not only a demerit to his political legacy but also a reflection of the Saudi-led coalition's failure to date in Yemen. "Efforts to strike a political settlement have failed, and the pro-Hadi Saudi coalition has not achieved a military win over six years. Both Hadi and the coalition share the responsibility for the appalling ordeal in Yemen," Samei concluded.