Saudi Arabia announced a new peace initiative to end the 6-year-old war in Yemen at a time when there has been a military escalation and peace talks have stalemated. 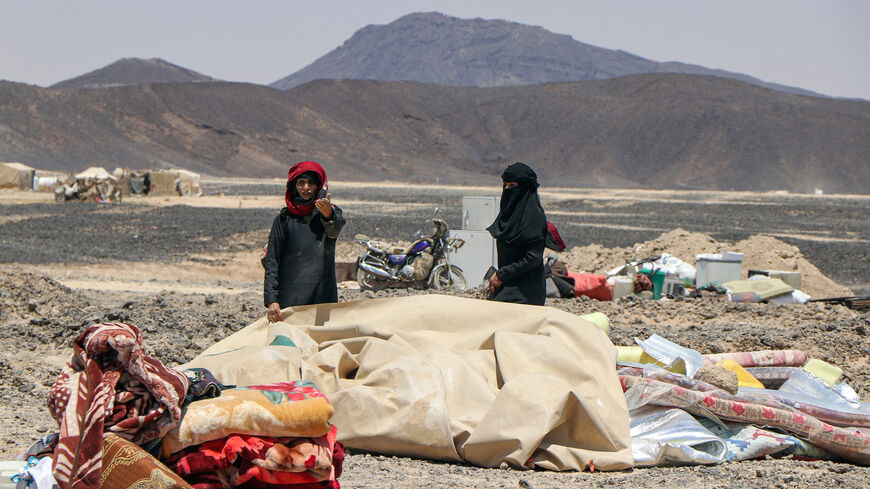 Women wait next to belongings at a camp for the internally displaced about 10 kilometers (6 miles) from Yemen's northeastern city of Marib on March 28, 2021, as residents of the camp prepare to flee due to its proximity to battles between Houthi forces and Saudi-backed government troops. - AFP via Getty Images

The war in Yemen has entered its seventh year, and diplomatic efforts remain ineffective when it comes to opening the door to peace. All previous peace drives hit stalemates amid a continued surge in violence in this war-torn country. Still, diplomacy has not been abandoned and pleas for peace have been unceasing.

On March 22, Saudi Arabia presented a peace initiative to wind down the war in Yemen. The proposal laid out the need for a comprehensive cease-fire, reopening Houthi-controlled Sanaa International Airport, and allowing fuel ships to dock at Houthi-run Hodeida. Saudi Foreign Minister Prince Faisal bin Farhan pronounced the initiative in Riyadh, saying, "We want the guns to fall completely silent."

But Houthi spokesman Mohammed Abdulsalam quickly said the initiative did not propose anything new.  He wrote on Twitter, "Any stance or initiative that does not note that Yemen has been subjected to six years of aggression and siege and that does not separate the humanitarian issue from any military or political agreement … offers nothing serious and nothing new."

Many countries, including the United States, the UK and China, voiced support for the new Saudi peace drive, calling on the warring sides in Yemen to seize the opportunity. But while this backing for the initiative appears to be good news, it means little to multitudes of Yemenis.

Six years of war and recurring failures of political negotiations have made civilians in Yemen skeptical about the viability of peace talks and efforts. When a peace initiative is mentioned in front of civilians in Yemen, they may react with a cynical smile, a deep sigh or nonchalant silence. Or they raise their eyes toward the sky and pray for the end of the war in this country.

Upon hearing the news of the recent Saudi peace proposal, people Al-Monitor spoke with in Yemen exhibited various views. A political observer doubted such a step's success and a journalist also was not hopeful about its outcome. A teacher said the proposal is not a magic wand to end the war in Yemen and a university student said the war is still far from over.

Adel Dashela, a Yemen researcher in Turkey and author focusing on Yemen, told Al-Monitor that the new Saudi initiative does not address the root of the problem and ruled out the possibility of the proposal's success. "Houthis are seeking to establish an ideological state. They will not accept any political participation or power sharing. Democracy and plurality are taboo in their political thought."

Since the eruption of the 2011 uprising in Yemen, Saudi Arabia has engineered two main peace proposals. In 2011, it presented the Gulf Cooperation Council Initiative, which intended to end the dispute between then President Ali Abdullah Saleh and political rivals. That peace plan faltered and the country plunged into turbulence, particularly when Yemen's capital fell to the Houthis in September 2014.

Moreover, Saudi Arabia in 2019 sponsored the Riyadh Agreement between the UN-recognized government and southern separatists. So far, the agreement has not been fully implemented, and the south remains in tumult.

Dashela said, "Peace is not just signing some agreements, shaking hands and talking to media. From my point of view, negotiating about peace with theocratic militias is a big illusion. It is clear that Saudi wants to have a face-saving exit from Yemen."

On March 28, UN and US envoys met with Yemeni President Abed Rabbo Mansour Hadi in Riyadh, discussing Yemen's conflict and the Saudi initiative. UN envoy to Yemen Martin Griffiths emphasized seizing the current momentum for peace and the support from the international community.

Mohammed Al-Samei, a Taiz-based journalist, said the initiative has positive aspects and could lead to positive change. He told Al-Monitor, "Ceasing hostilities, resuming flights to and from Sanaa international airport, allowing the flow of ships to Hodeida ports are urgently needed. The words of the proposal are clear, but its full implementation is not certain."

But Samei said, "The implementation of this initiative does not mean an end to the conflict in Yemen. Fragmented forces and groups will not disappear from the scene, and this means military confrontations can flare up any moment."

On March 30, Oman, a neutral mediator between the Houthis and Saudi Arabia, said it hopes a deal  to restore security and stability in Yemen will be arrived at "very soon."

The damage to Yemen and its people has been massive. Food insecurity, diseases and displacement plague millions of people. Amar al-Amari, a schoolteacher in Sanaa, told Al-Monitor that a peace initiative cannot wipe out this nation's plight overnight. "I am not happy about this Saudi proposal; either it succeeds or not. The war has destroyed every beautiful thing in this country. How and when can we reclaim the joy and tranquility of our prewar life?" Amar asked.

The complexity of the conflict in Yemen has deepened over the last six years. The solution appears far away in the view of countless Yemenis. Mansour Saleh, a university student in Sanaa, said he could not imagine that the Houthis and the Yemeni government would reach a consensus one day and run the country together.

Saleh told Al-Monitor, "The warring parties have not agreed on making repairs and maintenance to the decayed Safer oil tanker, which may cause an environmental catastrophe to Yemen's coastal cities. So I can expect that they will fail to act now to repair the damages they have caused to this nation. This Saudi peace initiative is just meant to depict the kingdom as a peacemaker."