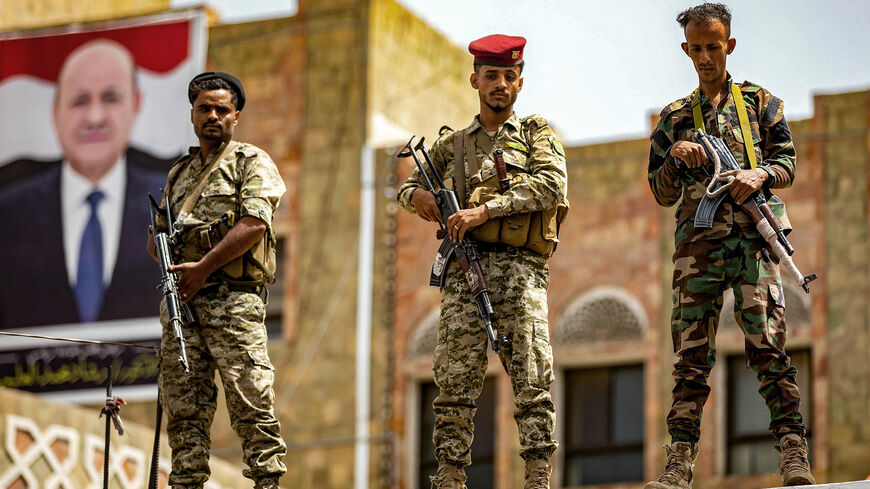 Soldiers loyal to the Aden-based Yemeni government stand guard before a poster showing the chairman of the presidential council, Rashad al-Alimi, while on guard duty during a demonstration demanding the end of a yearslong siege imposed by the Houthi rebels on the city of Taez on May 25, 2022. - AHMAD AL-BASHA/AFP via Getty Images

On June 6, Rashad al-Alimi, head of the Presidential Leadership Council (PLC), began dayslong tours to Kuwait, Bahrain, Egypt and Qatar. The official visits come two months after the formation of the PLC, which stands today as Yemen's internationally recognized authority.

Yemen's former UN-recognized President Abed Rabbo Mansour Hadi had been in exile in Riyadh over the last seven years and conceded power in April this year. He rarely visited other countries during his tenure. And if he did, he would not return home. He used to go back to his residence in Riyadh.

Yemen's new leadership is no longer sticking to that norm. Instead, it is inside Yemen and has set off its recent official tours to the region from Yemen — no longer from exile.

Alimi stated his purpose when departing from Aden in southern Yemen, tweeting, "Our foreign tour focuses on strengthening bilateral relations with a number of brotherly countries, the developments in Yemen and ways to mobilize support for the ongoing reforms in the country."

This move has been contentious for Yemenis, sparking differing perceptions and conflicting reactions nationwide. While many deemed the tours crucial for obtaining political and economic support, others doubted the tangible benefits Yemen will have from visiting some countries.

The focus of the PLC is not solely on readying for war. It also keeps the economy on its agenda. Inflation, currency devaluation and fuel shortages are troubles that have tormented people over the last seven years of war.

Mohammed al-Samei, a political journalist in the government-controlled city of Taiz, told Al-Monitor that these tours will enable the PLC to garner economic backing from Kuwait, Bahrain, Egypt and Qatar.

"The support will hopefully help solve some problems, including inflation, currency downfall, hunger and displacement. Leaving these issues unattended is a form of war on civilians in Yemen. Actions need to be taken to address this saddening reality. And this is what the PLC seeks to achieve," Samei said.

Recent UN reports indicated over 23 million people in Yemen need assistance, estimating that the fighting has killed more than 150,000 people since the war began. Besides, 200,000 others have died indirectly from diseases, hunger and unsafe water.

Saleh Abdulrahman, a resident of Aden where the PLC is headquartered, told Al-Monitor that the presence of this leadership on the ground in Yemen and its recent tours to other countries have been a source of hope for better governance in government-run areas. Presently, government forces and allied armed groups control Yemen's south besides some areas in northern Yemen. The Houthis dominate the majority of the territories in the north.

"I can say that this new leadership will be better and stronger. The proof is its existence in Yemen and its energy to galvanize regional and international assistance for overcoming this difficult situation. What we urgently want from this leadership is better basic services such as electricity and stable security in Aden and all southern provinces," said Abdulrahman.

The conflicting agendas of the Saudi-led coalition over the last seven years weakened the authority of former President Hadi. He did not receive the needed backing to enable his return to Yemen, and that kept him in exile after he fled from Yemen in 2015. The country has drowned in numerous ordeals, and the war has continued unabated. People in Yemen had lost hope for betterment should the same leadership remain in power.

Samei reckoned that Yemen's new leadership seeks two major kinds of support: economic and military. "At the military level, the ongoing truce is fragile, and thinking that the Houthis are ready for peace is wrong. Therefore, these visits could be part of preparing for a fiercer war after the expiry of the truce." The UN-sponsored cease-fire is set to expire on Aug. 2.

At the state level, anti-Houthi Yemeni officials are optimistic about the outcomes of the PLC's visits to Kuwait, Bahrain, Egypt and Qatar. The garnered support will help the leadership confront the miserable conditions that the war has created, said Ahmed al-Barti, member of the Yemeni parliament.

Addressing the war consequences in a matter of months seems far-fetched. But Barti thinks that the PLC president, Alimi, is "the man for the difficult phase." He added, "Alimi carries a vision to bring stability in Yemen, end the war, and proceed toward sustainable and lasting peace."

Not everyone in Yemen is optimistic. The destruction the country has endured, and the magnitude of the humanitarian suffering makes many Yemenis believe that this new leadership does not have the magic wand to heal this war-ravaged nation.

Khalil Muthana Al-Omari, editor-in-chief of the Raialyemen news website, told Al-Monitor that the recent visits by Yemen's new leadership to a number of Arab countries are not an achievement to be celebrated.

"What they have done is not a great accomplishment as long as the Yemeni citizens cannot travel freely and safely from one city to another in their own country. The civilians who have been crushed by poverty, joblessness and a scathing summer in the absence of electricity do not care about Yemeni officials flying from one country to another," said Omari.

He added, "The state's responsibility is providing services such as security, electricity, livelihood sources and fighting corruption. Nobody [in Yemen] cares about how the Yemeni state officials look, what they wear and which countries they visit. Citizens have interest only in the actions that can lessen their misery."

Majed Salem, a resident of Aden, agrees that people in Yemen want to see tangible benefits from this leadership, arguing that official visits to other nations cannot be a cure-all for the country's internal dilemmas.

One conspicuous challenge, Salem told Al-Monitor, is the lax security in Aden. "Last week, an explosive device was planted in a journalist's car in Aden. The car blew up, killing him immediately. Many armed groups exist in Aden, operating outside the control of the state. This is an instance of the concerns that need to be tackled. Seeking outside support is not a bad idea, but it does not guarantee the disappearance of all problems at home."