Houthi rebels used to brag of blowing up homes of top government officials between 2010-2014, and once the group took control of Sanaa in 2014, they continued sporadically attacking opponents' homes. But the latest attacks have captured media attention as they coincide with military defeats. 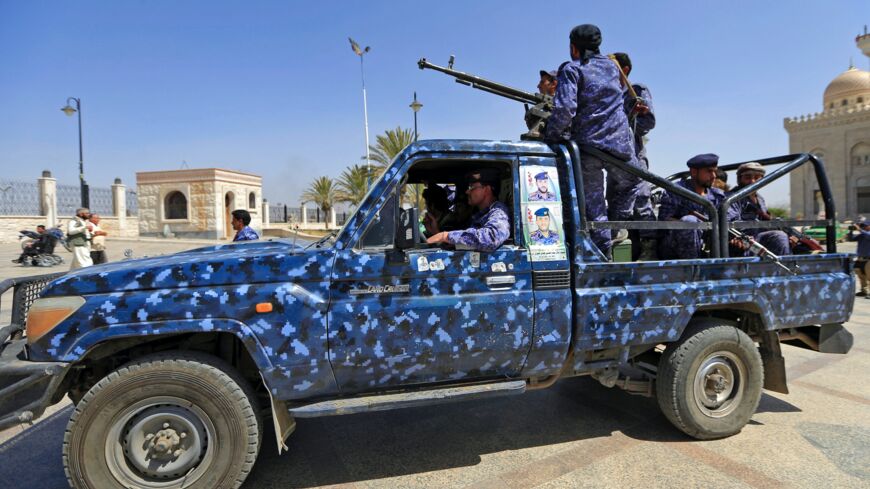 Forces loyal to Yemen's Houthi rebels guard the area around Sanaa's Al-Saleh mosque during a mass funeral for fighters killed in battles with Saudi-backed government troops in the Marib region, held on March 23, 2021, in the Yemeni capital, a day after Saudi Arabia announced a "comprehensive" cease-fire in Yemen. - MOHAMMED HUWAIS/AFP via Getty Images

Following the Yemeni government's military advance against Houthi rebels in Al-Zaher district in Al-Bayda province and the Rahabah district in Marib province in early July, the Iran-backed group launched counteroffensives to recapture the two districts. After recapturing Al-Zaher and some areas of Rahabah, Houthis resorted to using their old tactic of blowing up homes of opponents in these districts.

After the Houthis recaptured Al-Zaher on July 8, they blew up the home of Hussein al-Humaiqani on July 25. Houthi officials haven’t spoken about this, and Houthi-aligned media outlets have not broadcast the news. Houthis in the past have targeted the homes of people who fought against them to stop their expansion in and outside Saada in northern Yemen. Humaiqani helped government forces gain control of Al-Zaher on July 5.

Moammar al-Eryani, the information minister in the Saudi-backed Yemeni government, condemned the targeting of Humaiqani's home in a tweet: “The Houthi militia deliberately blew up citizens’ homes in the manner of terrorist organizations, terrorizing citizens and systematically avenging anyone who disagrees with it.”

Eryani also called on the "international community, the UN, and human rights organizations" to condemn the destruction of homes that he described as a “flagrant violation of international laws and covenants,” and he called for including the Houthi group and its leadership on “terrorism lists.”

What’s new about the attack on Humaiqani's home is that the Houthis didn’t appear in a video shouting their slogan “Death to America and Death to Israel” after the bombing. The Houthis, before they gained control of the Yemeni capital, Sanaa, used to shout this slogan in propaganda videos after blowing up opponents homes, like they did when they blew up the home of the former parliament speaker and tribal leader of the Hashid federation, Sheikh Abdullah al-Ahmer, in Amran in February 2014.

The Houthis’ main motives for using this tactic are not clear yet. The first time they reportedly blew up a home was that of parliament member Sagheer bin Aziz in July 2010 in the Harf Sufyan district of Amran governorate. Aziz had been fighting along with government forces before the government and Houthis reached a cease-fire agreement to end the war in February 2010.

Weeks later, clashes erupted between Houthis and Ahmer's tribes in the nearby district of Huth in August 2010. Huth is the district that Houthi leader Abdul-Malik al-Houthi’s last name is attributed to, since his grandfather lived in Huth before migrating to Saada. Al-Jazeera reported in August 2010 that Ahmer mobilized nearly 5,000 fighters who cordoned off the district before storming it.

Citing unnamed local sources, Al-Jazeera reported Ahmer defeated the Houthis and arrested nearly 60 of them, including Houthi scholar "Qasem Al-Seraji, and blew up his home and other homes in the city."

Therefore, Houthis prepared for another battle. The last clash erupted between them and Ahmer in Huth in February 2014. The Houthis controlled the district and blew up the home of Ahmer there before advancing toward Sanaa.

Essam al-Sabri, a political observer, accused all warring sides of blowing up homes of their opponents either with land mines or by airstrikes. “Both parties used blowing up homes as a war tactic against its opponent, both the government (meaning Ahmer) and the Houthis. But the Houthis have excessively used this tactic of bombing homes of opponents," he told Al-Monitor.

“Blowing up homes after gaining victory over your opponent is the tactic of militant groups, be it in Yemen, Iraq or the Levant. It’s a tactic that reveals the defeat of the executor, not his victory," Sabri noted. “Parties must abandon this tactic and abide by international laws. Blowing up homes makes the victor a loser, but whoever protects the rights and properties of his defeated opponent makes his military victory a moral victory. War has morality, and only the moral person wins the war.”

After Houthis recaptured Al-Zaher, government forces announced they had taken control from Houthis the Rahabah district southwest of Marib on July 14. This also led Houthis to launch another counteroffensive whereby they were able to recapture some areas, including the area that is home to Marib’s emergency police chief, Brig. Gen. Ahmed Saeed Durkom. They then blew up his home.

"The Houthi militia terrorists blew up my home after the defeats they've had in the last few days," Durkom said on Facebook on July 20. "They think they have won by blowing up a house, [but] they don't know that such terrorist acts make us more determined to fight them."

On July 29, Houthis blew up the house of Durkom's brother Taleb, who is a commander in the government forces in Marib. In a Facebook post, Taleb said: "The [blowing up] won't deter us from fighting them throughout past and subsequent war."

Taleb added, "The recklessness that is happening [by Houthis] in intimidating people fighting them, in excessive adversarial, and in tampering with the property of the adversaries only increase our resolve and determination to confront them no matter the cost."

When Houthis took control of Sanaa in 2014, they didn't blow up homes of opponents in the capital. But there were sporadic attacks on their opponents’ homes; on institutes in Dhamar, Ibb, Taiz, Dhale and Marib; and in Al-Bayda governorate between 2015-2020.

Eryani said human rights organizations have been documenting the blowing up of houses by Houthis since 2014. In 2020, the local organization Civil Commission for Houses Bombing Victims accused Houthis of "blowing up more than 816 houses," including 124 houses in Al-Bayda governorate.

Basheer Omar, spokesperson for the International Committee of the Red Cross (ICRC) in Yemen, said in an interview with Al-Monitor via WhatsApp his organization doesn't have an exact number of houses blown up by the Houthis. "We don't have figures on this, at least for the time being," Omar said.

Omar said the ICRC is "concerned by the humanitarian consequences of the intensifying violence in Al-Bayda governorate over the last couple of weeks," sending an argument to "all parties engaged in the hostilities to take every possible measure to protect civilians and their properties, including homes, businesses and livelihoods."