Calls are rising to separate the politics of the military conflict in Yemen from the issue of an abandoned oil tanker in the Red Sea, in light of a looming ecological disaster that could affect the entire region. 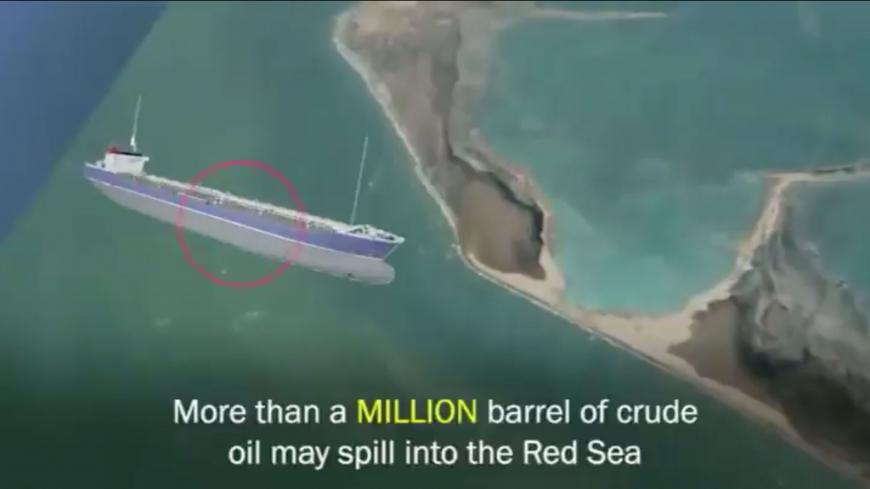 A still from a video released by the Yemeni government to illustrate the risks from a potential oil tanker spill, uploaded July 14, 2019. - Twitter/@Yemen_PM

SANAA, Yemen — Both sides in Yemen's civil war are blaming each other for blocking international aid to prevent an imminent disaster in the Red Sea that has been described as a "floating bomb."

The Houthi-run Ministry of Water and Environment in Yemen held a press conference Dec. 14 in Sanaa to appeal for help, accusing the Saudi-led coalition it is battling of preventing the maintenance and unloading of the Safer, a floating storage and offloading oil ship.

Built as a Japanese single-hulled oil tanker in 1976, the Safer has been moored 7 kilometers (4 miles) off the Yemeni port of Ras Isa in Hodeidah. It has not been maintained since 2015, when the Yemeni war broke out between the Iran-affiliated Houthis and the internationally recognized government backed by the Saudi coalition.

The Safer, owned by the Yemen Petroleum Company, has 34 crude oil tanks of different sizes and volumes, amounting to a total capacity of around 3 million barrels. Essentially a small-scale oil export terminal, the ship is estimated to contain about 1.1 million barrels of oil.

Both sides want control of the cargo, which could be worth more than $60 million, based on July oil prices.

“[We] warn against the biggest imminent oil spill disaster in Yemen and the region, which will cause an environmental disaster for the Red Sea region and Aden Gulf that may extend to the Mediterranean Sea,” Abdul-Malek al-Ghazali, acting head of the General Authority for Environmental Protection, affiliated with the Ministry of Water, said at the press conference.

“This is because the aggression states [the Saudi-led coalition countries] continue to prevent the maintenance, operation and unloading of the Safer crude oil tanker,” he added.

But the United Nations has accused the Houthis of preventing its maintenance team from accessing the tanker.

In his latest brief to the UN Security Council in September, UN Undersecretary-General for Humanitarian Affairs and Emergency Relief Coordinator Mark Lowcock said the Houthi rebels had objected to deployment of a UN assessment team and equipment to Djibouti on the Gulf of Aden coast in August, based on a prior agreement with Houthi authorities.

“I'm ... disappointed that the long-planned assessment of the Safer oil tanker has not taken place,” Lowcock told the world body Sept. 16. “We worked hard to overcome [Houthi] objections. But when it became clear that progress was highly unlikely, we just had to send the team home.”

Mohammed Ali al-Houthi, head of the Houthi Supreme Revolutionary Committee and a member of the Supreme Political Council, said the Houthis had raised several issues for the UN to consider, including compliance with the Stockholm Agreement signed last year.

He told Al-Monitor, “The UN is demanding that Houthis abide by all of its obligations under the Stockholm Agreement, but never demanded that [President] Abed Rabbo Mansour Hadi’s government implement its obligations.” He indirectly accused the UN of trying to show the world that it is concerned about the potential disaster the tanker poses, while it is not actually working to solve the root of the problem.

The tanker has become an environmental threat in part because its boilers are no longer producing the inert gas that reduces the possibility of an explosion from the gasses released by oil stored on the ship.

In April, the Atlantic Council described the ship as a “massive floating bomb.” For his part, Lowcock warned the Security Council in July that, depending on the time of year and water currents, a spill from the tanker could reach the Suez Canal — and potentially as far as the Strait of Hormuz.

“The tanker is in a pressing need for urgent maintenance,” an official of the Saudi-backed government told the Xinhua news agency Dec. 17 on condition of anonymity. He said Hadi’s government has repeatedly “called for international assistance in preventing the potentially serious oil pollution threatening the Red Sea's ecology, but received no active response.”

Al-Monitor contacted UN Envoy for Yemen Martin Griffiths' information office for comment, but was directed instead to the UN Office for the Coordination of Humanitarian Affairs in Sanaa. The latter did not comment, saying no official was available to speak to the media.

The Houthi-run government's Ghazali told Al-Monitor the Saudi-led coalition is controlling the tanker's surroundings and Yemen’s territorial waters, not allowing the UN team to reach the tanker.

According to Ghazali, Houthis withdrew from the ports of Ras Isa, Salif and Hodeidah in the spring, as per the Stockholm Agreement, and they have no presence at the Ras Isa port — so they can’t be blamed for blocking access to the UN team. However, the governor of Hodeidah, Al-Hassan Taher, who was appointed by Hadi, said in May he doubted the Houthis had actually withdrawn. He said that it was a ploy and that the Houthis were just reshuffling personnel.

Ghazali denied reports that the ship is leaking oil.

“It is not true; there is no oil spill ... so far,” he told Al-Monitor in a Dec. 18 phone call. “We visited Ras Isa a month ago, but we could not reach the port because the security situation was not stable.” He said the only way to get to the tanker is on board boats, but “warships of aggression” — the Saudi-led coalition — prevented that.

Amid this deadlock, the UN appears unable to prevent a looming ecological disaster in the Red Sea.

Houthi told Al-Monitor there is no progress in this regard. “The ball is now in the court of the aggression states,” he said, stressing that members of the Saudi-led coalition should agree to implement the Stockholm Agreement that allows “the UN and all of us to maintain and repair this ship and to assess the damage it has.”

He added, “The international community should understand that the disaster threatening the Yemeni people is the result of the blockade imposed by Saudi-led coalition."

Ahmed Ayidh, the assistant undersecretary of the General Authority for Environmental Protection, warned against politicizing the oil tanker issue in light of the environmental dangers.

“There have been reports of rusting and rending in the tanker and that its iron has begun to be affected by [water] salinity,” Ayidh told Al-Monitor from his office in downtown Sanaa, noting the Red Sea's high salinity.

“The environment [issue] must be disassociated from any political or military conflict,” Ayidh said. “It should remain like the health sector: Any teams should easily access any place to prevent a potential disaster.”