An abandoned oil tanker is a looming catastrophe off the coast of Yemen’s most vital port, threatening the livelihoods and health of vast numbers of people. 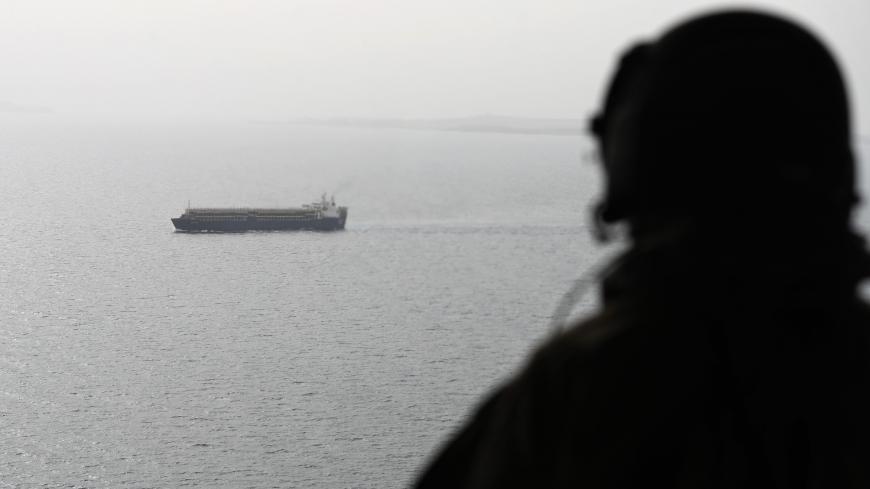 An Emirati soldier in a military plane watches a ship crossing through the strategic strait of Bab el-Mandeb, which separates Yemen from east Africa, Aug. 10, 2018. Many worry that an essentially abandoned oil tanker off Hodeidah, Yemen, will create a major environmental disaster and, among many other things, pollute the strait. (This photo was taken during a trip in Yemen organized by the United Arab Emirates' National Media Council. - KARIM SAHIB/AFP via Getty Image

An aging oil tanker moored off Yemen’s western coast has the United Nations and environmentalists warning that time is running out to prevent a humanitarian and environmental catastrophe in the Red Sea in what could be a parallel disaster to last week’s deadly explosion in Beirut.

The FSO Safer, a dilapidated ship stranded about 37 miles north of Yemen's port city of Hodeidah, contains 1.14 million barrels of light crude oil and holds the potential to unleash four times as much oil into the sea than was spilled from the Exxon Valdez tanker in 1989, the United Nations says. An oil spill on that scale would cause lasting damage to both Yemen’s economy as well as what the UN calls one of “most important repositories of biodiversity on the planet.”

The Houthis, a rebel group fighting the internationally recognized, US-backed government, seized the vessel from the government in 2015. No maintenance has been performed since, and despite repeated warnings of a looming disaster, the Iran-aligned rebels have obstructed attempts by the United Nations to send inspectors.

“We are running out of time for the slow, deliberate, step-by-step approach the UN has repeatedly attempted,” said Ian Ralby, CEO of I.R. Consilium, a global consultancy on maritime and resource security.

The priority must be extraction of the oil, Ralby said, calling the cargo a threat that needs to be neutralized “as quickly and safely as possible.” After the cargo is off-loaded, the vessel will need to be salvaged and the submarine pipeline that fed the ship drained of additional oil, he said.

None of this can occur without Houthi cooperation. Yemeni Information Minister Moammar al-Eryani accused the rebels of using the supertanker as a “tool for blackmail and bargaining," tweeting that the floating oil tanker could cause a catastrophe “100x [that] of Beirut.”

Experts say it’s not a matter of if the Safer ruptures, but when. Seawater leaked into the vessel’s engine room in May, risking an explosion. A team of divers was able to patch the leak, but without an independent assessment, the UN says it’s impossible to know what caused it. US Secretary of State Mike Pompeo recently referred to the ship as a "ticking time bomb."

The United Nations estimates that in a worst-case scenario, a spill would force a six-month closure of the Houthi-controlled Hodeidah port and cause a 200% spike in fuel costs. The cost of food, 90% of which Yemen imports, would double. In the event of a fire on board the ship, millions of Yemenis could be exposed to toxic fumes.

Holm Akhdar, an independent Yemen-based environmental group whose name means Green Dream, said the Safer risks the loss of the biodiversity and natural habitats on more than 115 Yemeni islands.

The group estimates 300 species of coral reefs would disappear from Yemeni waters because the thick film of oil would prevent oxygen and sunlight from reaching them. A spill would also put at risk roughly 1.5 million migratory birds who cross Yemen’s Bab el-Mandeb Strait to Africa each year.

Mohammed al-Hakimi, a researcher at Holm Akhdar, sees obvious parallels between the Safer and the missed warnings that led to the Beirut blast, which Lebanese officials blamed on explosive material that authorities stored improperly for years.

“The difference is that the FSO Safer will be much larger than Beirut. The humanitarian cost will be much greater,” Hakimi said.

Spilled oil would wreak havoc on a country already experiencing what the United Nations describes as the world’s worst humanitarian crisis. More than five years of war between the Houthis and the Saudi-led military coalition has left some 24 million people — 80% of the population — reliant on humanitarian aid.

The threat of famine looms over all of Yemen. A spill would sever a lifeline for UN food deliveries as the port of Hodeidah, through which most arrive, would likely close for months.

It would deal a massive blow to Yemen’s fishing industry, the country's second-largest export. Holm Akhdar estimates some 67,800 fishermen in Hodeidah alone would lose their entire livelihoods if the Safer leaks.

“It will become a global problem,” al-Hakimi said, noting the potential to disrupt globally important shipping routes in the Red Sea through which millions of barrels of oil flow each day.

In addition to impacting some 20,000 ships that pass through the waterway every year, the United Nations warns other Red Sea countries, including Djibouti, Eritrea and Saudi Arabia, would experience the fallout from a spill.

As experts sound the alarm, the rebels continue to demand assurances they could share in the revenue from the 45-year-old vessel’s oil. The cargo, they claim, is worth $40 million.

David Soud, head of research and analysis at I.R. Consilium, calls that figure “a fantasy. Having sat in hot, corroded tankers for years, he says the "degraded cargo will be a very tough sell.”

Even if Houthi estimates are correct, Soud points out the cost of any salvage operation would exceed the oil’s value.

“Is that amount of money worth risking a disaster that could kill millions? ... Is it worth long-term damage to the Red Sea?" Soud asked. He wondered whether Beirut "will help the Houthis to answer these questions.”