The European Union joined the United States and United Nations in condemning the trial and execution of nine Yemenis accused of involvement in the killing of a senior Houthi official. 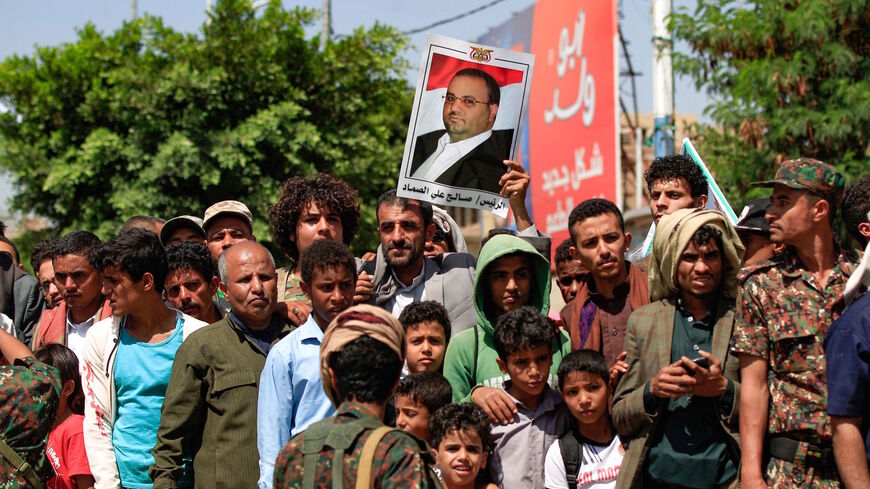 Yemeni men and children watch the execution of nine men convicted of involvement in the assassination of Houthi political leader Saleh al-Sammad three years ag at a public square in the Yemeni capital Sanaa, on Sept. 18, 2021. - MOHAMMED HUWAIS/AFP via Getty Images

The European Union has added its voice to the chorus of condemnation following the Houthi group’s execution of nine people allegedly linked to the killing of a rebel leader in Yemen.

In April 2018, a Saudi-led coalition airstrike in the port city of Hodeidah killed Saleh al-Samad, a top Houthi official in northern Yemen. On Saturday, a Houthi firing squad in the capital Sanaa publicly executed the nine men convicted of involvement in Samad’s killing, the pro-Houthi Saba news agency said.

“They were shot to death in Tahrir Square … in the presence of senior Houthi leaders and Sanaa residents,” Saba reported.

The nine Yemenis, including one who was a minor at the time of his arrest, were found guilty by a rebel-run court of spying for the Saudi-led coalition in Yemen. Several others, including former President Donald Trump and Saudi Crown Prince Mohammed bin Salman, were tried and convicted in absentia.

"The European Union strongly opposes the death penalty at all times and in all circumstances. It is a cruel and inhumane punishment,” the EU spokesperson’s office said in a statement Monday, adding that there were reports of irregularities in the judicial process and allegations of mistreatment.

United Nations Secretary-General Antonio Guterres denounced the lack of “fair trial and due process.” The top US diplomat for Yemen, Cathy Westly, also condemned what she said was a “sham trial following following years of torture and abuse" by the group.

“This outrageous action is another example of the Houthi indifference to basic human rights,” Westly said in a statement Sunday.

Yemen has been embroiled in conflict since the Houthis expelled the internationally recognized government from Sanaa in 2014. A military coalition led by Saudi Arabia intervened on behalf of the exiled government the next year.

The war has created what the United Nations calls the world’s worst humanitarian crisis. In March the Houthis rejected Saudi Arabia’s US-supported cease-fire proposal, saying the agreement didn’t go far enough to lift the coalition’s blockade tactics on the country.

This month, the rebels attacked the Red Sea port of Mokha in southwestern Yemen with missiles and armed drones, reportedly damaging warehouses storing food supplies used by traders and aid agencies. In late August, the Houthis were criticized for their arrest of a prominent singer during an overnight wedding party in Sanaa.