Yemen is without a doubt hostile to the press, but the death sentences imposed on four journalists by a Houthi court shocked many observers. 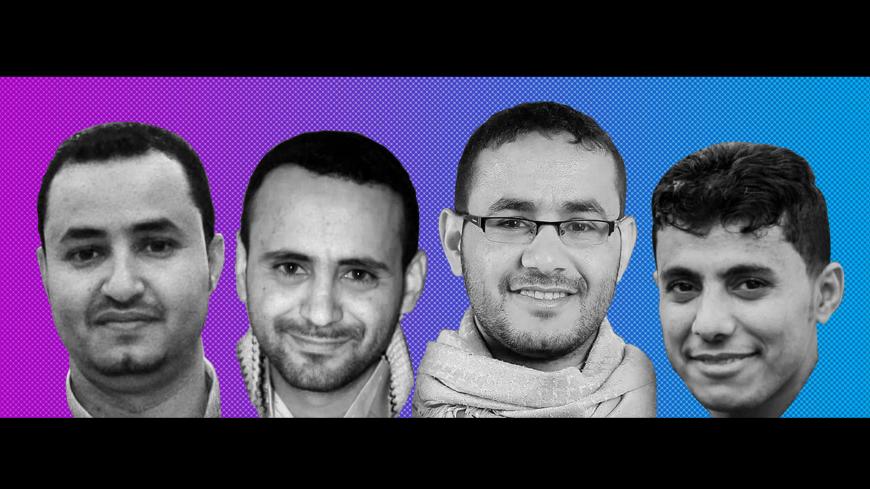 Four Yemeni journalists who have been sentenced to death by a court in Saana, Yemen. From left, Tawfiq al-Mansouri, Abdel Khaleq Amran, Hareth Hamid and Akram al-Walidi. - International Observatory of Human Rights/Al-Monitor

While the world is preoccupied with the coronavirus pandemic, four Yemeni journalists detained by Houthi rebels since June 2015 face execution.

On April 11, the Houthi-run Specialized Criminal Court sentenced the four journalists to death on charges of spying for the Saudi-led coalition that backs the internationally recognized government of President Abed Rabbo Mansour Hadi. The same court convicted on the same charge six other journalists who were released but ordered to remain under police surveillance for three years.

The 10 journalists worked for media outlets classified by the Houthis as close to the Reform Party (Al-Islah), the political arm of the Muslim Brotherhood in Yemen. Al-Islah had declared its support for the UN-backed Hadi government and approved the intervention of the Saudi-led Arab coalition in Yemen.

In an April 11 statement, the Yemeni Journalists Syndicate condemned the death sentences as unjust and called for their reversal. The same position was expressed by the Federation of Arab Journalists, Reporters Without Borders, and other press unions and journalists at the regional and international levels. They all decried the rulings as arbitrary and squelching freedom of opinion and expression.

The International Federation of Journalists (IFJ) also called for the release of the journalists, denouncing the rulings as breaching international law. It warned of legally prosecuting “those responsible for these criminal acts against journalists.”

The IFJ had joined the Yemeni Journalists Syndicate in writing a letter to UN Secretary-General Antonio Guterres, urging him to support actions to protect journalists' lives and demand the release of all journalists imprisoned in Yemen.

In turn, the French Journalists Syndicate, the National Union of French Journalists and the French Democratic Confederation of Labor issued a joint statement April 16 indicating they had contacted Guterres, UN High Commissioner for Human Rights Michelle Bachelet and the 27 leaders of the European Union, asking them to intervene on the journalists' behalf. They described the death sentence as shocking, unimaginable and a flagrant violation of human rights.

In what appeared to be a response from the Houthis to widespread local and international denunciations, the pro-Houthi Saba news agency published April 15 the alleged confessions of the 10 journalists, “revealing their destructive role serving the aggression forces" of the Saudi-led coalition.

Many observers say the international community is acting a bit late, but they also believe it can stop the executions if it keeps up its condemnations.

For its part, the Ministry of Information of Hadi's government also strongly condemned the Houthi decision, which came despite “efforts made by the United Nations team to achieve a prisoner swap deal between the government and the rebels,” it said in an April 11 statement.

Moreover, the death sentences of the four journalists came as a shock since the ruling preceded the order to release Hamid Haidara, a member of the Baha'i religious minority community. Haidara was sentenced to death in January for allegedly collaborating with Israel. After an appeals court upheld that sentence March 22, Mahdi al-Mashat, president of the Houthi Supreme Political Council, recommended March 25 that Haidara be pardoned and said all other Baha’i “political prisoners” would be released. It was unclear why Haidara was pardoned, though politics, heavy lobbying by Amnesty International and other organizations, and the coronavirus pandemic are thought to have played roles.

Defense lawyer Abdul Majeed Sabra identified the four journalists to be executed as Abdel-Khaleq Amran, Akram al-Walidi, Hareth Hamid and Tawfiq al-Mansouri. He said they were kidnapped by Houthis in 2015.

This is not the first time Houthi courts have levied the death penalty against journalists. The Specialized Criminal Court in Sanaa issued a death sentence in April 2017 against journalist Yahya Abdel-Raqib al-Jubeihi on charges of collaborating with foreign countries. He was released that September after a wave of local and international condemnation and following the deterioration of his health.

Nabil al-Osaidi, head of the Freedom Committee at the Yemeni Journalists Syndicate, told Al-Monitor, “The syndicate does not recognize the Specialized Criminal Court or its rulings since it lacks the competence to rule on journalists’ cases and commits crimes against them.”

Osaidi pointed out that 35 journalists have been killed while covering the Yemen war over the past five years: “Seventeen were killed by the Saudi-led coalition's shelling, and 18 by direct sniper fire or mine explosions."

Speaking to Al-Monitor, Sabra — the defense lawyer for the journalists sentenced this month — lashed out at the “unfair ruling contrary to the provisions of the Yemeni Constitution and law.” He argued that journalists are supposed to be referred to the press and publications prosecutor and court if they are charged and not to the Specialized Criminal Court.

Sabra indicated the trial was conducted in only four hearings and did not meet the principles of a fair trial. “Most [hearings] were held without the knowledge of the defense attorney team. When the team was present at the second hearing, it was not allowed to plead. The judge even expelled [the attorneys] from the courtroom," he said.

Al-Monitor contacted more than one official in the Houthi government, but they refused to comment on this issue.

According to the head of the Yemeni Organization for the Defense of Rights and Freedoms, Huda al-Sarari, “The court’s procedures are contrary to the provisions of the Code of Criminal Procedure and are marred by many faults." She explained to Al-Monitor that the Yemeni journalists did not get an appropriate legal defense, and the dates of their hearings were not announced.

Meanwhile, journalist and human rights activist Hind al-Eryani believes Yemen is an especially dangerous country for journalists. She told Al-Monitor, “No opinion is accepted other than that of the ruling authority. But sentencing four journalists to death by the [Specialized] Criminal Court in Sanaa is outrageous.”

Reporters Without Borders ranked Yemen No. 167 out of 180 countries in its 2020 World Press Freedom Index.