At the end of March, Houthi leaders ordered the release of all Baha'is currently detained in Yemeni prisons, including their leader, but there have been no signs of progress in that direction in the ensuing weeks. 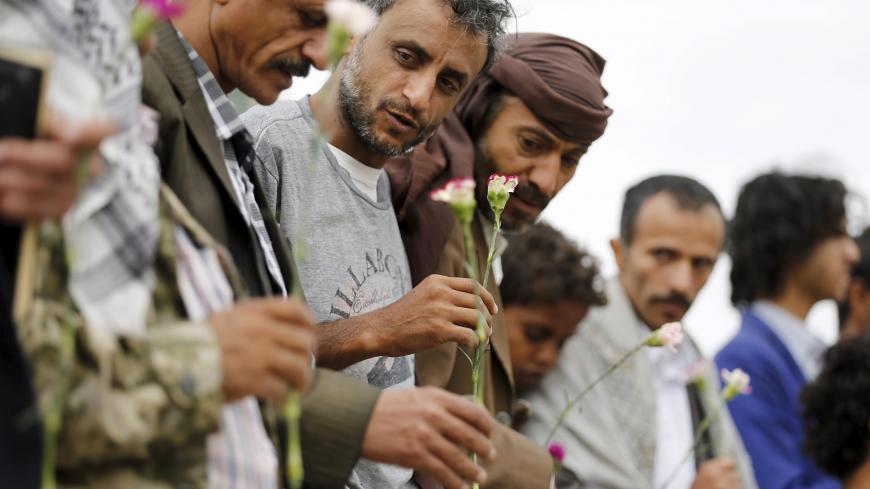 Members of the Baha'i faith hold flowers as they demonstrate outside a state security court during a hearing in the case of a fellow Baha'i man charged with seeking to establish a base for the community in Yemen, Sanaa, April 3, 2016. - REUTERS/Khaled Abdullah

SANAA, Yemen — In a surprise move, the leadership of the Houthi movement ordered the release of all detained members of the Baha'i religious minority in Yemen on March 25 and pardoned their leader, Hamed bin Haydara, who had been sentenced to death.

“We order the release of all Baha'i prisoners and announce the pardon and release of Hamed bin Haydara,” Mehdi al-Mashat, head of the Houthi-led Supreme Political Council (SPC), said in a televised speech marking the fifth anniversary of the Yemeni war that broke out March 26, 2015. “The concerned authorities should put all that into effect.”

The National Security Bureau under the government of Abed Rabbo Mansour Hadi had arrested Haydara Dec. 3, 2013, and held him in Sanaa on charges of being a “destroyer of Islam and religion.” In October 2014, after Houthi rebels captured Sanaa, he was transferred to the Central Prison, under the jurisdiction of the Prosecution Service.

On Jan. 8, 2015, officials announced the charges against him, including apostasy, using a false name (accusing him of being Iranian), converting areas of Yemen into a Baha'i homeland and collaborating with Israel. In 2017, the Sanaa-based Mwatana Organization for Human Rights and Amnesty International demanded Haydara's release in a joint statement. He was found guilty in January 2018, and a Houthi court had on March 22 upheld the death penalty against him.

In 2010, the US Central Intelligence Agency estimated Yemen's population to be almost 99.1% Muslim and the remaining 0.9% consisting of Jews, Baha’is, Hindus and Christians, many of them refugees or temporary foreign residents. According to the Baha’i International Community (BIC), which represents Baha’i worldwide, Yemen’s Baha’is have constantly suffered persecution at the hands of the authorities in Sanaa, who subject them to arbitrary arrest and imprisonment.

The BIC praised the order to free detained Baha’is and called for its “immediate implementation.” On March 23, Amnesty International had urged Houthi authorities to overturn Haydara’s death sentence and release him immediately and unconditionally, asserting that he was being persecuted for his beliefs.

Hind al-Eryani, a journalist and Yemeni human rights activist based in Sweden, told Al-Monitor, “The Houthis did the right thing to order their release.” Noting that the Houthis are themselves a minority, she asserted that minorities who hold power should not treat other minorities the way the Baha’is have been treated.

Eryani said that she had learned about the Baha’is and the treatment of them in 2000, after which she began to campaign for their release. She believes it is important to support what diversity there is in Yemen.

Osama al-Fakih, director of media, communications and advocacy at Mwatana, said he isn't entirely sure why the SPC issued its order. “What I believe is that this decision is a result of accumulative efforts by all human rights organizations,” he told Al-Monitor. “But also it might involve some political factors that I'm not aware of.”

According to the BIC, six of the Baha’is being held have been in prison for several years for their religious beliefs. The community said in a March 25 statement, “Today’s order must lead to the lifting of the 2018 charges against a group of over 20 Baha’is.”

Fakih welcomed the Houthi's action and said that in addition to the Baha'is, all other arbitrarily detained prisoners as well as those forcibly disappeared should be immediately released to reduce the threat of a coronavirus outbreak inside prisons even though Yemen has yet to confirm a case of COVID-19.

“The general conditions inside detention centers in Yemen are not really good,” he stressed. “[They] lack basic services. It would be catastrophic if [the novel coronavirus] spreads in detention centers.”

“Approximately five visits were made to Haydara [by Mwatana representatives] in 2016 and 2018 while he was in Central Prison,” Fakih said. “On July 27, 2018, he was transferred to the health center inside the Central Prison.”

Fakih further remarked that someone from his organization last visited Haydara in late 2018 or early 2019 and that the last attempt, made a month ago, had ended unsuccessfully. They were denied access on the grounds that the prison director was not there to issue them an entry permit.

Attempts by Al-Monitor to interview Haydara also ended unsuccessfully, with authorities and guards citing a number of reasons, including coronavirus restrictions and the need to obtain permits. In the meantime, BIC and other Baha’i representatives appear to be limiting public comments until further movement on the releases.

Diane Alai, the Baha’i International Community’s representative to the United Nations, declined to speak with Al-Monitor, but on April 1, tweeted, “One week since Mahdi Al-Mashat (Supreme Political Council) announced a pardon for Hamed bin Haydara & unconditional release of all #Bahai-s in prison in #Yemen. They are all still incarcerated. When will the order be implemented? #YemeniBahais.”

What the Baha’is will face once they are released is anyone's guess. Eryani remarked that only with peace and a stable state will Yemenis be able to exercise freedom of religion and speech and enjoy human rights.

“The situation now is not helping the vulnerable groups, and I am talking about Yemen as a whole, not just Houthi-controlled areas,” Eryani said. Yemen's civil war grinds on with fighting between Houthi and Hadi forces and their assorted allies, so the Baha’i, and others, remain without reliable protections.

Fakih wonders whether the Baha’is, after their release, will be allowed to remain in Sanaa and to practice their faith openly or be forced into exile. “We believe they should practice their beliefs freely, whoever they are,” he said. “[It] is going to depend on the behavior of the warring parties, whether they really do respect human rights and believe in their people. It's up to them.”