President Donald Trump’s envoy for international religious freedom welcomed the release of some Baha’i political prisoners by Iran and by Yemen’s Houthi rebels while also noting concerns about Iran's treatment of the religious group. 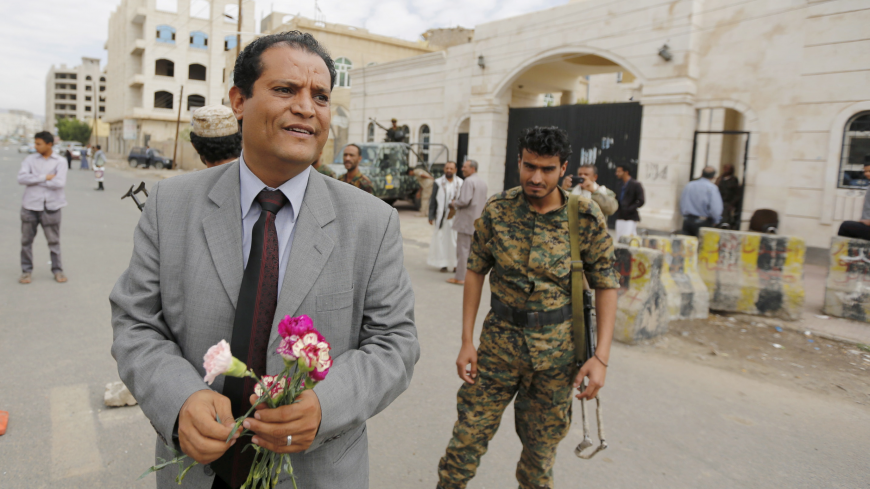 Abdullah al-Olufi, the spokesperson for the Baha'i community in Yemen, holds flowers as he stands outside a state security court during a hearing in the case of a Baha'i man charged with seeking to establish a base for the community in Yemen, in the country's capital, Sanaa, April 3, 2016. - REUTERS/Khaled Abdullah

But the United States Commission on International Religious Freedom subsequently told Al-Monitor that the Houthis have yet to release any Baha’i prisoners despite their promises to do so.

Why it matters: Iran has a long history of harsh discrimination against the Baha’i faith, a minority religion that originated in 19th-century Persia. Tehran released some 20 Baha’is last month as part of a furlough to depopulate the overcrowded Iranian prison system as the coronavirus sweeps through the country. Although Iran has released more than 50,000 prisoners on furlough, an estimated 50 to 100 Baha’is still remain in jail.

“Because of the general prison conditions in Iran, we are extremely concerned about the remaining prisoners,” Baha’i international community chief representative Bani Dugal told VOA Persian last month.  “We don’t know whether any of them have contracted the virus, because those details are hard to ascertain. But I’m sure they are vulnerable.”

Additionally, Yemen’s Iran-backed Houthi rebels said they would release all Baha’i prisoners in March while pardoning Hamed bin Haydara, who had received a death sentence that the Baha’i community had condemned as religiously motivated.

What’s next: Iran also released jailed US citizen Michael White as part of its COVID-19 furloughs — though other American prisoners remain in Iranian prisons. Iran has raised the prospect of a prisoner swap for Sirous Asgari, an Iranian who contracted COVID-19 in an Immigration and Customs Enforcement detention facility he has been held in despite his acquittal on sanctions evasion last year.

Know more: Iran and the Houthis may be particularly heavy-handed when cracking down on the Baha’i faith, but the small community also faces discrimination throughout the broader region. Mohammad Ersan details the Baha’i struggle for civil rights in Jordan.

Update: May 20, 2020. This article was updated to note that the United States Commission on International Religious Freedom has said no Baha'i prisoners have yet to be released by the Houthis.