Al-Jeddawi archaeological agency in the Egyptian city of Esna was revived after 300 years of neglect, following two years of restoration works in cooperation with USAID. 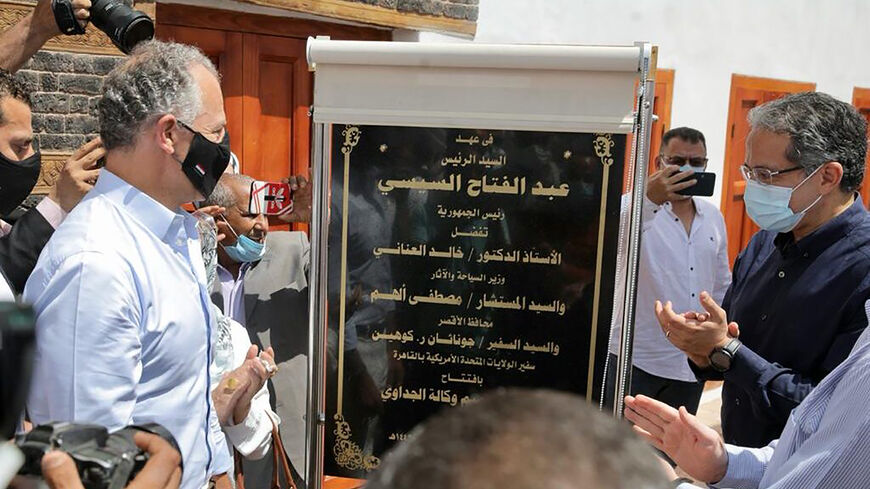 After suffering 300 years of neglect, Al-Jeddawi archaeological agency, built in 1792 in the Egyptian city of Esna, has returned to life after its recent restoration and development.

Egyptian Minister of Tourism and Antiquities Khaled al-Anani inaugurated Aug. 29 Al-Jeddawi archaeological agency in Esna after completing its restoration with funding from the United States Agency for International Development (USAID).

He said the restoration process restored the facility’s charm and highlighted the role played by the ministry in preserving Egypt’s archaeological and cultural heritage while developing the city’s tourism potential.

The ministry, he noted, has revived and opened new tourist attractions and placed Esna on the tourism map, while raising tourism and archaeological awareness and creating new job opportunities for the people of Esna.

Anani added that the ministry is not only focusing on archaeology, but also on the residents of Esna.

He said that this is not the first time that USAID participates with the ministry in restoration and development projects in archaeological sites, as it has previously carried out such projects in Luxor, Aswan, Karnak, Giza, Historic Cairo and Alexandria.

Anani announced that in order to boost tourism, the entrance to Al-Jeddawi archaeological agency will be free of charge, as is the case at the Temple of Esna.

At the end of the tour, he thanked all the partners involved in this project. He also thanked the team of Egyptian engineers, archaeologists and restorers for the great efforts they put into this project.

Mostafa Waziri, secretary-general of the Supreme Council of Antiquities, told Al-Monitor over the phone that the agency consists of two floors and two red brick buildings. On the ground floor there are a number of shops, while the upper floor was used to house visiting merchants.

The second floor can be accessed via two staircases, one on the northern side and another on the western and northeastern side.

The main facade of the agency overlooks the famous Temple of Esna dedicated to the ancient deity Khnum.

The restoration work took about two years, during which the foundations, columns, walls, roofs and wooden ceilings of the agency were restored and internal flooring works were carried out. The soil was also replaced, and wooden elements such as doors and windows reinstated. The facade was restored and a lighting system was installed.

Waziri stressed that Al-Jeddawi development project aims to preserve the cultural heritage of Esna. He praised “the fruitful cooperation with the United States in the field of tourism and antiquities, as several American archaeological missions are working in Egypt in the field of archaeological excavation and restoration, including the Chicago House Research Institute in Luxor and the American Research Center in Cairo.”

Waziri noted, “This is not the first time that USAID cooperates with the ministry to implement restoration and development projects in archaeological sites, as it has previously carried out such projects in Luxor, Aswan, Karnak, Giza, Historic Cairo and Alexandria.”

The United States is working with the Egyptian government and local entities in Esna on renovating heritage sites in Esna, including the old oil mill and the Qaisariya market. The US government, through USAID, is investing approximately $8.6 million to revitalize cultural tourism in Esna, in partnership with the Egyptian Ministry of Tourism and Antiquities, the Ministry of International Cooperation and Luxor governorate, according to a statement from the US Embassy in Cairo.

US Ambassador to Egypt Jonathan Cohen visited US government-funded cultural heritage sites and met with local officials, program partners and alumni of US exchange programs in Sohag and Luxor governorates on Aug. 28-29.

Cohen said, “This has been a productive visit to Upper Egypt — from the Red and White Monasteries in Sohag, and the Temple of Seti I at Abydos, to the town of Esna and the sites of Luxor. Egypt’s cultural heritage is truly incredible, as is the tremendous hospitality of the Egyptian people.”

Following the inauguration of Al-Jeddawi archaeological agency, which was attended by Cohen and Anani, the US ambassador met with alumni of US government-sponsored exchange programs.

Asked about the history of Al-Jeddawi agency, Nasr Salama, former undersecretary of the Ministry of Antiquities in Aswan, told Al-Monitor that the ancient trade movement stopped in Al-Jeddawi shortly after the establishment of the agency in 1792, since trade centers began to change across Egypt.

He explained that the agency building suffered extensive damage in the past as its internal parts collapsed, which prompted the Ministry of Antiquities to launch its restoration in 2018.

He said, “The agency was established by Prince Hassan al-Jeddawi in 1792. The latter was called ‘al-Jeddawi’ because he took over the Emirate of Jeddah during the reign of Ali the Great in 1184 hijra year. He had strong commercial relations with Upper Egypt. He established the agency facing the Temple of Esna as an economic hub, as this facility played a role in the trade of spices and goods that came from Yemen.”

Salama noted, “This is the only integrated agency from the Ottoman era that is built of burnt mud bricks and designed in harmony with the style of Arabian Peninsula buildings.”

He concluded by saying that this agency played an important economic role in the incoming trade from Yemen, Somalia and South Africa.