The Ministry of Antiquities and an urban development company, with US funding, are advancing a major project to revive tourism in the city of Esna in Luxor governorate, by not only promoting its ancient heritage but also by implicating the locals. 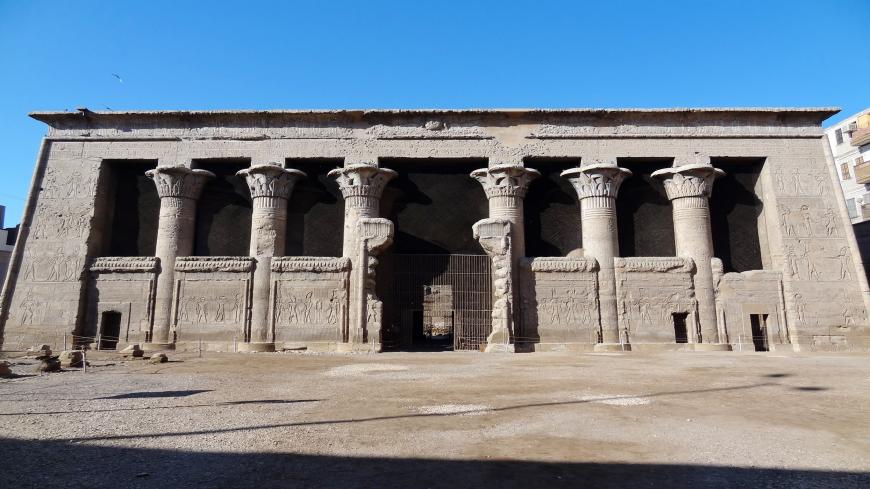 The city of Esna, located on the banks of the Nile River just 60 kilometers (37 miles) to the south of Luxor, is undergoing an ambitious project to document and preserve some of its key heritage sites. The work aims to reposition the city as an important cultural destination on Egypt’s tourist map and pave the way for its economic development and sustainable revitalization.

Rediscovering Esna’s Culture Heritage Assets (RECHA) project is being implemented by the urban development company Takween along with the Ministry of Antiquities and Luxor governorate, and is funded by the US Agency for International Development (USAID). The program started in 2016, but has been presented to the public this year and its first tourist promotion video was released Sept. 28, on World Tourism Day.

“It is a project where we are trying to test a model to see [how] provincial cities like Esna can capitalize on their cultural assets, both tangible and intangible. And how these can become an agent for economic development in the city,” Kareem Ibrahim, CEO and co-founder of Takween and RECHA’s project director, told Al-Monitor.

The history of Esna dates back to the Pharaonic era, when it stood as the capital of one of Egypt’s regions at the time. The city remained important for over 2,000 years as a hub of trade and commerce that left behind assets and wealth of the Pharaonic, Greco-Roman, Coptic, Islamic and modern eras. Its prominence, however, started to fade at the beginning of the 20th century with the rise of Luxor as a major tourist destination in the country, in a process that eventually led to its gradual deterioration before being forgotten.

Today, Esna stands as a frequent stop for Nile cruises given that its city center is home to the Temple of Esna, dedicated to the ancient deity Khnum. Its construction began during the 18th Dynasty of Egypt and was completed during the Ptolemaic and Roman period. Esna is also famous for its barrage bridges, including the now-obsolete one built in 1906 by the British and the modern Electricity Bridge from the 1990s.

Yet Ibrahim said that the current tourism model has a very limited impact on local residents, given the little interaction between them and tourists. To change this dynamic, RECHA has been primarily devised as an urban development project that initially focuses on locals rather than on tourists. This way, the project aims to first integrate residents, improve their living conditions and bring economic benefits for them, and with the intention that this will ultimately make it appealing for tourists as well.

“The problem is that in Egypt you have large numbers of tourists and revenues, but what really stays with the local communities is minimal,” Ibrahim said. “In places like Esna tourists go to the temple, buy a ticket and leave, so whether you have 40,000 or 1 million visitors a year, it does not really matter. We are trying to change that.”

The most important building that the project has aimed to preserve is the 18th century Wakalat al-Jiddawi, a two-story building that used to work as a caravanserai and stands today as a witness and representative of Esna’s commercial importance and its thriving economic life in the 18th and the 19th centuries. The building, listed as a monument in the 1950s but never properly restored, is located in the intersection of the city that overlooks the street of the bazar and the Khnum Temple. It can become a tourist and social center.

RECHA has also restored facades of about 10 other significant buildings, which are not listed as monuments, in an attempt to draw the attention of locals, government officials and visitors alike.

Finally, the project has also restored parts of Al-Qasareya Street, which is a typical, mostly covered street that runs from north to south and holds most of the city’s economic activity. Before the intervention, more than half of the more than 110 shops in Al-Qasareya — which is famous for its fabrics, sewing tools and tailor shops — remained closed. But Ibrahim said that people are starting to reinvest and visit the area again.

“The market [before the renovation] was not very busy and most customers were afraid to come because the street was not paved, the market was not well lit and its wooden ceiling was [about] to fall,” said Adel al-Ansari, the owner of a clothing store located on Al-Qasareya who renovated his shop at the same time when the area was restored. “After the restoration the situation became different and safer. [Now] it is much better. There is a boom, which will encourage more people to work and open shops that were closed,” Ansari told Al-Monitor, explaining that he himself is planning to expand his shop and buy another one.

Other hidden gems from Esna that RECHA aims to capitalize on are the city’s corniche, where its old barrage and some of its most notable historical buildings and palaces stand, as well as the city center, home to several other significant buildings and street vendors. Another remarkable site in the area is the only oil press that still remains in Esna from the more than 30 presses that used to work in the city over the past two centuries.

“The importance of the project lies in the preservation of the remaining architectural heritage [of the city],” Ahmed Hassan, head of the Esna and Armant areas at the Ministry of Tourism and Antiquities, told Al-Monitor. “The second goal is to make tourist visits longer; instead of tourists just visiting the temple [encourage them] to visit other buildings that are being restored around the city.”

The project is working on management plans to define the future use of the different sites that have been preserved, and it is also developing a tourist map of the city for marketing and promotional purposes. RECHA has received funding to keep working until 2024.

“Before we got involved it was only the temple that was known. There was nothing else,” Ibrahim said. “What we are trying to do is to show that the city has a lot to offer, just like many other cities in Egypt.”

He added, “If given the right care and attention, Esna can become a multidestination site, rather than a single destination one."

As part of its efforts to preserve and foster Esna’s intangible activities in order to maintain its local environment, RECHA is also conducting different workshops to build the human capacity of locals. These put a special emphasis on tourism and on the skills of craftsmen. They have already encouraged partnerships between the city administration, businessmen from the area and locals.

“During [one of] these workshops we conducted field visits; we were trained as tourist guides and on how to deal with different age groups to deliver information in a suitable manner,” said Rehab Mukhtar Abdel Haris, a graduate of Egyptian archaeology at South Valley University who participated in a workshop and has already led several school trips on guided tours within Esna. She told Al-Monitor that the handicraft workshops devoted to housewives and girls who have not completed their studies are also “very useful” given that “they can practice these crafts at home” and sell them.

“It is a 360-degree program,” Ibrahim said. “We are focusing on physical, marketing and economic components, and on the human capital, to give a boost to the city.”