An Egyptian archaeological mission in southern Egypt found coins dating back to the Islamic era, while experts believe a mint shop was there. 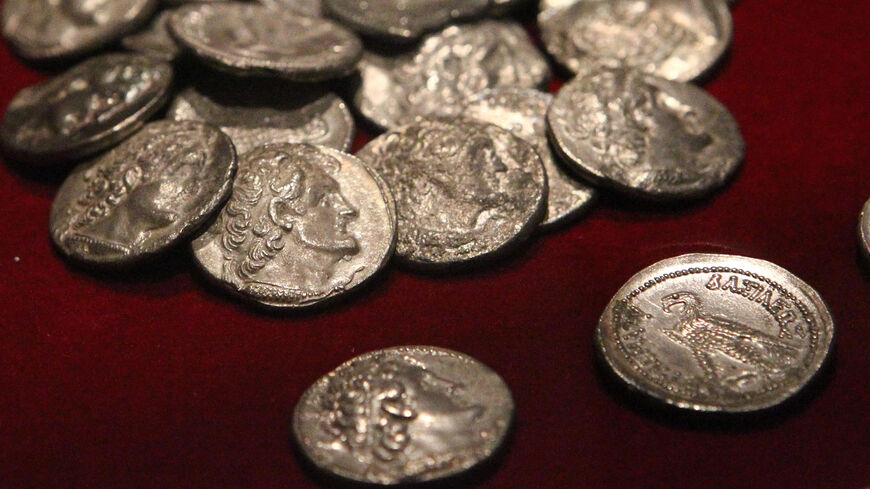 Coins are displayed at the exhibition "Coins through the Ages" at the Egyptian Museum in Cairo, Egypt, Aug. 10, 2010. - Khaled Desouki/AFP via Getty Images

CAIRO — The Egyptian archaeological mission of the Supreme Council of Antiquities operating in the city of Esna in Upper Egypt has recently discovered a cache containing coins from different historical decades of the Islamic era, in addition to parts of molds to mint and weigh coins.

In a Sept. 11 statement published by the Ministry of Tourism and Antiquities on its Facebook page, Secretary-General of the Supreme Council of Antiquities Mostafa Waziri said that this discovery may indicate the existence of a mint and weighing house in the city of Esna.

He noted that the archaeological mission will work on uncovering this house in the coming period.

The head of the Central Administration of Antiquities in Upper Egypt at the Ministry of Tourism and Antiquities, Mohamed Abdel Badie, said in the same ministry statement, “The archaeological mission began its work on the site last year in the part located directly behind the Temple of Esna, until it found this huge number of coins, which included a gold coin dating back to the era of Al-Aziz Billah Bin Al-Mu’izz Li Din Allah Al-Fatimi [a Fatimid ruler], and 286 silver coins dating from the reign of 19 different kings and sultans of the Mamluk era during different historical periods.”

He continued, “A foreign currency dating back to the days of King Leon II, King of Armenia, who lived during the Mamluk era, was also uncovered, as well as bronze and copper coins from the Ottoman era.”

Fathi Yassin, director general of Antiquities of Upper Egypt, explained in the same statement that among the coins discovered recently was a Fatimid gold dinar that dates back to the era of Al-Aziz Billah, a dirham of Najm al-Din Aibak and another made of silver of the just King Badr al-Din Solamish.

The collection also included a commemorative dirham on the occasion of the coronation of King Typhon II, and a set of bronze and copper coins from the Ottoman era, according to Yassin.

Muhammad Hamza, professor of archaeology and Islamic civilization and former dean of the Faculty of Archaeology at Cairo University, told Al-Monitor, “The villages and cities of Upper Egypt were no less important in the Islamic era than they were in the periods of the ancient Egyptian civilization. On the contrary, they played an important role in trade and pilgrimage, which was performed at the time through the Nile from Upper Egypt to the Arabian Peninsula.”

He said, “The discovery of coins is evidence of prosperity and that this region played an important role for the trade convoys for a long time, especially since the discovered coins dated back to different eras. Upper Egypt had a major role in the Fatimid era, and many Fatimid emirates were formed there.”

Hamza added, “Finding antiquities dating back to the Islamic era is not new to Esna and Upper Egypt in general, but foreign propaganda for Pharaonic antiquities has consolidated the idea that Upper Egypt is a center for antiquities belonging to the ancient Egyptian civilization only. Discovering whether this area includes a coin mint requires more excavations and consultation of old documents that dealt with Esna.”

The city of Esna lies on the west bank of the Nile, 55 kilometers (34 miles) to the south of Luxor, and it was known by different names in the past, like Latopolis and Senat.

Abdel Rahim Rihan, member of the History and Antiquities Committee of the governmental Supreme Council of Culture, believes this archaeological discovery highlights the historical importance of the city of Esna as a commercial city in the Islamic era, especially the Mamluk and Ottoman eras.

He told Al-Monitor that trade flourished in the Mamluk era and commercial centers were established, consisting of hotel rooms for major merchants coming from Egypt or Europe to carry out various trade operations. Such commercial centers include Khan Hassan Al-Jeddawi (1207 A.H./1792), 30 meters (98 feet) north of the Temple of Esna.

Rihan noted that Esna played “a civilized role in the Fatimid era, which was evidenced by the discovery recently of a single gold coin dating back to the Fatimid era of Al-Aziz Billah Bin Al-Mu’izz Li Din Allah Al-Fatimi. Esna is also famous for Al-Omari Mosque. The mosque’s memorial plaque includes 10 lines of prominent Kufic writings stating that the mosque was founded during the era of the Fatimid Imam al-Mustansir Billah (429-487 A.H./1036-1094).”

Regarding the possibility of the existence of a coin mint in the area, Rihan said a coinage workshop dating back to the Islamic era is highly likely to be found in the area. He explained that the coinage molds during the Islamic era were pieces of glass resembling coins and were used to standardize the weight of coins.