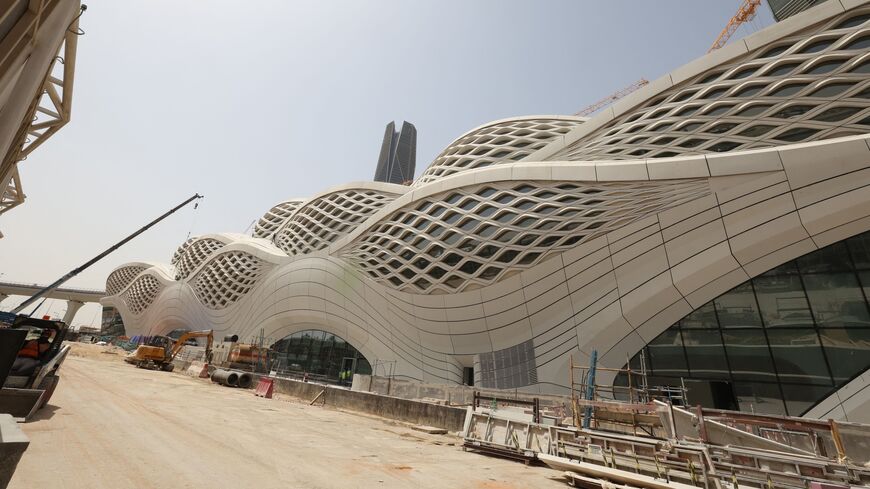 The King Abdullah Financial District station of the Riyadh Metro is seen on April 1, 2021, in the Saudi capital. Saudi Arabia is trying to provide more jobs for its citizens, a process called Saudization. - FAYEZ NURELDINE/AFP via Getty Images

Foreigners make up a very high percentage of the population of the Gulf states, reaching about 88% in Qatar and the United Arab Emirates.

However, the situation is not uniform throughout the region. In Saudi Arabia, about 21.5 million citizens make up more than 60% of the total population of some 35 million.

The public sector has been the primary employer of Saudi citizens for decades. But a paradigm shift is underway as a result of population growth and the threat of stagnation or gradual decline of oil revenues, the state’s current major source of income.

Saudi Arabia’s de facto ruler, Crown Prince Mohammed bin Salman, announced plans to jump-start labor-intensive industries and for what it termed "Saudizing" jobs in others. It aims at tackling a high unemployment rate — 11.7% in the first quarter of 2021 — by offering enticing private-sector job opportunities to more than 250,000 young Saudis who enter the workforce every year.

“The public sector in most Gulf countries has reached a saturation point,” said Talib Hashim, managing director at TBH, a Dubai-based consultancy firm specialized in Emiratization, the UAE's version of Saudization.

As part of Saudi Arabia's quest to reform its economy, the kingdom is even staking out a local-first approach to economic policy within the Gulf Cooperation Council (GCC).

In July, during the height of a rare public rift with the UAE over oil production quotas, the Gulf kingdom declared it would exclude from preferential tariff concessions imported goods made by GCC-based companies whose workforce was not 25% local.

Analysts interpreted the move as an attempt to curtail imports from the UAE, where citizens account for only a tiny fraction of private-sector workforces. The Gulf commercial hub was Saudi Arabia’s third trading partner in 2019, with $10.3 billion worth of goods imported.

The decision is “100% legal” and in the region's best interest as it will help local companies to “compete in a fair manner,” said Saudi political researcher Salman al-Ansari. “This decision is long overdue, but it is never too late to rectify the trajectory,” he told Al-Monitor, suggesting it will “encourage international companies in the GCC to employ more locals."

In the UAE, an executive with a Dubai-based family-owned conglomerate told the Financial Times, “These [conditions] are impossible to comply with: no manufacturer has that level of local manpower.” A form requiring proof of labor force composition has left businesses struggling. “This has blindsided us; the requirements are impossible,” the executive said.

“The solution is simple, UAE & Qatar can start hiring Saudis and Omanis and Bahrainis!” suggested Mohammed al-Suwayed, a Saudi asset manager, in a tweet. In Bahrain and Oman, the GCC most vulnerable economies, citizens account for about 55% of the population.

Moreover, boosting labor mobility among GCC nationals would offer diversification-hungry Gulf economies access to a broader population base to source talents and spur the emergence of specialization hubs that would spare Gulf states from competing in the same industries.

Every man for himself

But that is easier said than done. “Ideally, GCC countries would come together and look at tackling unemployment at a regional level. In reality, however, each country encourages hiring its citizens; there is no incentive for companies to hire GCC nationals,” Hashim said.

Sources in the human resources sector told Al-Monitor that although GCC citizens have the right to reside and work in any GCC state, recent recruitment figures do not signal a major surge in interest for intra-Gulf labor mobility among citizens of the six GCC countries.

From a political standpoint, “The rulers [in the GCC] at the moment would find it politically relatively imprudent to make themselves dependent on other GCC nationals,” said Frédéric Schneider, an economist and senior research associate at the University of Cambridge. Mistrust between Gulf ruling families burst into the open mid-2017 when Saudi Arabia, the UAE, Bahrain and Egypt jointly blockaded Qatar and instructed their citizens residing in the peninsular nation to return home immediately.

Also, high nationalization of GCC workforces would entail profound societal shifts that could make the current political system, hereditary monarchy, “undesirable,” Schneider said. Indeed, trading the vertical redistribution of the oil rent for income from labor and surging taxation risks pushing citizens to endorse the slogan "No taxation without representation.:

Employers also are reluctant to hire GCC nationals. They prefer to recruit lower-income laborers who predominantly come from emerging countries in Asia and Africa, or the wider Middle East, and who lack channels to denounce long working hours and widespread abuses.

Attempts to impose localization quotas on businesses are inefficient, Hashim told Al-Monitor. “That language is obsolete; it is irrelevant. What does the private sector want to see? Skilled individuals with experience who can help and bring value to the organization.”

While plans to localize workforces in the GCC shed light on the urgency to develop cost-competitive homegrown talents, Hashim acknowledged that not all jobs can be localized in the immediate future. He mentioned wages unappealing to nationals and a lack of qualifications in specialties such as construction manager or data scientist. None of the Gulf universities ranked among the world’s top 100 universities in 2021, according to the Shanghai Ranking.

Nationalization gains momentum in certain industries, however; this is the case, for example, in Saudi Arabia’s food and beverage sector, where young entrepreneurs have pushed boundaries. On the shores of the Red Sea in Jeddah, Jude Jamjoom launched Zain's Cookies in 2016 after a decade of running the family business from home with her three sisters and her mother.

“It was a family dream to operate a bakery together!” Jamjoom said.

Yet launching one of Jeddah’s first local bakeries was socially challenging. Jamjoom, who studied law, faced hurtful comments such as asking whether her life ambition was to become a chef after graduating. “It was always said in a degrading and insulting manner as if the food and beverage industry was not a prestigious one," the entrepreneur told Al-Monitor.

“Perception is very powerful,” said Hashim. “Sometimes the society's perception of the work or the company, family and peer influence would dissuade one from taking the role.” A study showed that 72% of young Saudis turn to family and friends for career advice.

But a change in attitude is noticeable among GCC nationals whose appetite for private-sector jobs and global exposure rise as economic realities weigh on the attractiveness of public sectors. Jamjoom rejoiced that it is becoming “culturally more acceptable” for Saudis to enter economic sectors and niche professions once deemed undesirable, saying, “It is heartwarming!”