Tax-free incomes offered to migrant workers who play a decisive role in developing Gulf economies are regarded as compensation for no formal route to citizenship or social security. 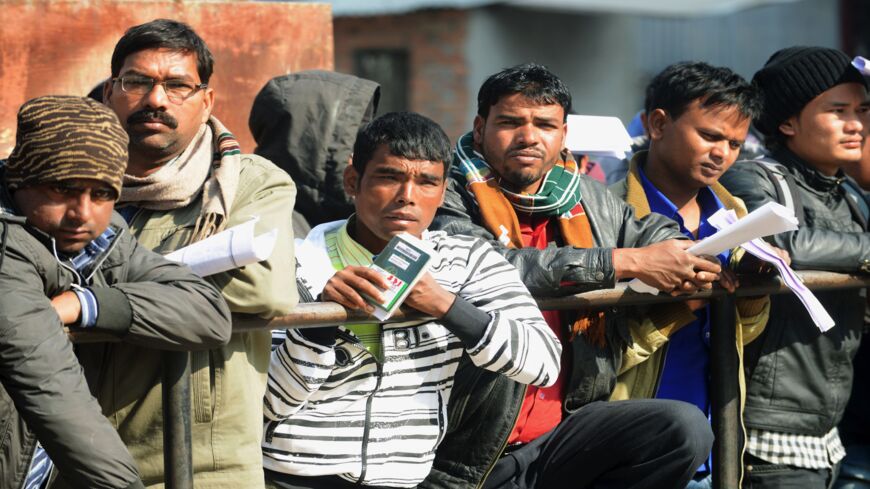 Nepalese migrant workers queue to receive official documents in order to leave Nepal from the Labor Department in Kathmandu on January 27, 2014. Nearly 200 Nepali migrant workers died in Qatar in 2013, figures that highlight the grim plight of laborers in the Gulf nation. - PRAKASH MATHEMA/AFP via Getty Images

Standing between two rubber trees in a village in south India, Usman Thondiyan describes with emotion the 17 years he spent making and sewing sofas in the Saudi Arabian port city of Jeddah, working about 80 hours per week for $200 to $400 a month. “I received little education, and I had no chance of getting a decently paid job in India, so I opted for migration. Money from the Gulf bought me a house and a rubber tree plantation,” the man said with pride.

The money sent home by the Gulf migrant workers — about $115 billion in 2019 — is a lifeline for millions of households across South Asia and Africa. In Nepal, for example, personal remittances account for more than a quarter of the country’s gross domestic product.

Like dozens of millions of migrant workers in the Gulf region, Thondiyan pocketed tax-free wages higher than what he could have earned in his hometown. But he had to leave Jeddah after his employment contract was terminated; he chose to return home to become a self-funded retiree. Gulf economies, structured around disposable foreign workforces, offer no formal route to citizenship, permanent residence or access to state pension schemes.

The transient lifestyle offered to migrant workers served the immediate needs of Gulf nations. Yet short-sighted migration schemes that propelled economic development might have to evolve, as the region — particularly the United Arab Emirates (UAE) — aims to emerge as a top-tier global hub bridging East and West and to attract new industries.

“Better economic opportunities in the home countries of blue-collar workers combined with (in the case of Dubai) a massive push to attract a bigger number of permanent residents requires a further sweetening of the deal,” Nicolas Dunais, managing director at the Dubai-based public policy advisory firm Azal Advisors, told Al-Monitor.

The UAE announced in January 2021 it would grant citizenship to foreign investors, specialized talents, doctors, engineers and artists nominated by UAE royals or officials. According to the Passport Index of 2021, the UAE passport is the world’s 15th strongest. Still, acquiring UAE citizenship remains reserved for few privileged individuals.

Sweetening the migration deal to reinvent Gulf economies beyond oil and gas revenues could involve offering more generous social welfare benefits. With the notable exception of nondiscriminatory vaccination campaigns — except in Kuwait, where citizens jumped the queue to get jabbed before migrant workers — foreigners are excluded from these programs.

During the COVID-19 pandemic, the discrepancy in rights between citizens and migrant workers accelerated as Gulf governments openly favored local populations. In April 2020, the government of Saudi Arabia announced it would pay 60% of wages for citizens working in the private sector, with a monthly limit of 9,000 riyals ($2,400) per person.

This uncertainty of being paid also affects end-of-service benefits, a sum of money that Gulf employers are lawfully required to pay upon employment termination. Dunais said, “Given that the end-of-service benefit is only paid at the end of one’s tenure in a company, the perspective of the latter’s insolvency represents a sword of Damocles hanging over expat workers in a context where the prospects of recovering one’s dues are limited in practice.”

Last year, 150 workers employed by a Bahraini company struggled to survive in the island nation while waiting for their end-of-service benefits and outstanding wages to be paid.

'Human rights on and off the pitch'

From a regulatory standpoint, Gulf migrant workers are still highly vulnerable to rampant abuses enable by the "kafala" system, a private sponsorship system that allows employers to exert tight control over their employees and is often likened to modern slavery.

Reforms in Qatar have largely dismantled the kafala system. Still, human rights organizations point out that greater law enforcement is needed and provisions in the law allowing employers to file absconding cases against their employees should be abolished.

As Gulf states look to be more connected than ever to the global economy and host international sporting and cultural events, the issue of violations of migrant workers' rights is increasingly viewed as a source of concern and long-term reputational risk.

A backlash against the World Cup, which is set to take place in Qatar in 2022, has intensified following the publication by The Guardian of a report revealing that more than 6,500 migrant workers have died in Qatar over the past decade. In March 2021, players from the Norwegian team wore T-shirts bearing the message “Human rights on and off the pitch.”

Though off the radar for most migrant workers in the face of more immediate concerns caused by the COVID-19 pandemic, the issue of retirement programs, including pensions, is also part of the tradeoff for a better payday in the Gulf.

In the UAE, nearly half of migrant workers either have “no plans to ensure an adequate standard of living after retirement or plan to work beyond the retirement age,” a survey conducted by global consultancy Mercer found.

Of course, the vast majority of migrant workers receive little to no access to public pension schemes in their countries of origin either, so the lack of pensions is more the rule than the exception for many workers around the world, including in the United States.

Ginu Zacharia Oommen is an Indian researcher who focuses on the South Asia-Gulf migration corridor. He told Al-Monitor, “The faith of our construction workers in the Gulf is not part of the public discourse here in India. It is a neglected community."

Private initiatives exist, however, which could set a new benchmark for some companies. The international airline Emirates has operated its Provident Fund since 1991 and tops up employees’ monthly deposits to the fund with a contribution of 12% of an employee's basic salary. Currently, only 15% of employees surveyed by Mercer in the UAE have access to a corporate pension plan, but it could become more widespread.

Dunais said that Gulf policymakers are currently considering portable social protection instruments for migrant workers in the form of mobility savings accounts, which would be linked to retirement savings schemes and financed by both employees and employers. Such instruments could well become mandatory.