While the strong dollar has played in favor of Gulf migrant workers, they are not exempt from wage increases falling behind the inflation rate. 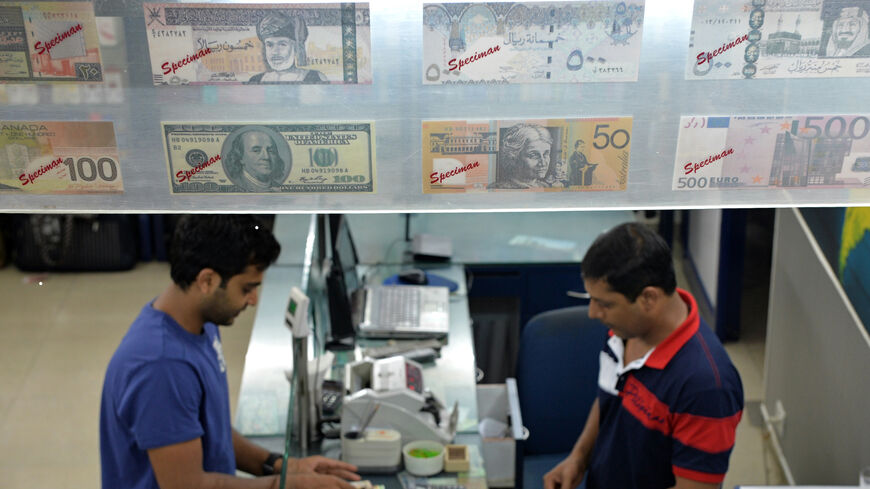 The impact of a strengthened dollar is being directly felt by Gulf migrant workers with currencies in their home countries being weakened against the greenback.

Across Asia and Africa, boosted remittances helped migrant workers buy homes and paid for school fees and living expenses to contain the impact of inflation.

“Working in the Gulf region is an advantage at this point in time. The conversion rate has improved steeply over the years to our benefit. Still, our currency depreciating is not good news for India,” Mythili Kolluru, an Indian assistant professor in Muscat, told Al-Monitor.

The Omani rial has appreciated about 60% against the Indian rupee since Kolluru first landed in the Sultanate in 2012. Except for Kuwait which pegs its dinar to a currency basket, Gulf countries have their currencies pegged to the US dollar.

Long-term investments like real estate are only the tip of the “remittances iceberg.” In 2021, 83% of cross-border payment users in the United Arab Emirates (UAE) sent money to support family or friends at home, where inflation eats away at purchasing power. In labor exporter Bangladesh, the inflation rate hit 9.5% in August, the highest in over a decade.

“The strong dollar benefited me this year, but only in appearance. Rising inflation in Tunisia has eaten up the ‘conversion gains,’” said Fekher Frioui, a Tunisian school teacher in Oman. The Omani rial has appreciated more than 20% against the Tunisian dinar since January 2021, but Tunisia's inflation reached 9.1% in September, relative to the same period last year.

“I usually send money home every month, but it is even more crucial now as inflation shrinks families’ buying power in Tunisia,” Frioui told Al-Monitor. The currency opportunity shields families of Gulf migrant workers from inflation while others struggle to stay afloat. The Tunisian government and a labor union agreed in September 2022 to lift wages for state employees by 3.5% a year from 2022-25, but that is about three times less than inflation.

Gulf migrant workers are not exempt though from wage increases falling behind the inflation rate. “We used to send about 10% of our earnings at home, but we have not had a salary increase since the start of the pandemic, so we send a little bit less home,” Kolluru said.

In Sri Lanka, the appeal of US dollar-pegged wages has increased in the midst of an economic meltdown and currency devaluation in the country. Anindha Weerasinghe is a vegetable farmer in Nuwara Eliya, a city in the hill area of central Sri Lanka. Struggling to make ends meet since 2021, he decided to migrate and get a job in the UAE’s farming industry.

“My daughter is a medical student, and my son will soon enter university; I have to do something for them. I need an income in a stable currency, unlike our Sri Lankan rupee,” Nuwara told Al-Monitor.

Gulf currencies are also appealing for those in countries that are not on the brink of economic collapse. “My friends in London are willing to move to the Gulf to benefit from strong currencies and an income tax-free environment,” said Naila Razi, a UK-based Indian who grew up in Saudi Arabia where her father has worked since 1999.

Oman passed a draft law in November 2022 to introduce an income tax on high earners, but other Gulf states are unlikely to follow suit in the short term.

The dollar-pegged wages pull factor aligns with a broader UAE-led push by Gulf states to bring on board highly educated global talents thought to be needed to develop local non-oil economies. The strategy also aims at capturing a bigger slice of the world’s wealth cake — the UAE is expected to attract the highest inflow of high-net-worth individuals globally in 2022.

The golden visa scheme is an alternative to Gulf states’ rigid migration policies synonymous with transience that forces aging migrant workers to leave a region they feel socially and emotionally attached to or to find alternative ways to stick around. The adage “cashing in on a well-paid job and leave” has deterred migrant workers from investing savings in the Gulf.

“In the Gulf, you never get citizenship, even if you live there forever. My family has lived in Saudi Arabia for more than 24 years, but my dad’s residential status is still tied to his job. We do not have long-term investments in the Gulf because there is no stability there,” Razi said.

The strong dollar also upsets Gulf states’ plans to retain a greater share of migrant workers’ wealth, especially in Dubai, where property ownership is widely open to foreigners in dozens of areas. Investing Gulf wages abroad in assets denominated in depressed currencies, such as real estate, has regained its attractiveness in 2022, compounding the issue of economic leakages that is a direct result of rigid migration policies and high dependence on imports.

Fear at a heightened scale

Acquisition of citizenship in the six GCC countries is virtually out of reach for migrant workers except for rare instances. In 2021, the UAE said that foreigners nominated by federal entities would be eligible for Emirati nationality for the first time.

Gulf states’ push to nationalize middle-skill jobs and tackle citizen unemployment — Oman banned hiring non-Omanis for 207 professions in July 2022 — has exacerbated a sense of instability among migrant workers. “Talks about nationalization have been here for decades, but it is now happening in an accelerated way, and the fear is at a heightened scale. It is not very comfortable working in an environment where you are always insecure,” Kolluru said.

But risks of labor abuses often take a back seat as flows of dollar-pegged wages sustain communities across Asia and Africa. Remittances to India are projected to grow by 12% in 2022 to cross the $100 billion mark.

Still, the historic figure hides a grim long-term reality for Gulf attractiveness. India witnesses a “gradual structural shift” away from largely low-skilled employment in the Gulf, the World Bank wrote in its November report. Between 2016-17 and 2020-21, the contribution of Saudi Arabia, the UAE, Kuwait, Oman and Qatar remittances to India’s total inflows halved to 28%, while remittances from the United States, the UK and Singapore increased.