Anouar Maarouf, the former communications and technology minister, was reportedly informed by Tunisian authorities that he has been placed under house arrest. 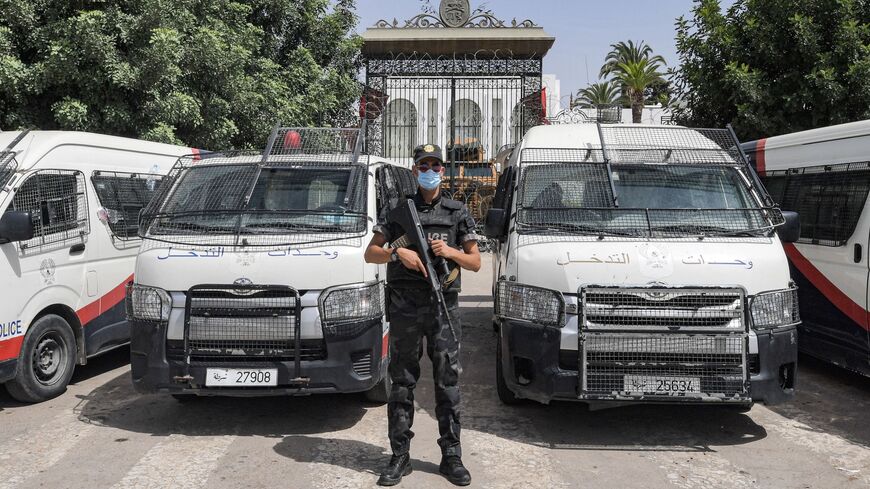 A member of Tunisia's security forces stands guard outside the parliament in Tunis on July 31, 2021. - FETHI BELAID/AFP via Getty Images

The Tunisian government has placed one of major Islamist party Ennahda’s leaders under house arrest, local media outlets reported Friday, as President Kais Saeid forges ahead with a sweeping crackdown on his critics in the North African country.

"Anouar Maarouf was informed by official authorities that he is under house arrest," an Ennahda official told Reuters.

Maarouf is the country’s former minister of communication technologies and digital economy. He’s the highest-profile figure in Ennahda to be detained since Saied suspended the parliament, sacked Prime Minister Hichem Mechichi and suspended lawmakers’ parliamentary immunity on July 25.

On Thursday, Saied rejected calls for dialogue and said there was "no turning back" from what Ennahda and other critics have branded a “coup.” He dismissed three governors from their positions on Thursday, the latest in a series of firings of high-ranking government officials that include the ambassador to the United States.

Ennahda, which is parliament's biggest party, is one of several political factions under investigation by the judiciary for allegedly using foreign funds for electoral campaigns. Four members of Ennahda were briefly under investigation for “attempted violence” on July 26, but their cases were dismissed.

Earlier this week, Ennahdha denied reports that its leader, Parliament speaker Rachid Ghannouchi, had been placed under house arrest. Last Friday, Tunisian authorities arrested a member of parliament’s Amal Movement, Yassine Ayari, at his home after he accused Saied on Facebook of carrying out an unconstitutional power grab.

Saied, a former constitutional law professor, denies a coup is underway. He has cited Article 80 of Tunisia’s constitution, which allows for the freezing of parliament in the case of "imminent danger.” The emergency authorities Saied invoked last for 30 days, after which parliament would need to grant him an extension.

The United States, meanwhile, has urged the Tunisian president to “return to the democratic path” and form a new government. In a joint statement on Thursday, US Senate Foreign Relations Committee Chairman Bob Menendez and ranking member Jim Risch said they were deeply concerned by the growing tension and instability.

"President Saied must recommit to the democratic principles that underpin US-Tunisia relations, and the military must observe its role in a constitutional democracy," the senators said.