Former Iraqi interpreters already hunted because of their faith say the rush to rescue wartime allies from Taliban-run Afghanistan should serve as a cautionary tale. 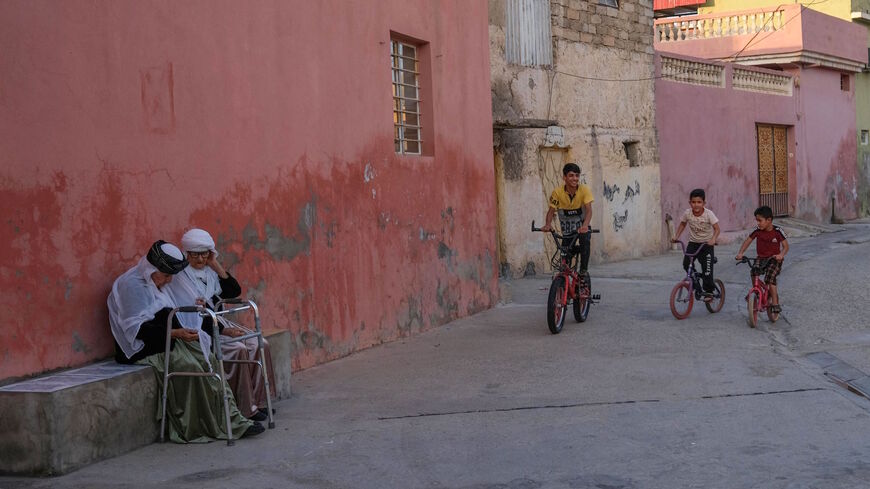 Yazidi-Iraqi children ride bicycles as elderly women sit on a ramp in the town of Sheikhan, northeast of Mosul, on July 15, 2021. - SAFIN HAMED/AFP via Getty Images

After the hurried evacuation from Afghanistan left behind countless at-risk allies, former Yazidi interpreters who worked with the US military in Iraq are begging for special visas they say are needed to escape retribution in their home country.

Seven years after the Islamic State rampage on the Yazidi ancestral homeland of Sinjar, the radical ideology that gave rise to the bloody massacre endures. Even after IS’ territorial defeat, the Yazidis, a mostly Kurdish-speaking minority group that practices an ancient monotheistic religion, say they remain highly vulnerable to extremists who view them as devil worshippers.

Jameel Chomer, who American troops nicknamed “Jimmy,” served as an interpreter and cultural adviser at the Al-Kasik military training base in northern Iraq between 2005 and 2010. More than a decade later, Chomer worries that his US affiliation makes him even more of a target to those wishing to harm Yazidis.

“To be a Yazidi, this is doubling the risk on your life,” Chomer told Al-Monitor by phone from his home in Iraq's Sinjar region. “Being a Yazidi who worked with the US Army, this is something that really increases the risk.”

In August 2014, IS descended on the mountainous Yazidi heartland of Sinjar and carried out what the United Nations has since deemed a genocide. Yazidi men were rounded up and executed, their bodies thrown into mass graves. Thousands more women and children were abducted, forced to convert to Islam and sold into sexual slavery.

As the militants advanced on the Yazidi stronghold, Chomer and his family escaped to the northern Iraqi Kurdish city of Dohuk. Within days of the IS onslaught, Chomer applied for what's known as a Special Immigrant Visa (SIV).

Created in 2006, the SIV program allocates a limited number of visas per year to Iraqis and Afghans who served as US military translators or interpreters and who want to resettle in the United States as legal permanent residents. In 2008, Congress established a second special visa program for endangered Iraqis who worked on behalf of the United States. A month after the IS assault on Sinjar, the Iraqi SIV program stopped accepting new applicants.

Iraqis who don’t qualify for SIVs can apply for visas through the Priority 2 (P-2) program for refugees, but their prospects of resettlement are slim. Despite having reserved 4,000 slots for Iraqis who aided the United States, the Donald Trump administration admitted just 161 of them in fiscal year 2020.

President Joe Biden inherited a massive backlog of applications that as of April 2021 had grown to include more than 106,000 Iraqis. Further complicating matters, the administration temporarily paused the Iraqi P-2 program earlier this year after an investigation revealed widespread fraud.

Hadi Pir, vice president of Yazidi advocacy group Yazda, has documented at least 124 former Yazidi interpreters and their family members whose SIV or P2 applications are pending. Many of them have waited in the pipeline for years despite the immediate danger to them in Iraq.

For Pir, a former Yazidi interpreter who immigrated to Nebraska in 2012, the issue hits close to home. He personally knows of several Yazidis killed at the hands of militias and extremists due to their US association. The lives of an untold number of others have been threatened, he said.

“It was always dangerous being a Yazidi, but it became way harder for some of us after becoming interpreters,” Pir explained. “You’re not only an ‘infidel,’ but you’re an ‘agent’ of the invaders.”

Security conditions in Iraq, coupled with coronavirus slowdowns, have exacerbated what is an already time-consuming, multi-agency screening process. Along with background checks, letters of recommendation and medical examinations, SIV recipients must submit to an in-person interview conducted at a US embassy or consulate.

But following a spate of Iran-backed militia attacks, the US Embassy in Baghdad ended visa processing in January 2020. With the consulate in Erbil offering only emergency consular services, Iraqis who are invited for a visa interview must now make an appointment at an embassy in Abu Dhabi, Amman, Ankara or Doha — travel that is financially or logistically out of the question for many applicants.

The bureaucratic delays have received attention in Congress. In a June letter to Secretary of State Antony Blinken, a group of 12 Democratic lawmakers led by Rep. Andy Levin (D-Mich.) called on the administration to come up with a plan to address the mounting visa backlog and safely resume consular operations in Baghdad.

No One Left Behind, a US nonprofit that advocates for SIV applicants, has advised the State Department on how to reduce bottlenecks in the application pipeline. It sounded that alarm as, much like in the Iraqi SIV program, thousands of Afghan interpreters were left waiting for approval before the Taliban’s lightning takeover.

“This should be a wake-up call for the Iraqi program,” said Mike Jabbar, an Iraqi SIV recipient and US Marine who works with No One Left Behind. “Because the US will eventually pull out of Iraq, and if we don’t start taking these guys out of the country, we’re going to have the same problem.”

Today, many Yazidis displaced by the 2014 massacre are reluctant to go back to Sinjar, where basic services are lagging and explosives still litter the ground. Much of the town’s original population remains in tented camps scattered across northern Iraq.

Chomer was afraid to set foot in his own house when he returned in April 2017. During his frantic escape three years earlier, the former interpreter had left behind potentially incriminating paperwork and photos with US troops.

“We were very afraid to go back to the house because there was so much evidence inside,” he said. “They destroyed everything.”

But Chomer says he is among the fortunate ones. His ransacked house, unlike many other Yazidi homes, was not rigged with improvised explosives.

Faced with the specter of renewed attacks, Chomer has spent the past seven years trying to navigate a nightmare of red tape so that he and his family can join the several thousand other Yazidis who call the United States home. His interview at the Baghdad embassy was canceled and securing an appointment in another consular office has proven challenging.

The uncertainty has left Chomer, his wife and three children in a sort of limbo state, unable to plan for a future in Iraq or the United States.

“You don’t know your fate or destination,” Chomer said of his situation. “You are just trying to live month by month, week by week, hoping that something will come at the end of the tunnel.”

“Little by little, we are losing hope,” he said.