Yazidis wary of going back to liberated Sinjar

Liberation of the Yazidi Iraqi town Sinjar from 16 months of IS occupation delighted everyone except thousands of Yazidi refugees who have no intention of going back. 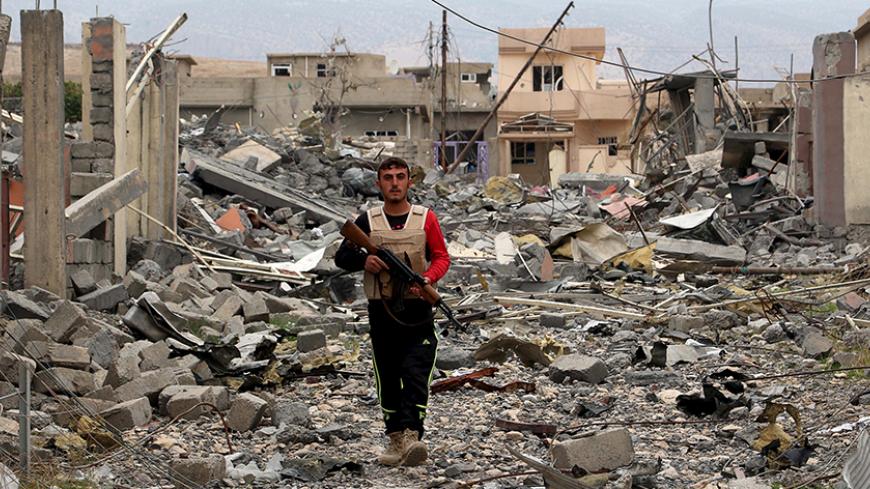 A volunteer from the Yazidi sect who has joined the Kurdish peshmerga forces walks with his weapon in the town of Sinjar, Iraq, Nov. 16, 2015. - REUTERS/Azad Lashkari

DIYARBAKIR, Turkey — The Shengal Camp along the Diyarbakir-Mardin highway has been animated in recent days. A crowd of people — including Selo Karo, his wife and four children, who have been living in this refugee camp — were waiting at the camp entrance with their bags.

They were waiting for their bus. That bus, however, will be taking them to Istanbul and not to Sinjar. Most of the Yazidis who have escaped to Turkey over mountain trails don’t have passports. They will first apply for passports at the Iraqi Consulate in Istanbul. Then what will they do?

“Sinjar has been liberated, but there are Arab tribes around it. We can’t go back. They can keep Sinjar. We are going to Europe. We will cross the sea. Either we will eat fish or fish will eat us,” Karo told Al-Monitor.

“We had enough of this life. Sinjar was a proper town; they razed it,” Karo added. “We lived in our own houses, now in tents. Nobody has been asking us what happened to [us] for more than a year.” Karo boarded the bus with his family to start a trip for a new hope.

People staying behind wave farewell. Havaf Hidir, 30, sent off his brother. He can’t decide whether to go. He is afraid. Nearly all Yazidis are afraid. It is not only the Islamic State (IS) attacks. Iraq has the biggest concentration of Yazidis in the world. Their holiest site, Lalish temple, is in the Iraqi Kurdish region. Yazidis had always been oppressed because of their religious beliefs. Muslims around them accused them of worshipping idols and harassed them.

Yazidis will tell you they had suffered 72 massacres in their history before last year, and the 2014 IS attack was the 73rd. Sinjar may have been liberated, but their fear remains. Navaf Hidir is also afraid. He told Al-Monitor that they are afraid of Arab tribes around Sinjar.

“We can’t go back now. We are afraid of Arab tribes and [IS]. We will go back only if we are allowed to rule our region and we are provided security. Otherwise, we stay here. If they take us, we will go to Europe,” he said.

The popular belief is that the Arab tribes that Karo and Hidir mentioned are supporting IS. They quote eyewitnesses who say Arab tribes had joined IS in its attack against Sinjar.

The biggest camp for Yazidis who escaped to Turkey after the IS attack is at Diyarbakir, where approximately 3,000 people live. The Diyarbakir Metropolitan Municipality pays the camp's expenses.

Yazidis appear to have adjusted to camp life. With social facilities, an infirmary and schools, it resembles a small town. They may not be very comfortable, but at least they are not afraid of getting slaughtered. Although they were happy when the Kurdish forces liberated Sinjar, they were not really excited.

Zarif Halef, who reached Turkey after days of walking over mountains, was talking to neighbors in front of her tent. It is all about Sinjar. They are debating whether they should go back. According to Halef, Sinjar is not yet fully liberated.

“As long as they stay in [IS’] hands, how come we talk of liberation? Sinjar is finished for us,” she added.

Yazidis in the camp are angry with the Kurdistan Regional Government of Iraq after they had the peshmerga forces retreat when IS first attacked instead of having them stay and fight. This created a deep sense of distrust.

Feleknas Uca, a Yazidi of Turkey who was elected to parliament on the Peoples’ Democratic Party ticket, emphasized the need to understand the psychology of the Yazidis.

“They have lived through 73 massacres. Their neighbors have stabbed them in the back. People they trusted harmed them. Thousands of people died. They can never be free from their problems wherever they go,” she told Al-Monitor.

“They now want to go to Europe to be free from their fears, but they won’t be. Those who attacked in Sinjar yesterday, today attacked in Paris. So many people got killed trying to get to Europe that doesn’t want them. This is not the solution. Yazidis have to understand this. Going to Europe is not their salvation.”

For Uca, the solution is at Sinjar. “The center of Sinjar has been liberated, but not its attached villages. When they are liberated, they will have to be rebuilt. Yazidis and their friends can do this. Their homes must be reconstructed, and they should defend them. They should not allow anybody else to enter Sinjar,” she added.

IS did not only kill thousands of Yazidis, but IS took their women prisoners. IS is estimated to be holding more than 5,000 Yazidi women. There were photographs circulating of these women being sold as slaves in Syria.

After the Kurdish forces liberated Sinjar, about 15 mass graves were found around it. In one, there were bodies of 76 Yazidi women.

Those hoping to reach Europe were not deterred when a group of Yazidis were turned from the Bulgarian border at Edirne and returned back to their camp. They said they have no choice but to try again.