About 20,000 Yazidis who have fled from the Islamic State and became refugees in Turkey are now hoping, perhaps in vain, to reach Europe. 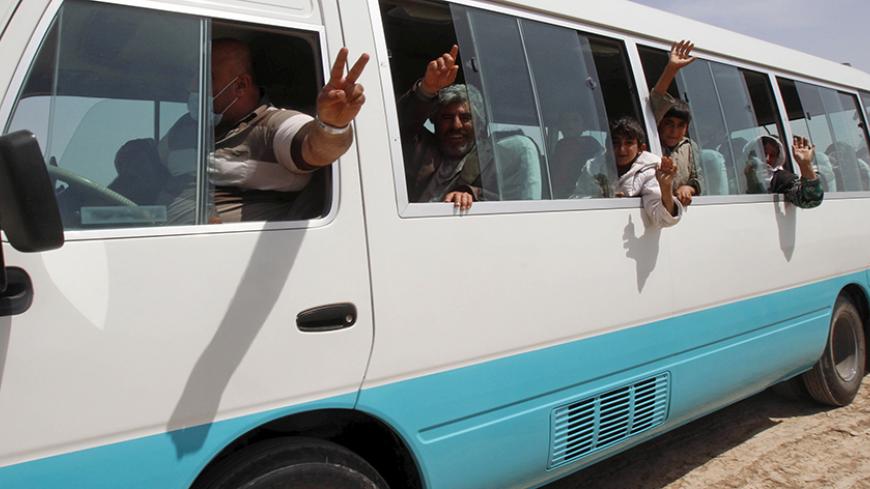 Members of the Yazidi minority sect are seen in a vehicle on the outskirts of Kirkuk after escaping captivity under the Islamic State, April 8, 2015. - REUTERS/Ako Rasheed

The Yazidi camp just outside Diyarbakir is very animated these days. As new groups arrive at the camp, where about 5,000 Yazidis who have fled from the Islamic State (IS) live, some are still trying to leave. There are incessant arguments between the Yazidis and the camp officials who are trying to stop them from leaving. But Yazidis are determined to go. Those who can’t find vehicles are walking under the searing sun to the Diyarbakir bus terminal, where they try to charter buses to take them to the Turkish-Bulgarian border.

In a park about 30 kilometers (18 miles) from the camp, four families wait for a bus. Women sleep under trees. Children run about. They say they had to walk for hours because no vehicle would take them. Among the refugees are Yazidi official Hikmet Salim and his wife and three children. He said life in tents had become unbearable.

Salim told Al-Monitor, “They rescued us from Sinjar and brought us to the camp. They have been looking after us for a year. We will not forget their kindness, but we are now forgotten. Nobody is helping us anymore. We want to go to Europe and for them to see how we have to live. There is no one more desperate than us. We have suffered everything, but we still have no rights. We’re going to Europe so that nobody would bother us and use us as political tools. Someone should help us to reach Europe. We will go, demonstrate and show ourselves. Maybe then they will receive us.”

Awdi said many people escaped from the camp on foot after officials closed the gates to stop them from leaving.

Gulistan Hasan was wounded in the IS attacks in the Sinjar Mountains and relies on a cane to walk. She said her people have suffered 74 massacres because they are Yazidis. She had to walk for eight days, during which many children died on the mountain trails. The Yazidis suffered in hot tents and couldn’t find milk for the children. She added, "We are human too. We have rights. If we go to Europe, nobody will treat us badly. We are born Yazidi and want to die as Yazidis. We are emigrating because we don’t want to be told we are heretics.”

This group of 40 people was able to leave the camp, where others were kept behind by security forces. They sit under the sun on the roadside, surrounded by soldiers. The lucky ones found some shade under a nearby bridge. There is palpable tension as they wait for news of the five buses that had already left for the Bulgarian border. Their passengers will wait for the rest at the Turkish border city of Edirne.

Several people and organizations tried hard to persuade the Yazidis to give up on reaching Europe. Newly elected Yazidi parliamentarians and Kurdish politicians have pleaded with them to change their minds, but couldn’t.

Azad Baris, Turkey Coordinator of the German Yazidi Cultural Foundation, is one of those trying to persuade the Yazidis, who say they can’t go back to IS-occupied Sinjar or stay where they are. Baris thinks some parties are exploiting the problems Yazidis face.

He said, “Yazidis don’t feel good. They feel denigrated and marginalized. They are still traumatized by war. They fear it may resume. We don’t yet know who is trying to exploit the Yazidis’ sentiments, but it could be some civil society organizations that had worked with Yazidis before. They tell the people, 'When you mass at their border, Bulgaria will open the border. If not, the UN will intervene and grant you status.’ They tell these people that once they are in western Turkey, it is easier to go to Europe. For us, this appears to be a dirty trick to empty the region from Yazidis. We tried to change their minds, but couldn’t. They won’t take a step back."

Yazidis at the camp told Al-Monitor that some Yazidis who have reached Edirne have been informed by Turkish officials that they won’t be allowed to cross the border into Bulgaria. Initial reports are not promising. The first group of Yazidis that reached Edirne were ousted from the city on orders of the governor.