Democratic lawmakers condemn four Middle Eastern states for the politically motivated imprisonment of a number of women and call for the prisoners' release. 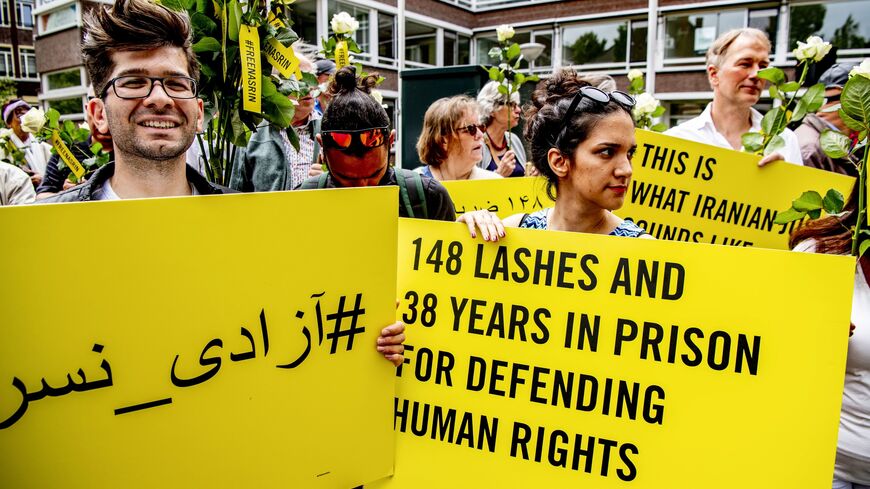 Supporters of Amnesty International campaign for the release of Iranian lawyer Nasrin Sotoudeh by observing her 56th birthday in front of the Iranian Embassy in The Hague, Netherlands, on May 31, 2019. The human rights lawyer was previously sentenced to 38 years in prison and 148 lashes for appearing in court without the hijab Islamic head covering and for another offense. Sotoudeh won the European Parliament's Sakharov Prize in 2012 for her work on high-profile cases, including those of convicts on death row for offenses committed as minors. - ROBIN UTRECHT/AFP via Getty Images

A group of Democratic senators introduced a resolution Tuesday condemning four Middle Eastern states for the unjust imprisonment of women.

Sen. Bob Menendez of New Jersey, who heads the Senate Foreign Relations Committee, sponsored the resolution along with eight other Senate Democrats, including Ben Cardin and Chris Van Hollen of Maryland.

The resolution included condemnations of Iran, Turkey, Egypt and Saudi Arabia for alleged political imprisonment of women. The senators demanded the release of the following women the lawmakers said were political prisoners.

Nasrin Sotoudeh, a human rights defender and attorney convicted in 2019 for her work, which included defending Iranian women arrested for taking off their head coverings. Sotoudeh will be eligible for parole after serving 12 years.

Atena Daemi, an anti-death penalty activist who was arrested in 2014.

Hatice Duman, the editor of the socialist news outlet Atilim who was been in custody since 2003. She was convicted of being a member of the banned Marxist Leninist Communist Party.

Aysenur Parildak, a journalist for the Zaman news outlet who was convicted in 2016. Menendez also called for her release last year.

Sanaa Seif, a prominent activist who was sentenced to a year and a half in prison in March for supposedly spreading fake news.

Maya’a al-Zahrani, an imprisoned women’s rights activist. A group of bipartisan senators also pressed the Saudi ambassador for her release in November.

The senators further called on the US government to raise the cases of "unjustly imprisoned" women in their dealings with the relevant countries.

The four states are regularly accused of human rights abuses, including by members of Congress — and not only against women. Iran, Egypt and Saudi Arabia are among the world leaders in executions.

In July, the US government accused Iran of plotting to kidnap an Iranian-American activist in New York, which prompted some Republicans in Congress to call for an end to the Iran nuclear deal talks.

The same month, Democratic Sen. Chris Murphy of Connecticut urged US President Joe Biden to freeze the United States’ extensive military aid to Egypt due to human rights concerns. Earlier this month, Egypt’s military released a video of a soldier shooting a seemingly sleeping enemy combatant, which led to condemnation from a prominent human rights group.

Many Democratic senators have grown increasingly critical of Turkey in recent years. Menendez, Van Hollen and others rebuked Ankara during a July hearing for its efforts to ban the leading Kurdish party in the country, actions in Cyprus and more.

Last year, a group of House Democrats criticized Saudi Arabia’s participation in the Group of 20 summit due to the US ally’s human rights record.

The senators also mentioned women imprisoned in China, Belarus and other states in the resolution.