Turkey has responded to some of the recent criticisms it has received from Democrats in Washington. The recent call from the Senate focuses Turkish support for Azerbaijan in the war with Armenia. 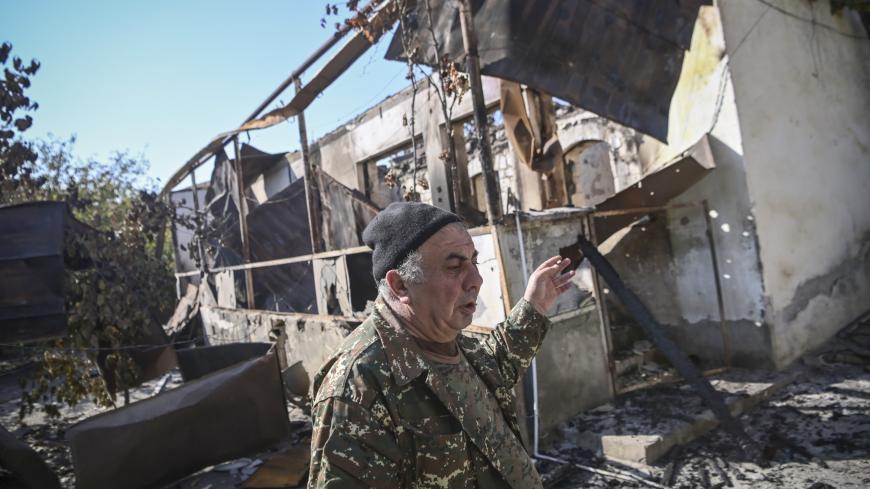 The mayor of the city of Martakert in Nagorno-Karabakh, Misha Gyurjian. gestures on Oct. 19, 2020, toward a house destroyed by shelling during the ongoing fighting between Armenia and Azerbaijan over the disputed region. - ARIS MESSINIS/AFP via Getty Images)

A group of Democratic senators is demanding the US government look into alleged human rights abuses committed by Turkey and its ally Azerbaijan. This comes amid increasing criticism of Turkey from Democrats as well as Azerbaijan’s ongoing war with Armenia.

On Thursday, Sens. Bob Menendez of New Jersey, Chris Van Hollen of Maryland and several others introduced two resolutions for US Secretary of State Mike Pompeo. The resolutions, which are nonbinding, ask the top diplomat to conduct an inquiry into human rights abuses by Turkey and Azerbaijan, according to a press release.

The lawmakers passed the resolution in response to the Nagorno-Karabakh conflict. In late September, fighting broke out between Azerbaijan and Armenia over the long-disputed territory, which is internationally recognized as part of Azerbaijan but controlled by Armenia. Turkey backs Azerbaijan militarily and has historic, linguistic and cultural ties to the country.

“With full support from Turkey, Azerbaijan has attacked population centers, killing and wounding hundreds of civilians and driving more than half of Nagorno-Karabakh’s population from their homes,” the senators said.

The resolution on Turkey also asked for information on Ankara’s actions in Syria, Iraq and Libya. In Syria, Turkish-backed Syrian rebel forces control parts of the north and have been accused of various human rights abuses. In Iraq, Turkey frequently bombs the Kurdistan Workers Party, which has been at war with the Turkish state for decades. In Libya, Turkey backs the UN-recognized Government of National Accord against eastern-based rebels.

Turkey has come under fire from some in Washington this year — especially Democrats. In October, the Democratic presidential nominee Joe Biden criticized Turkish support for Azerbaijan. Also this month, Menendez and other Senate Democrats successfully lobbied the Library of Congress to refer to the 1915-23 killings of ethnic Armenians by the Turkish government as a “genocide.”

Turkey has fought back against some of the recent criticisms. In September, the speaker of the House, California Democrat Nancy Pelosi, unfavorably compared US President Donald Trump to Turkish President Recep Tayyip Erdogan. Turkish Foreign Minister Mevlut Cavusoglu accused Pelosi of “blatant ignorance” in response, and called her high-ranking position in the House of Representatives “truly worrisome for American democracy.”