The Democratic presidential nominee also said Trump should work to de-escalate the war in the Caucus. Turkey has come up in the US presidential race before. 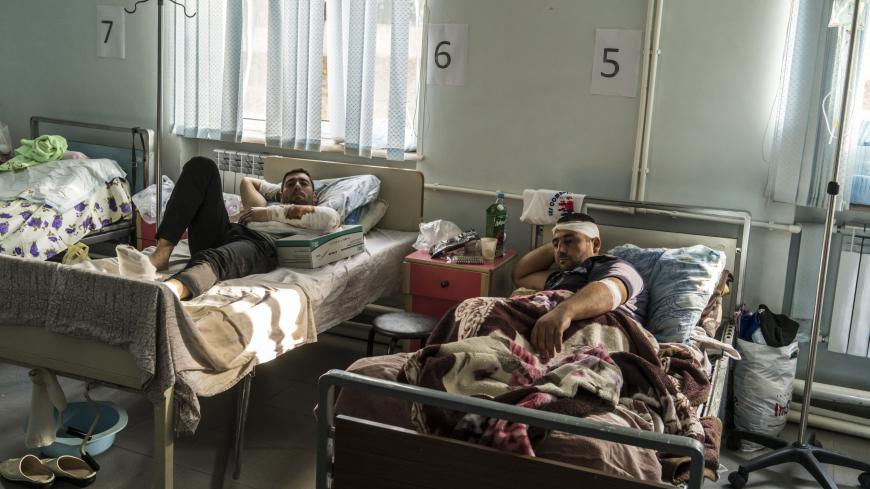 Arthur Arshakyan (L), a civilian, and Aghajan (R), a member of the Armenian military who did not provide his last name, lie in their hospital room at the Children's Medical Center on Sept. 29, 2020, in Stepanakert, Nagorno-Karabakh. Heavy fighting has taken place since Sept. 27 in the territory, with both sides reporting military and civilian casualties in perhaps the worst violence since 2016. - Brendan Hoffman/Getty Images

US presidential candidate Joe Biden today called on Turkey to stay out of the Azerbaijan-Armenia conflict.

Policy involving Turkey constitutes a difference between the Democratic Party nominee and US President Donald Trump as they head into their first debate tonight.

Biden also said that the Trump administration should work to keep Turkey from involving itself in the war. Turkey supports Azerbaijan militarily and politically.

The Trump administration “must also demand others — like Turkey — stay out of this conflict,” Biden said.

Azerbaijan and Armenia have been at odds over the Nagorno-Karabakh region since the final years of the Soviet Union. The area is recognized internationally as part of Azerbaijan, but Armenian-backed forces have been in control there since 1994. Both sides have attacked the other numerous times since the late 1980s. Turkey has historic ties to Azerbaijan and Azerbaijani is a Turkic language.

The current round of fighting broke out Sunday. Azerbaijan and Armenia both rejected peace talks today, despite urging from the United States and Russia. Dozens have been killed so far, according to Reuters.

Trump and Biden differ somewhat on US policy toward Turkey and the subject is an election issue. Last year, Trump announced the repositioning of US troops in northeast Syria to pave the way for Turkey’s incursion against Kurdish-led forces there. Biden criticized the move on the campaign trail.

Biden also called Turkish President Recep Tayyip Erdogan an “autocrat” in 2019. Trump, on the other hand, has often been seen to have a relatively good relationship with the Turkish leader. Trump also has business connections to Turkey via the Trump Towers in Istanbul.

Some of Biden’s fellow Democrats have criticized Trump’s connections with Erdogan during the 2020 election. Last week, Trump was asked by reporters about the transition of power if he were to lose in November. Trump responded by criticizing mail voting. Speaker of the House Nancy Pelosi knocked Trump for seemingly saying he would refuse to concede the race. She then compared Trump’s governance to Erdogan’s in Turkey.

“He admires Erdogan,” Pelosi said Thursday. “He admires people who are perpetuating their role in government.”

“You will learn to respect the Turkish people’s will,” tweeted Cavusoglu at Pelosi. The top diplomat also mentioned Trump in the tweet.

Turkey has sought to involve itself in the US presidential election before. In June, Erdogan told Trump that the left-wing antifa movement in the United Staes works with the US-backed People’s Protection Units (YPG) in Syria. The United States supports the YPG in its fight against the Islamic State and Turkey attacked the YPG last year following the US troop repositioning. Trump is critical of antifa due to the loosely affiliated anti-fascism movement’s involvement in violence and riots at US anti-police protests. Former foreign fighters in the YPG told Al-Monitor at the time that there were antifa supporters in the YPG, but that most foreign volunteers did not hold such views.

Trump and Biden square off for their first presidential debate tonight. Host Chris Wallace of Fox News did not put foreign policy on his list of debate topics, though Trump has been bringing up some Middle East issues in his reelection bid as of late.