Democratic Senators said the library should follow Congress and rebuke the Trump administration by referring to the killings of Armenians in Turkey in the early 20th century as a "genocide." 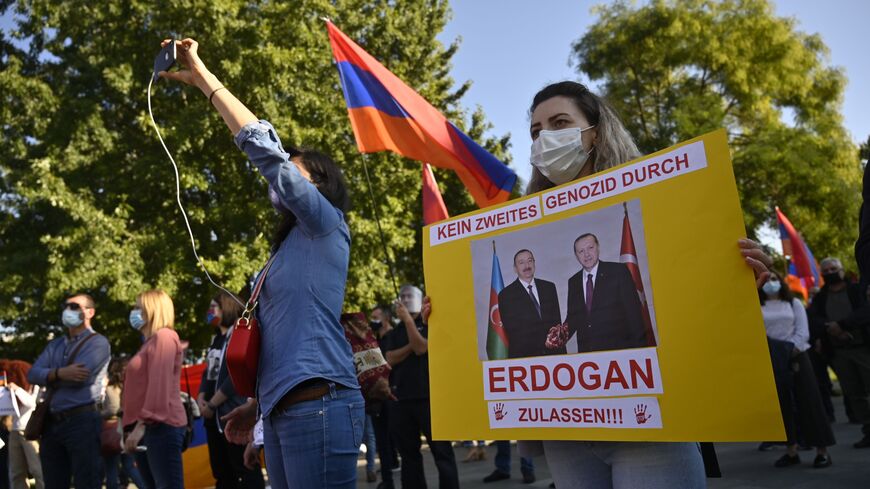 A woman holds a placard reading "Do not allow a second genocide by Erdogan" during a protest organized by the Armenian community in front of the chancellery in Berlin on Sept. 30, 2020, protesting Turkish backing for Azerbaijan in the fighting in Nagorno-Karabakh, a largely ethnic Armenian region that broke away from Azerbaijan in the 1990s. - JOHN MACDOUGALL/AFP via Getty Images

Senate Democrats wrote a letter to the Library of Congress on Wednesday demanding the national institution refer to the 20th century killings of Armenians in Turkey as a “genocide.” The move comes at a time of friction between some members of Congress and the Trump administration on Turkey, and as Turkey has backed Azerbaijani forces against Armenian ones in the breakaway region of Nagorno-Karabakh.

Robert Menendez of New Jersey, who is the highest-ranking Democrat on the Senate Foreign Relations Committee, signed the letter along with fellow Democratic Sens. Chuck Schumer of New York, Sheldon Whitehouse of Rhode Island and Elizabeth Warren of Massachusetts.

The term Armenian genocide is often used to refer to the killings and forced displacement of Armenians from 1915-23 by Turks; Greeks and Assyrians were also killed. The Turkish government admits there were deaths, but adamantly disputes the events constituted a genocide.

The Library of Congress currently refers to the period as the “Armenian massacre” in its database. The senators wrote the letter in support of recent efforts by the University of California, Los Angeles and the Armenian National Committee of America to change this phrasing.

The Library of Congress’ position is consistent with that of the executive branch, which does not recognize the events as a genocide. The senators said the library should do so, however, because Congress does recognize the Armenian genocide.

“There is no statutory or constitutional basis for the Library of Congress to choose the State Department as the U.S. foreign policy authority on this topic over the U.S. Congress,” wrote the senators.

“The scholarly consensus is clear that ‘Armenian Genocide,’ not ‘Armenian massacres,’ is the most accurate description of this tragedy,” they added.

In December, the Senate voted to recognize the Armenian genocide, following the House of Representatives vote to do the same in October  2019. The administration of US President Donald Trump did not follow suit.

The United States has avoided recognizing the genocide for years so as not to harm relations with Turkey, which is an important NATO ally.

A Democratic Senate aide told Al-Monitor that the letter was also sent because of the Trump administration’s refusal to recognize the genocide.

US-Turkey relations improved in October 2019 when Trump repositioned US troops in northeast Syria, which allowed Turkey to attack Kurdish forces there. Many Democrats criticized the move.

Some members of Congress continue to criticize Turkish policy. In August, Menendez and Democratic Sen. Chris Van Hollen of Maryland wrote to US Secretary of State Mike Pompeo to demand he place sanctions on Turkey over its drilling and naval activity in the eastern Mediterranean. Greece, Cyprus and the European Union believe the areas in question are Greek and Cypriot territory.

There are Republicans in Congress critical of Turkey as well. In a September Senate hearing with State Department officials, Republican Sen. Todd Young of Indiana took a shot at Turkish President Recep Tayyip Erdogan.

Turkey has not responded to the Senate letter to the Library of Congress. When the Senate voted to recognize the Armenian genocide last year, Turkish Foreign Minister Mevlut Cavusoglu dismissed it as a “political show.”

Democratic presidential nominee Joe Biden has also criticized Turkey on the campaign trail recently. This week, the former vice president called Turkish support for Azerbaijan in the war with Armenia over the Nagorno-Karabakh region “irresponsible.”

The Senate letter does not mention the Nagorno-Karabakh conflict.