The national library refers to the killings of Armenians in early 20th-century Turkey as "massacres," but agreed to call them "genocide" after being urged to do so by Senate Democrats. 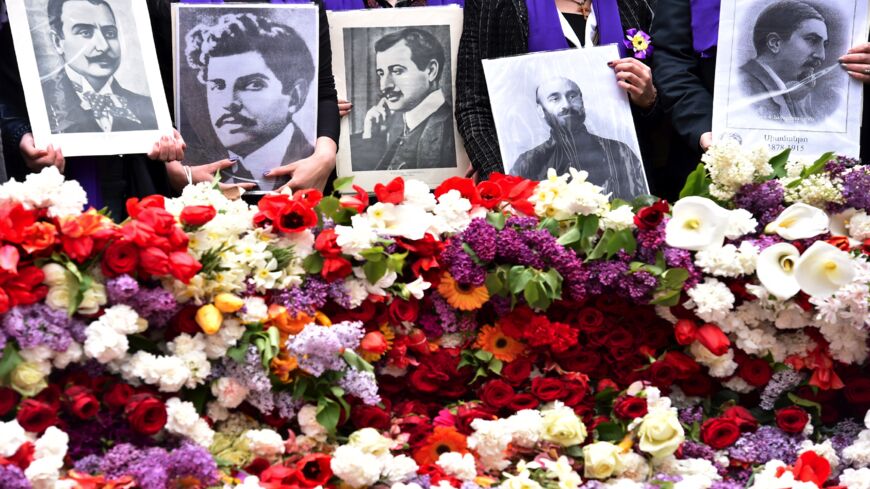 People holding photographs of (L-R) Armenian writer Krikor Zohrab, Armenian poet Ruben Sevak, Armenian poet Daniel Varoujan, Armenian priest and composer Komitas, and Armenian writer Siamanto, who were among the Armenian intellectuals arrested by Ottoman forces in 1915, attend a flower-laying ceremony at the Tsitsernakaberd Memorial, on April 24, 2015, in Yerevan, as part of the Armenian genocide centenary commemoration. Armenians on April 24 marked the centenary of the massacre of up to 1.5 million of their kin by Ottoman forces. - KIRILL KUDRYAVTSEV/AFP via Getty Images

The Library of Congress will start referring to the killing of Armenians in early 20th-century Turkey as “genocide” after being asked to do so by the Senate.

On Wednesday, Sens. Bob Menendez of New Jersey and Chuck Schumer of New York said that the Library of Congress’ catalog will now use the term “Armenian genocide.”

“We applaud the Library of Congress’s decision, which reflects both scholarly and congressional consensus,” the Democratic senators said in a statement. “This determination is another victory for those who value the truth and believe in the importance of the words ‘Never Again.’”

The Armenian genocide refers to the systematic killings and expulsions of Armenians in modern-day Turkey from 1914-23. The Turkish government strongly disputes the events consisted of genocide, though it acknowledges killings occurred. Greek and Assyrian people were also killed at the time.

Both the House of Representatives and the Senate voted to recognize the genocide last year, but US President Donald Trump did not follow suit. The United States has avoided calling the period a genocide because of its important relationship with NATO ally Turkey.

Last week, Menendez, Schumer and other senators sent a letter to the Library of Congress arguing that the institution should follow Congress on the matter — not the executive branch.

As of Thursday, the Library of Congress website still used the term “Armenian massacres.” Library staff did not immediately respond to Al-Monitor’s question on when the change would be made.

The senators’ push to change the name comes at a divisive time in US-Turkish relations, with several prominent Democrats criticizing Turkish policy recently. Last week, the Democrats’ presidential candidate, Joe Biden, demanded Turkey stay out of the Nagorno-Karabakh war between Armenia and Azerbaijan.