Democratic and Republican senators voiced heavy criticism of the Turkish government to a State Department official during a Wednesday hearing. The lawmakers accused Ankara of abusing the international police system, being an “aggressor” toward Greece, and much more. 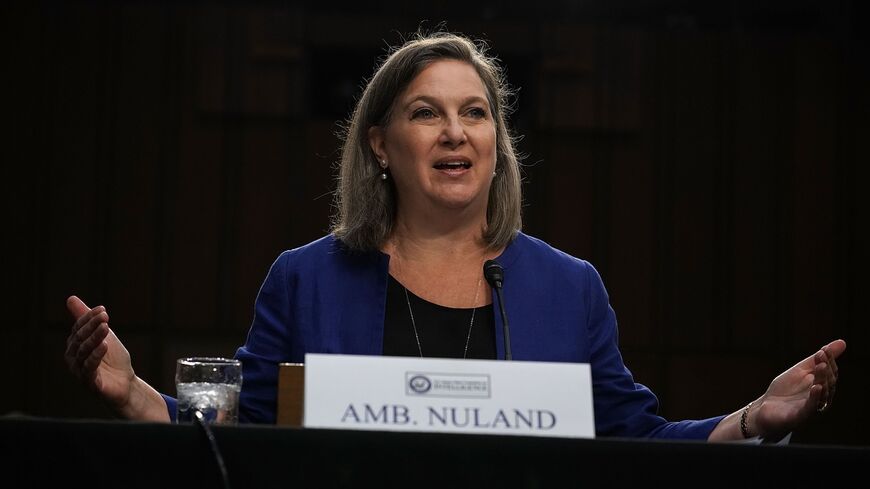 Victoria Nuland testifies during a hearing before the Senate Intelligence Committee June 20, 2018, on Capitol Hill in Washington. Nuland, now the undersecretary of state for political affairs, testified before Senate Foreign Relations Committee on July 21, 2021, about Turkey. Her 2018 testimony was about Russian Interference in the 2016 US elections. During the Obama administration's second term, Nuland was assistant secretary of state for European and Eurasian affairs. - Photo by Alex Wong/Getty Images

US senators criticized Turkish government policies during a Wednesday hearing, and demanded more action from the Biden administration.

“Erdogan doesn’t care what we say,” said Van Hollen. “It’s going be up to us to take action, to defend the rule of law, to defend democracy so Turkey does not set an example for others to be unfaithful NATO allies.”

The Senate Committee on Foreign Relations held a hearing on US policy toward Turkey on Wednesday. Victoria Nuland, the undersecretary of state for political affairs, testified before the influential committee. Turkey is a NATO ally of the United States, though relations have soured in recent years, particularly over US support for Kurdish fighters in Syria that Ankara is in conflict with.

The lawmakers, both Democrats and Republicans, voiced strong opposition to a number of Turkish policies. Democratic Sen. Bob Menendez of New Jersey referred to reports that Turkey is building a drone base in disputed Cyprus toward the start of the hearing.

“Is Turkey establishing a drone base in occupied Cyprus? My information is that they are,” Menendez, who heads the committee, said to Nuland.

Nuland did not confirm the administration’s awareness of the drone base, but said such a base “would obviously be destabilizing.”

Menendez is a critic of the Turkish government. He also addressed Turkey’s offshore drilling activity in the eastern Mediterranean in waters claimed by Greece and Cyprus. Menendez said the Biden administration was being illogical in calling for both sides to negotiate, accusing Turkey of being the sole “aggressor” on the issue.

“We can’t be calling on both sides to try to negotiate in good faith when one is the aggressor,” he said. “We make a huge mistake when we don’t acknowledge who the aggressor is.”

Menendez and other senators also expressed concern over the Turkish government’s efforts to ban the Peoples’ Democratic Party (HDP). The opposition party supports the rights of Turkey’s Kurdish minority. The chairman said Turkey’s 2023 elections would be illegitimate if the HDP gets outlawed.

“Those elections could not have validity,” he said. “That’s like if President Biden banned the Republican party from participating. C’mon.”

Ankara accuses the HDP of being linked to the Kurdistan Workers Party (PKK), which is considered a terrorist organization by both Turkey and the United States. Nuland acknowledged Turkey’s legitimate concerns about the PKK, but said Turkish efforts to ban the HDP are part of the Biden administration’s “larger concern” about democracy in Turkey.

“It’s a far different matter to use terrorism as an excuse to eradicate political pluralism or ban individual parties,” she said.

Turkey has sent at least hundreds of arrest requests to the international police organization Interpol for alleged coup participants, and has successfully detained such individuals around the world. Murphy accused Turkey of an “overuse” of Interpol's resources on the matter.

Nuland agreed with the senator.

“You are not wrong,” she told Murphy. “When the Interpol system is flooded with cases that do no meet standards, it sucks up time and energy and money.”

Many observers expected Biden to usher in a cooler era of US-Turkey relations, in part due to Biden’s criticism of the NATO ally while he was running for president. Turkey opposed Biden's April recognition of the Armenian genocide. The relationship appeared to somewhat improve after Biden and Erdogan met in person in June.

Nuland was somewhat upbeat about US-Turkey ties at times during the hearing. She called Turkey’s ambassador to Washington, Murat Mercan, “very engaging” and lauded his efforts to repair the “obviously deteriorating” relationship.

The hearing touched on numerous other issues, including US opposition to Turkey’s purchase of Russia’s S-400 missile defense system. Republican Sen. Jim Risch of Idaho, who is the ranking member of the committee, called the deal “very troubling.” Nuland assured the senator that the administration would continue to exclude Turkey from the F-35 fighter jet program in response.

Nuland did not offer any updates on the imprisonment of Turkish employees of the US diplomatic mission in Turkey, but said their release is a “top concern” of the administration.

She also declined to speak during the hearing about Turkey sending Syrian rebel forces to Azerbaijan last year during the Nagorno-Karabakh conflict with Armenia, pledging to address the matter in a separate session.

On US support for Kurdish forces fighting the Islamic State in northeast Syria who are being targeted by Turkey, Nuland said, “At this stage, we’ve agreed to disagree.” She specifically referred to the People’s Protection Units, aka YPG, and the YPG-led Syrian Democratic Forces.